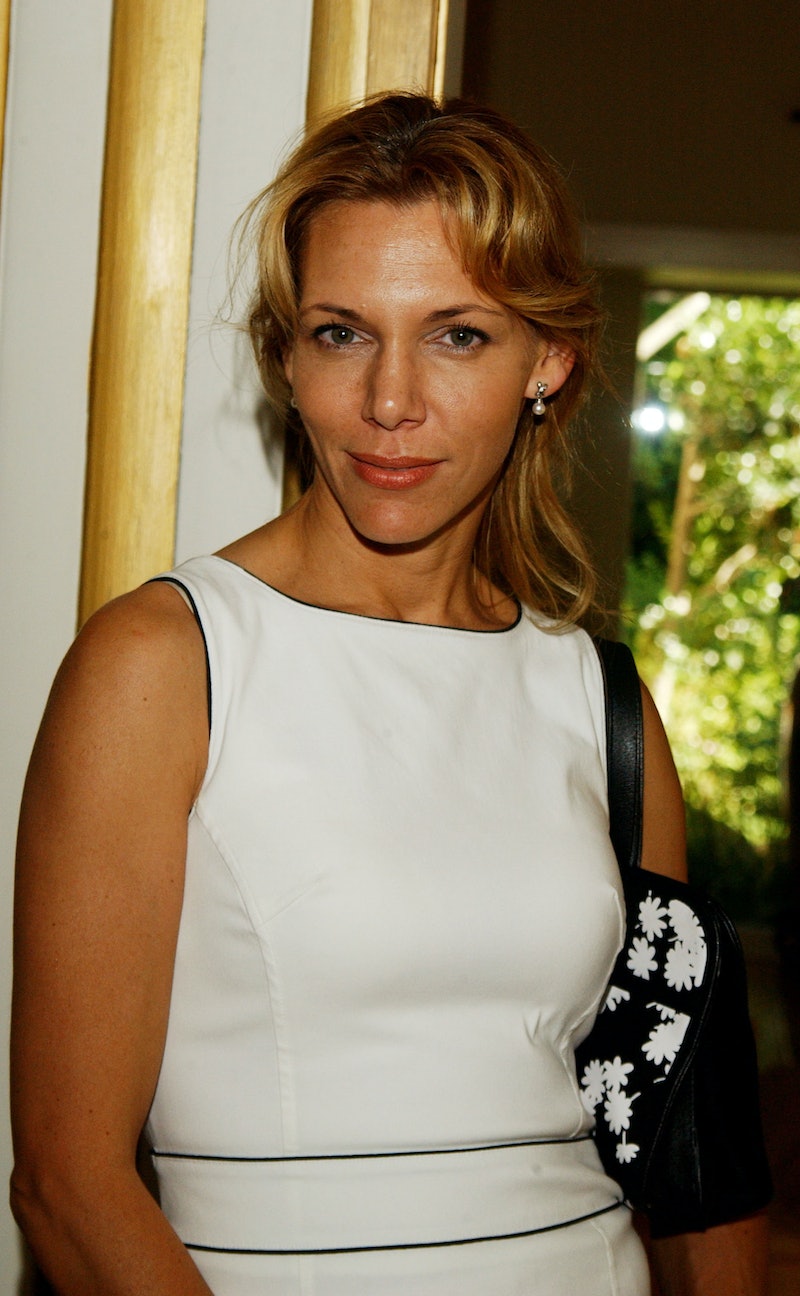 Woody Allen's relationship with Soon-Yi Previn has been widely publicized since 1992, when he confirmed in a press conference that the rumors about them were "happily all true." But as outlined in Allen v. Farrow, HBO's new docuseries chronicling Dylan Farrow's claim that Allen sexually assaulted her when she was 7, Previn was allegedly not the first significantly younger woman Allen was involved with. (Allen has repeatedly denied Dylan's claim).

In 2018, actor Christina Engelhardt claimed she'd had a secret eight-year relationship with Allen beginning when she was 17 and he was 41. (Allen has not commented on Engelhardt's claim). She described herself as a willing participant in the relationship but said she has complicated feelings about the nature of it, particularly in the wake of the #MeToo movement. "What made me speak is I thought I could provide a perspective," she told The Hollywood Reporter at the time. "I'm not attacking Woody. This is not 'bring down this man.' I'm talking about my love story. This made me who I am. I have no regrets."

Engelhardt also appears in Allen v. Farrow, where she explains that she was "very much in love" with Allen but that their romance has "taken a toll" on her and the way she's engaged in other relationships. Some have speculated that she got involved with Allen when she was 16 — before the legal age of consent in New York — but Engelhardt maintains in the docuseries that they didn't begin a sexual relationship until she was 17. Here's a breakdown of the full timeline.

Engelhardt is born in rural New Jersey to a "strict German immigrant household," per The Hollywood Reporter. Because she grew up in a predominantly Jewish area as a German child, she "wasn't confrontational because I thought, 'Nobody likes Germans.' "

Engelhardt says in the series that when she was between 12 and 14 years old she was sexually assaulted by "people my family knew." She says she became "enchanted" with Allen because she felt like she had no one else to rely on.

At 16, Engelhardt spots Allen at the New York restaurant Elaine's. She drops a note on his table with her phone number and the message, "Since you've signed enough autographs, here's mine!"

She claims Allen then invited her over to his Fifth Avenue penthouse, adding that he never asked for her age but knew that she was still in high school and pursuing modeling.

According to Engelhardt, she and Allen begin a sexual relationship after her 17th birthday.

Engelhardt and Allen's alleged relationship continues for about eight years. She says he had two rules: they wouldn't discuss his work, and they would only meet at his place.

"I never once stayed overnight. It was only for a couple of hours, including sex," Engelhardt told The Daily Mail. "A glass of wine, a little chit-chat, a game of chess and some sex. Then it was always, 'OK. Time to go. Next time you’re in the city let me know.'"

Engelhardt claims that a year into the relationship, Allen began bringing in two other "beautiful young ladies" for threesomes.

Allen and Farrow are formally introduced at Elaine's, the same restaurant where he met Engelhardt, after meeting in passing several years earlier. The two end up dating for 13 years.

Around the same time, Engelhardt secures work as an extra on Allen's 1980 film Stardust Memories. "I didn't even see him there; it may have been second-unit," she told THR. "My dream was that he'd have seen me and pulled me out from the crowd. But I showed up with the crowd and left with the crowd." She never told him she'd been there.

She also begins taking acting classes with Stella Adler and Lee Strasberg, but becomes hurt when Allen refuses to assist her in obtaining a SAG card.

Engelhardt says that after four years of sleeping together, Allen told her he wanted to introduce her to his new girlfriend, Mia Farrow.

This shocked Engelhardt, who had presumed she was his girlfriend. "I felt sick. I didn't want to be there at all, and yet I couldn't find the courage to get up and leave," she wrote in her biography manuscript, per THR. "Looking back now, that's exactly what I needed, but back then, the idea of not having Woody in my life at all terrified me."

Engelhardt claims that she overcame her jealousy over the course of a "handful" of threesomes with Allen and Farrow at his apartment. While it was "great fun" for her, she said that "the whole thing was a game that was being operated solely by Woody, so we never quite knew where we stood." She added that she was always under the impression that Farrow only did it because Allen wanted it.

Engelhardt says she grew unhappy in her relationship with Allen, and told the Daily Mail that the final straw was when he refused to help her with her acting career. In 1983, she leaves New York to move to Rome. Years later, she begins working as an office assistant to filmmaker Federico Fellini. One day Allen calls to speak to Fellini and she picks up. "He said, 'You're with Fellini — you left me for Fellini?! That's so cool!'" she told THR. In her mind, Allen only valued her once he believed a man he looked up to, Fellini, had wooed her. (He hadn't.)

According to Dylan Farrow, this is the day Allen sexually assaulted her. (Allen has repeatedly denied the allegations.)

Allen releases a statement confirming his relationship with Previn to the press. A day later, he calls Mia Farrow's accusations of child abuse "false" and "outrageous."

"I felt sorry for Mia" when the Previn news broke, Engelhardt told THR. "I thought, 'Didn't Woody have enough 'extra,' with or without her, that the last thing he had to do was to go for something that was totally hers?'" She continued: "He had groomed Mia, trained her, to put up with all of this. Now he had no barriers. It was total disrespect."

According to Engelhardt, this is the last time she and Allen had any correspondence. She says he sent her a letter thanking her for sending him a copy of The Voice of the Moon, Fellini's final film. "I hope you're happy and well," Allen wrote. "I recall our times together fondly. If you're ever in New York I would love you to meet my wife [Previn] — she'd like you. We get out to California every so often. If you'd like I'd call and perhaps we could all get together."

Engelhardt assumed he did not mean a "platonic" get-together, and she "just wanted to stay away from that."

Dylan goes on record for the first time about Allen's alleged abuse in an interview with Vanity Fair.

Amidst the #MeToo movement, Engelhardt shares her story for the first time with The Hollywood Reporter.

Today, Engelhardt is divorced and living with her two college-aged daughters in Beverly Hills.