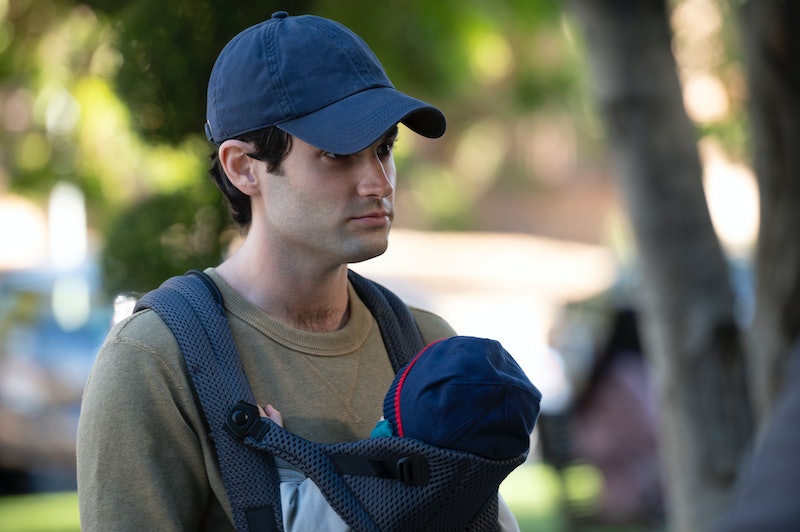 If you thought you’d seen the last of Joe Goldberg (or can’t wait for him to finally get his comeuppance), fret not: YOU Season 3 will debut on Oct. 15, 2021.

The new season will find Joe and Love married and raising their baby together in Madre Linda, a quiet California suburb filled with tech entrepreneurs and mommy bloggers — basically, the exact kind of people Joe hates. Though he’s determined to be a “good” husband and father, his pathological impulses are still present as ever, and he finds himself fixating on a new obsession: the next door neighbor. Meanwhile, he fears Love’s lethal tendencies and the kind of trouble it could create for them.

It’s been over a year since we saw Joe fall for Love, and fans have come up with plenty of theories about their new life since then. Read on for the best seven.

As Reddit user byrd82 points out, the circumstances surrounding the death of Love's first husband were very vague and could indicate that she played a part in his death. "When Love’s ex-husband tells her he is not interested in having a family, she is disappointed," byrd82 writes. "He becomes ill shortly after. We are told he was ill with a stomach issue, and that after ‘tests’ they never find out what killed him."

Love previously tampered with her baking in order to prove a point to Joe (using salt instead of sugar to make him muffins), and we know that she’s impulsive. If her husband displeased her, it’s possible that she could've poisoned his food to get back at him. And if Joe’s eye begins to wander in Season 3, Love might set her sights on him next.

At the end of Season 2, Love showed Joe her true colors and the lengths that she'd go to in order to protect the ones she loves. Though she and Joe are currently living out a fantasy life in the suburbs, Reddit user thehagridaesthetic thinks that Joe's plan is to kill Love once the child is born, then seek to find a better mother for his baby in whatever new obsession he stumbles upon. Considering how devious Love has proven to be, that plan may be a little easier said than done. She won’t go down without a fight, and honestly seems way more proficient at killing than Joe is.

The Real Will Bettelheim Will Return

Reddit user HelpWheresMyDad thinks that the original Will Bettelheim will return in Season 3 and become obsessed with Joe. Will has always been very forgiving of Joe's actions, so it'd be interesting if he flipped the script on his former captor, turning the stalker into the one being stalked.

Joe Will Go to Jail

Reddit user Runoutofideas777 surmises that Joe has to go to jail at some point in Season 3. There are plenty of people who are now suspicious about him: the cop from Peach’s house and Delilah’s cop friend in Season 2, Candace’s friend from college, and Ellie, among several others. For a serial killer, Joe is actually pretty bad at covering up his tracks, and maybe that will finally catch up to him.

Reddit user vagueposter theorizes that Love will realize Joe is infatuated with the woman next door and kill her. Then the cops will get involved, and Love might even pay Joe off in exchange for him leaving to preserve their family’s image. Joe would move somewhere new, and the cycle would just start again.

As BigfootsBestBud pointed out, every season Joe has stalked a woman who returned his affections. But they hope that the new neighbor either “completely sees through” him, or only likes him platonically and “yet he continues his usual ‘romantic’ delusional obsession.” We’ve never actually seen how Joe would act if he was rejected by a woman he liked, so it would be interesting to see a new perspective.

Considering Love has the brains, money, and resources, some fans on Reddit are convinced she’ll eventually kill Joe — either because he cheats on her or because he turns out to be a bad husband or dad. Fans like Reddit user stvhght would love to see Love off Joe and become the central character on the show, and this would actually line up with what star Penn Badgley wants to see for his character. When asked by Entertainment Tonight what Joe deserves, Badgley simply answered, “Death.”

More like this
Netflix Shut Down 'Bridgerton' S3 Rumours About A “Very Dark” Storyline
By Bustle
'Wednesday' Star Emma Myers Thinks A Wenclair Storyline Is “Possible” In Season 2
By Alyssa Lapid
You Might Want To Rewatch This Key 'On My Block' Scene To Understand 'Freeridge'
By Grace Wehniainen
The 'Freeridge' Cast Shared Their Hopes For A Potential Season 2
By Grace Wehniainen
Get Even More From Bustle — Sign Up For The Newsletter
From hair trends to relationship advice, our daily newsletter has everything you need to sound like a person who’s on TikTok, even if you aren’t.

This article was originally published on Dec. 31, 2019