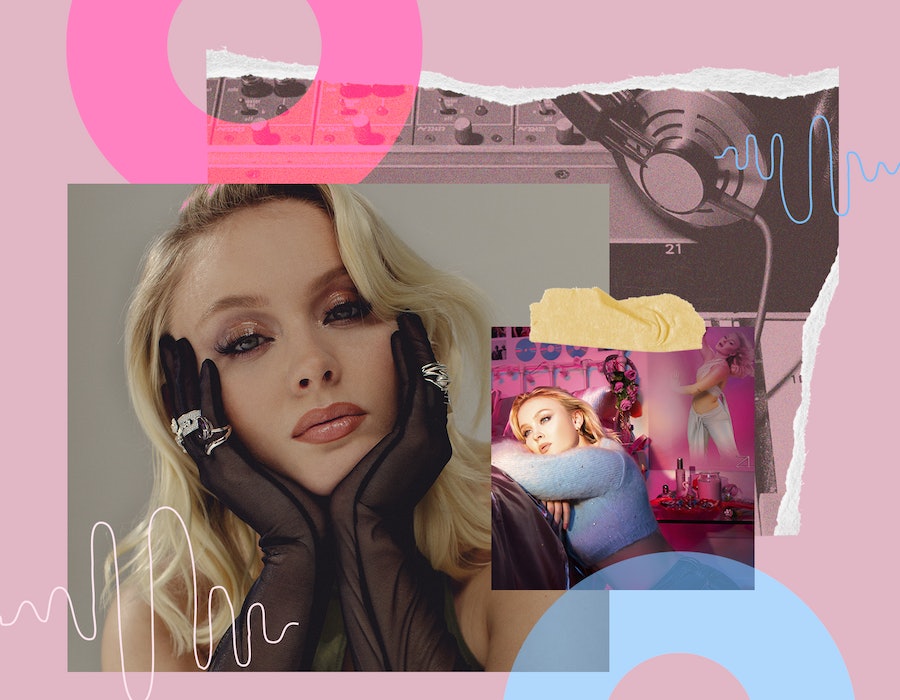 Zara Larsson was expecting to feel a wave of anxiety following the release of her new album, Poster Girl. But now that it’s out in the world, she’s surprised to not only feel calm, but “really satisfied.” Four years after the release of her breakthrough album, So Good, which spawned four chart-topping hits in the United Kingdom, Larsson put a lot of pressure herself to match its success. “I’m the type of person who always wants to be #1, and if I’m not #1 then I’m like, ‘What’s the point?’” the 23-year-old pop star tells Bustle over Zoom from her home in Sweden. “But that takes away the fun, 'cause it’s hard to be #1, and you’re not gonna stay there forever. Someone else has to take the spot eventually.”

While creating Poster Girl, Larsson often left the studio thinking she had another handful of smash hits on her hands. But despite widespread acclaim from critics and fans alike, she was disappointed when pre-released singles like “Love Me Land” and “WOW” didn’t climb the charts. “More than the quality of the music, I think [charts are] a popularity contest in a way, and who doesn’t want to be popular?” she explains. “If I didn’t care at all I would just sing in a small jazz bar and be happy with the people sitting at the bar, drinking whiskey, and listening to me sing.”

Crafted alongside hitmakers including Justin Tranter, Julia Michaels, and the legendary Max Martin, Poster Girl is 12 tracks of rapturous pop perfection inspired by fellow Swedish acts ABBA and Robyn (“Look What You’ve Done” and “Right Here”) and the ongoing disco revival ushered in by the likes of Doja Cat and Dua Lipa (“FFF”). After repeatedly delaying its release due to the pandemic and admittedly being “scared of failure,” Larsson finally felt ready to put it out. “I could’ve released four albums in this time, but I’ve learned a lot, and I’m really happy with how it sounds,” she says. “I’m giving this away to the people, and it’s up to them what they want to do with it.”

Since Poster Girl’s release, Larsson has been busy on the promotional trail, performing everywhere from The Ellen DeGeneres Show to her own International Women’s Day livestream concert on YouTube. With over half a million views on the livestream and Poster Girl hitting #1 on U.S. iTunes, the pop star’s perfectionism is paying off. Below, Larsson discusses working with Ariana Grande, writing her international hit “Never Forget You,” and the idea of performing at her own wedding.

On Collaborating With Ariana Grande & Her Drug Of Choice

From “Never Forget You” to “Symphony,” some of your biggest hits have been collaborations. Why did you decide to keep this album mainly solo?

I wanted to keep it completely solo, but I also wanted "Talk About Love" on the album, and I wanted it to have a feature. I knew that since the first time I heard it. But yes, I have collaborated with some amazing artists, and I think for the next album I would love to collaborate with specifically more women.

Who are a few women you’d like to get in the studio with?

Don’t you and Ariana already have a song together?

Not really. She did backing vocals. You can't really hear her. She was just in the studio, and she was like, "Yeah, I can join the background vocals." But I would love to have her as a feature or vice versa. I would [also] love to do something with Robyn.

You recently said Poster Girl’s title track is inspired by your love of weed. What’s your relationship with marijuana?

Starting out, I was just a rebel teenager. I'm the type of person who wants to do everything, especially the things you're not supposed to do. I just wanted to try it, and also looking at my idols I was like, "Well, Rihanna does it. How bad can it be?" My parents’ generation grew up under the war on drugs, which was like, “Every drug is bad.” It was super taboo [in Sweden]. But when I moved to LA, I was like, "Oh, it's chill. I'm not dying like my mom told me that I would.” I just get really bad anxiety from drinking, and I think every person wants to have some form of intoxication, whatever that might be. It made me feel relaxed and calm.

But now I'm in this period where I'm actually gonna take a break ... just because [it’s easy for me to get] super into something, and then I just do that all the time. Last year I wasn't doing anything, which led to me just laying on my couch and only smoking weed, which made me feel really sad and unmotivated. When you smoke, you're fine with just being. But because I didn't have anything going on in my life, I felt like it consumed me rather than the opposite. I just want to know that I have my sh*t together, and then I can just do it to relax or have fun, not [smoke] like ten joints a day.

Would you say you're the poster girl for weed?

Not in this moment, but I think people would be surprised like, "What the f*ck? It's all she does." Literally, that's why we wrote the song — because Justin [Tranter] and Julia [Michaels] were like, "How are you even awake?" You don't think about that when you see Zara Larsson. It was just a fun thing to write about, 'cause it sounds like a love song, which it ultimately is. At that point when we wrote it, [my use] was pretty heavy for sure. I can be a poster girl for a whole bunch of things, and I think it's fun when it's something unexpected like that.

Whose poster was on your wall growing up?

Beyoncé, Green Day, and Christina Aguilera. But then I would rip out [pictures of] random people [from magazines] just because the more posters you had on your wall, the cooler you were. But Beyoncé took up the biggest space. I had the real merch, the one you gotta pay money for, so she was special.

What was the first CD that you bought?

The first CD that I bought was of a Swedish girl called Carola, who I did a song with last year. It felt like a full-circle moment 'cause she was my biggest idol growing up. Then I remember buying the double CD of Whitney Houston’s greatest hits and Christina Aguilera's Back to Basics. I think I bought them at the same time, and they just changed my life.

What’s the song you’re most proud of?

I'll say "Never Forget You" because it was the first song that I ever wrote [and released], and I was super nervous walking into the studio that day. It was me, Astronomyy, and MNEK, and it was Astronomyy's first session too, so we were two rookies. It took like two hours, and I walked out of there, and I was so happy and proud. I sent it to my manager, and I was like, "I think we did a smash." I didn't know if it was a smash for real or just because I was just so excited that I had written a song, but then it was a smash. Maybe it was a fluke, maybe we had a really good day, but that song will always be really special.

On Fleetwood Mac & Performing At Her Own Wedding

Funny enough, every time I hear a really beautiful song I'm like, "I have to remember this one because I have to play this at my wedding.” But now I can't come up with anything. I think I want "Everywhere" by Fleetwood Mac. I also don't want it to be something super generic. Maybe I'll ask some of my writer friends to write me a song.

Would you ever sing at your own wedding?

No, absolutely not, but I'll happily sing at my friends' weddings. I would very much like my husband to sing if it's my boyfriend that I'm with now. If he ever proposes... No, I'm kidding. I'm too young for that. But if we ever get married, I demand him to sing because he... I know he will do his best. Let's just put it that way.

What do you mean?

He has some trouble finding the key. But if he gets it, then it would be amazing. I would just be blown away. I feel like singing to someone is such a beautiful way of expressing yourself. I think it's even more beautiful, in a way, when it's not something that you regularly do. I think it's pure if you just do it from your heart.

Yeah, that's cute! But it also sounds like a test.

We sing with each other all the time! It's one of my favorite things to do. We just try to find the key together. We've been doing "I Will Always Love You" a lot. He's got a really good voice! It's just the key sometimes. [Laughs] I'm talking like he's actually gonna do it, but I would really like him to, just 'cause it's so cute. It would mean more to me if he sang than if I sang to him, 'cause that's just what I do. It's my literal job.

More like this
Even If She Tried, Beth Ditto Couldn’t Stay Away From Music
By Ivana Rihter
Ramin Djawadi Is Living Out His Dreams
By Rebecca Long
Everything To Know About Taylor Swift’s 10th Studio Album, 'Midnights'
By Grace Wehniainen and Jake Viswanath
Twitter Is Freaking Out Over Rihanna’s 2023 Super Bowl Halftime Show Announcement
By Stephanie Topacio Long
Get Even More From Bustle — Sign Up For The Newsletter