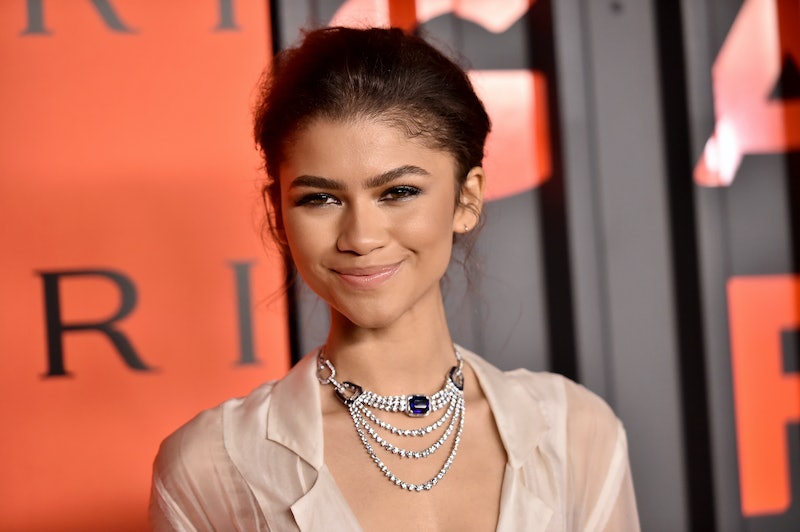 Finally, Zendaya's getting the recognition she deserves. On Monday, Nov. 30, The Euphoria star shared the trailer for Rue: Part 1, which is one of two bonus episodes airing on HBO and HBO Max this December. And while fans of the actor were certainly thrilled to see her return as her beloved character Rue in the preview, there's one particular moment that caught everyone's attention: The trailer referred to the actor as "Emmy Award Winner Zendaya."

Soon after fans noticed this tiny (but also huge) moment in the clip, they took to Twitter to share their excitement, causing both "Zendaya" and the phrase "Emmy Award" to trend on the platform. Zendaya won the Emmy for Best Lead Actress in September for her role in Euphoria, making history as the youngest person to ever take home the award in that category.

"The growth of Zendaya [has] been incredible to watch," one fan tweeted after watching the trailer. "It's now emmy award winner Zendaya. And don't y'all forget it. Proud of this woman." Hair Love filmmaker Matthew A. Cherry echoed that sentiment, tweeting, "Emmy Award Winner Zendaya." Longtime fans of the former Disney Channel star weighed in as well, taking to the social media platform with memes, keysmashes, and a whole lot of caps lock.

But wait, there's more. In addition to all of the celebratory tweets about that brief moment in the trailer, another fan pointed out that fans of the actor tweeted about it so many times that the term "Emmy Award" began trending as well. "EMMY AWARD IS TRENDING BECAUSE OF THIS ZENDAYA DID YOU EVER THINK YOU WOULD BE HERE," the fan exclaimed.

Although fans didn't expect Zendaya to be recognized in this way, they were expecting more information about the "bridge episodes," which the actor teased in an August interview on Jimmy Kimmel Live! While chatting with the host, she revealed that the episodes would "give everyone who loves the show a little something so we have something to live on until we are able to go into Season 2."

Euphoria was renewed for Season 2 in 2019, but the COVID-19 pandemic postponed filming. With these upcoming episodes in December, however, It's clear that the show's creators and Zendaya — fresh off that Emmy win — are eager to give fans more Euphoria as safely and efficiently as possible.