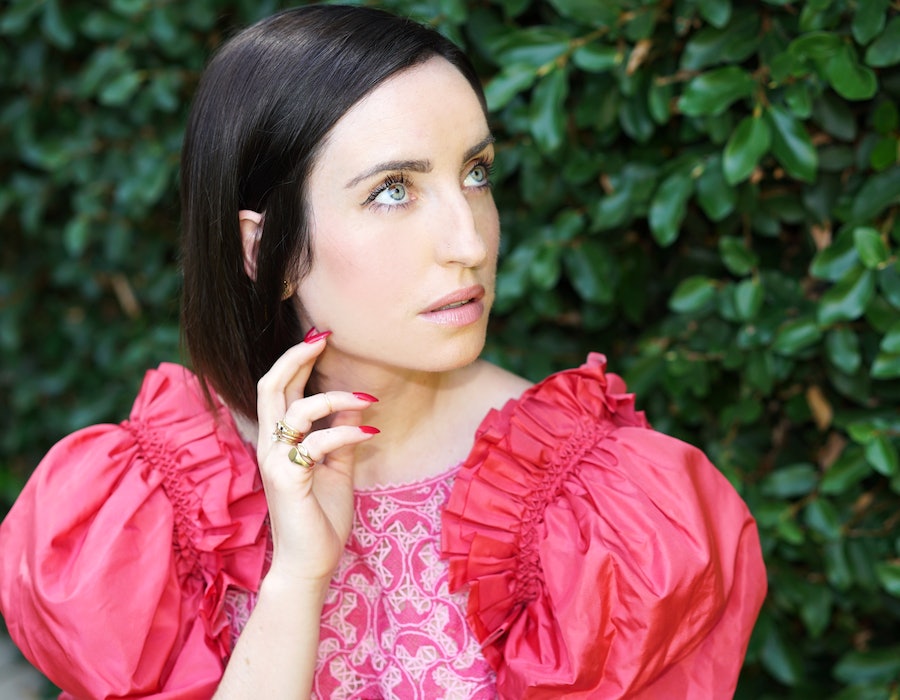 When Zoe Lister-Jones was in seventh grade, she decided to shave her head. "[Afterward] I was very masculine-presenting and was misgendered a lot and bullied,” she tells Bustle of her childhood in Brooklyn, where she was raised by a single mom. Middle school was a difficult time for Lister-Jones, but there was one thing she took solace in: the 1996 teen witch movie The Craft. "It was such an exciting moment for those of us who felt othered or like outsiders to be represented in popular culture and to be given agency," she says of discovering the film as a tween. Almost 25 years later, that self-described childhood weirdo (as in "we are the weirdos, mister") has written and directed a continuation of the film, The Craft: Legacy. While the new reimagining pays tribute to the cult classic, in Lister-Jones’ hands The Craft is a much more intersectional story — one that truly celebrates the power of its heroines.

Lister-Jones first got her start in Hollywood as an actor, starring in shows like New Girl and Life in Pieces. But as the daughter of a feminist artist — her mother is filmmaker Ardele Lister — it didn't take long for Lister-Jones to follow in her mother's footsteps. She made her directorial debut with Band Aid in 2017, notably working with an all-female crew on the film. ("I was taught by mom to look at the media in terms of the representation of women," she explains of the choice.) While she wasn’t able to repeat the experience for The Craft: Legacy, she brought the same feminist spirit to the set, hiring many of her Band Aid colleagues as well as three female occult specialists to consult on the protagonists' experience with witchcraft.

"I wanted to make sure that I was being really authentic to the witchcraft community and respectful of the traditions," Lister-Jones says. Accuracy was important, but so was preserving the empowering ethos of the original film. "What I wanted to honor from the original was young women stepping into their powers and the excitement of finding a community of like-minded women at an age when it's really easy to feel isolated."

Just as the original The Craft starred then-newcomers Fairuza Balk, Neve Campbell, Rachel True, and Robin Tunney as a group of outcast high schoolers learning to wield their powers, Legacy also features an exciting crop of up-and-comers as the film’s witches. And this time, the group is much more diverse. In addition to white characters Lily (Cailee Spaeny) and Frankie (Gideon Adlon) there's Tabby (Lovie Simone) a Black teen whose family has a history of witchcraft, and Lourdes (Zoey Luna) a Latina trans woman who's the most grounded of the group. “I wanted to portray the experience of young women [and] it was essential for me to include trans women in that narrative," Lister-Jones says of writing Lourdes into the script and working with GLAAD to find the perfect actor to play her. "Any brand of feminism that excludes trans voices is not feminism."

Lister-Jones also made it a point to reimagine the coven's friendship dynamics. In the 1996 version, Balk's character becomes power-hungry on dark magic while Tunney tries to rein the group in. Ultimately, they end up turning against one another and breaking up the group. Lister-Jones felt it was essential for her teens to maintain their bond. "[I wanted the] young women supporting each other and holding each other up, not turning against each other," she says.

"[The Craft] was such an exciting moment for those of us who felt othered or like outsiders to be represented in popular culture and to be given agency."

Without that internal divide, Lister-Jones was left to devise a new challenge to their sisterhood. In the end, she landed on one of the biggest threats to women everywhere: the patriarchy. Throughout the movie, the four teen witches harness their powers against the jocks who mock consent in their sex education class, and Lily's stepfather, a masculinity expert. Still, Lister-Jones was careful not to treat all masculinity in the film as toxic. There are also male characters who explore their femininity and refuse to buy into the idea that men and women need to live on a binary divide.

"What's so beautiful about the traditions of witchcraft are that they are about embodying the divine feminine and reconnecting with goddess worship," Lister-Jones says. "Including young men in that journey was important to me because [in] any social justice movement, intersectionality is key. There's a new generation of men that can not only be allies but could be embodying the tenets of feminism in a new way."

Because Lister-Jones was drawn to writing Legacy for her Craft-obsessed adolescent self, that time of her life came to serve as the backdrop for the film. "I was raised in a household that wasn't only [full of] feminine energy, but feminist energy. So anytime [my mom] had a new boyfriend, it was about how those energies were bumping up against each other," Lister-Jones says of her fascination with gender dynamics. "So I really wanted to explore that through the eyes of women coming of age." Or of a young coven, coming into their own.

More like this
Here’s Everything Coming To & Leaving Netflix In October
By Jake Viswanath
Everything To Know About The Long-Awaited ‘Community’ Movie
By Stephanie Topacio Long
How To Stream 'Bros'
By Morgan Leigh Davies
What’s New On Netflix: Ana De Armas’ 'Blonde' & A Nick Kroll Special
By Arya Roshanian
Get Even More From Bustle — Sign Up For The Newsletter