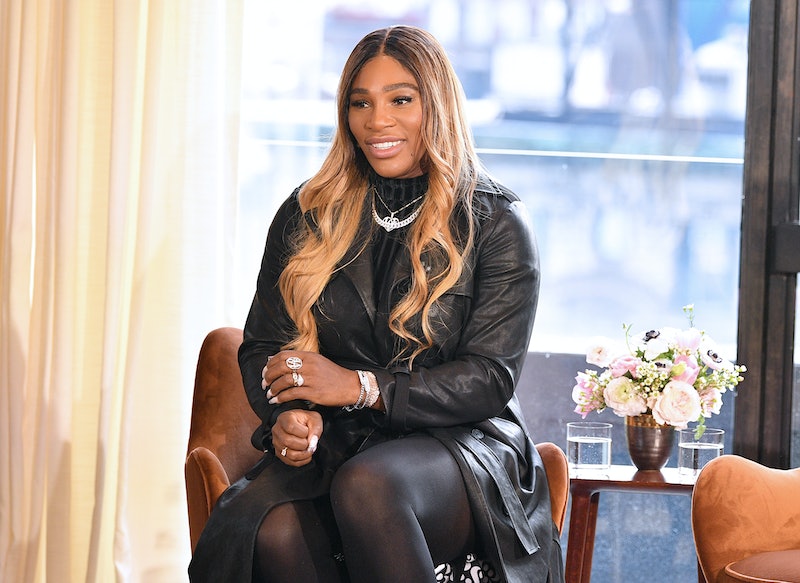 Serena Williams didn't want a traditional runway show format this season. Instead of making a quick appearance at the finale like most other designers, she decided to debut the S by Serena Spring 2020 collection after a fireside chat with Anna Wintour. Why? "I wanted to do this format so you guys can get to know a little bit more about the designer," she said.

Williams' design aspirations are no surprise to the fashion elite, including André Leon Talley, Elaine Welteroth, and Pyer Moss's Kerby Jean-Raymond, who gathered at Spring Studios to see her latest work on the last day of New York Fashion Week. The rest of the world, though, is just getting to know the sports legend as a designer and hearing about her path toward becoming one.

"I went to fashion school, I like to say, in between winning Wimbledons and US Opens," she says, laughing. "And it was fun. It was a lot of work and really hectic."

With that training, and a love of sewing born from watching her mother work with "old Vogue patterns laid out on the floor," Serena's transition into fashion feels natural to her — and she brings the same focus and tenacity she shows on the court into her designs.

Those designs range from gold lamé cutout gowns to black ruched midi dresses. A green button-down maxi feels so perfectly earmarked for her friend, Meghan Markle, that one can practically picture the duchess wearing it on vacation. (A previous Markle-inspired piece, the "Boss" blazer, sold out after she wore it.) Sleek suiting, two-tone gowns, and iridescent sequin catsuits round out the collection.

The season also marks Serena's foray into jewelry, which she created using conflict-free, ethically-mined diamonds (she extended this eco-conscious mindset to her clothing, where she used vegan leather). "We're killing our earth slowly and steadily," she tells Bustle. "We have to find a way, even if it's just a little way, to help."

Spring 2020 is inspired by Serena's travels, and specifically Africa, where she built schools in Uganda, Zimbabwe, and Kenya. "We definitely tapped a little bit into Africa with the giraffe print," she tells Bustle, recalling her time in Kenya. "It was one of my favorite places I've ever been." (At the presentation, close friend and fellow tennis legend Caroline Wozniacki modeled the two-piece set.) The full cast included 12 models of various shapes, heights, and sizes. “Sometimes it feels rare to see faces and shapes that reflect what we see in the mirror," Serena said. "It was important for me to showcase imagery specifically that makes women of all kinds feel seen and included.”

A lack of inclusivity, on and off the runway, is one of the biggest mistakes a designer can make, according to Serena, who dismisses the commonly-used excuse that it's difficult to produce plus sizes. "That's just a myth," she tells Bustle. "I'm not a small size, and because I'm muscular, it makes me even bigger, but I look good in clothes. Everyone can look good in clothes." Her inclusive mission is also a driving factor behind her firm Serena Ventures, which funds startups primarily by women and people of color.

Williams' advice for people looking to launch their own brands? "Although some things and some companies may pop overnight, that’s such a small percentage," she says. "It takes a lot of work — and nothing can replace hard work.”