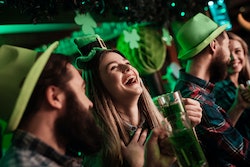 One March, I took a train into the city and found myself in the company of tons of people dressed in green for St. Patrick's Day. I checked my calendar to make sure that I didn't accidentally travel through time — I mean, it was only March 5 — and then realized that somewhere, somehow, a St. Patrick's Day event was taking place close to the city. It seems like the entire month of March is dedicated to emerald-shaded clothing, beer, and general merriment.

While I wanted to cheer the second these hooligans exited the train, I did realize that it was strange how I predicted their event based on one single factor — their green clothes. I looked down and realized that my own gray and blue sweater was a huge indication that I wasn't part of their crew. These kids took up more than one train car and had walked through the aisle of the moving train to greet people near and far who were also en route to the parade — obviously, they only approached others who were openly dressed for the occasion.

So, why do we wear green on St. Patrick's Day? It's one of my favorite colors, but how did it become tied to the patron saint of Ireland? Or even leprechauns?

It turns out there’s no one reason why green is the color of choice for the holiday. Rather, a handful of different reasons and lore combined and adapted over time resulting in St. Patrick’s Day being associated with the color green. According to National Geographic, the original color of the St. Patrick's Day was blue. However, as Nat Geo notes, green was adopted by St. Patrick’s Day festivities in the 18th century after the shamrock became Ireland’s national symbol. Additionally, green began to dominate based on Ireland’s nickname as "The Emerald Isle," which was popularized in part because of the country’s lush landscape, per USA Today.

There are also political ties to the color green. As Brian Witt, the cultural exhibits coordinator for the Milwaukee Irish Fest, told USA TODAY, green is associated with Irish nationalism. King George III introduced the Order of St. Patrick, named for the saint who was often depicted dressed in blue, per Smithsonian Magazine. After the divide between the Irish people and the British monarchy grew, the people of Ireland wanted to separate themselves from Britain and moved away from the color blue. Thus, the color green became a symbol of rebellion in Ireland, per Smithsonian Magazine.

The shamrock as a symbol of Ireland and St. Patrick’s Day also has a religious history. As National Geographic reports, some believe the shamrock represents the Holy Trinity — the three leaves symbolize the father, son, and the holy spirit. They were also used by St. Patrick to teach others about the basics regarding the Holy Trinity, per Nat Geo. Thus, it makes sense to represent the shamrock by wearing green, to pay tribute to the religious aspect, the seasonal aspect, and to the man himself.

Now, onto the leprechauns. There has been debate about whether leprechauns are offensive, specifically when thought of as a depiction of the Irish. To be clear, reducing a group of people down to a singular outfit or icon generally gets dicey. However, the leprechaun does have ties to Irish folklore. Per History, leprechauns are likely based on Celtic fairies, small creatures called “lobaircins” known for stirring magic and mischief. That eventually evolved into leprechauns pinching those who aren't wearing the color, per Nat Geo, which has developed into others pinching people to remind them that leprechauns wouldn't approve of their non-green apparel. As someone who hates being pinched, this is reason enough to throw on a green shirt. The latter is actually an American-based tradition, per Christian Science Monitor, as leprechauns were first imagined to have been wearing red jackets and red, pointed hats, both free of shamrocks.

It's amazing to see how much the holiday has evolved. Back in the day, only those in Ireland celebrated St. Patrick's Day, and it usually included a feast and a trip to church. Now, it's celebrated with green clothes, drunken debauchery, and immense pride of the country — after all, everyone is a little bit Irish on St. Patrick's Day. As you wear your green clothes and drink your green beer at your favorite bar this holiday, remember why green is such a powerful color — not only will it save you from getting pinched by a weird stranger, but it'll remind you of the rich history of Ireland.

More like this
19 Instagram Captions For Celebrating Black History Month
By Ayana Lage
8 Things You Can Do To Appreciate Lunar New Year
By Elizabeth Tsung
25 Inspiring Quotes From Black Women To Celebrate Black History Month
By Kyli Rodriguez-Cayro and JR Thorpe
24 History-Making Black Women You Probably Didn't Learn About In School
By Ayana Lage and JR Thorpe
Get Even More From Bustle — Sign Up For The Newsletter
From hair trends to relationship advice, our daily newsletter has everything you need to sound like a person who’s on TikTok, even if you aren’t.

This article was originally published on March 15, 2016