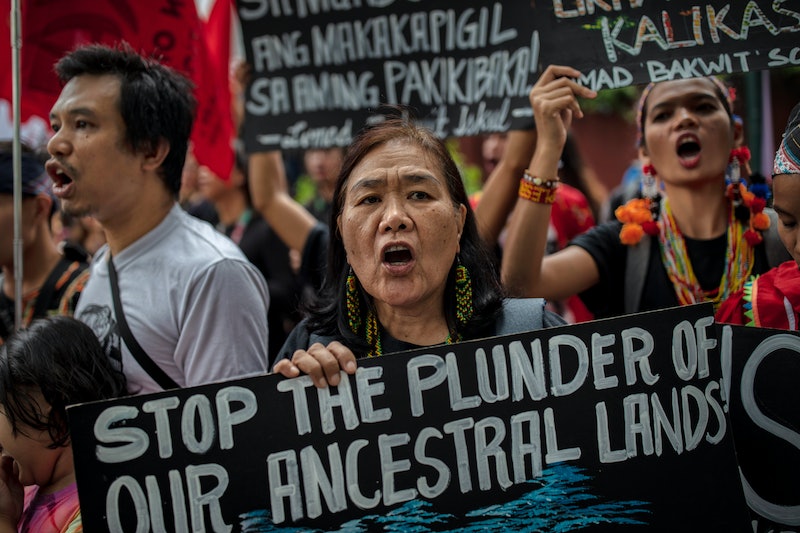 Columbus Day, which commemorates Christopher Columbus' arrival in the Americas, has been recognized as a federal holiday since the 1930s. But after Berkeley, California, renamed Columbus Day as Indigenous Peoples' Day in 1992, people have urged their cities and states to do the same. This year, if you'd like to celebrate Indigenous Peoples' Day by taking action, there are plenty of Indigenous rights organizations to support — today and through the rest of the year.

The history of Columbus Day is inextricably connected to the systematic extermination of Native American people by European settlers. This legacy continues to affect Indigenous people today. Native American women face one of the largest gender pay gaps of different ethnic groups, earning 60 cents for every dollar a white man earns on average, according to Equal Pay Today. As Deb Haaland, the secretary of the interior and one of the first Native American women elected to Congress, wrote on Native Women's Equal Pay Day in 2019,

The disparity in Native women’s pay wouldn’t be surprising if the general public knew about the other disparities that exist in Indian Country. Native populations suffer from chronic disease, poverty and education gaps at disproportionate rates.

Native communities are often left out of the equation and off the radar of mainstream media. It is part of the reason why the crisis of missing and murdered indigenous women has gone unaddressed for so long.

Taking history and these disparities into account, over 100 cities and a handful of states including New Mexico, Minnesota, Alaska, Vermont, and Oregon celebrate Indigenous Peoples' Day to honor Native American people and raise awareness. In 2021, Joe Biden became the first American president to formally acknowledge Indigenous People’s Day in a proclamation, writing, “For generations, Federal policies systematically sought to assimilate and displace Native people and eradicate Native cultures. Today, we recognize Indigenous peoples’ resilience and strength as well as the immeasurable positive impact that they have made on every aspect of American society.”

If you want to show where you stand on the second Monday in October, you can support the various organizations that are working to protect, support, and empower Native Americans and other Indigenous people across the world.

More like this
Chris Kaba's Family Continue Fight For Justice After Viewing Police Bodycam Footage
By Sophie McEvoy
Women Around The World Are Cutting Their Hair In Solidarity With Mahsa Amini
By Darshita Goyal
Constance Wu On Self-Doubt, Family Drama, & Her Sister's Unwavering Support
By Constance Wu
5 Ways To Help People Impacted By Hurricane Ian In Cuba & Florida
By Emma Carey
Get Even More From Bustle — Sign Up For The Newsletter

This article was originally published on Oct. 14, 2019