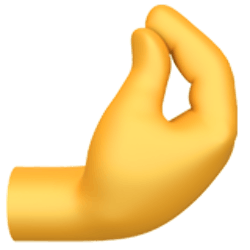 If a picture if worth a thousand words, then an emoji is worth at least 10,000, right? But with the sheer number of options to choose from... well, how is one supposed to know when to use them all? You already figured out when it's appropriate to use the smiling cat as opposed to the crying or laughing cat, as well as what each heart emoji means. And the same goes for the hand emojis.

While classics like the peace sign and wave may easily translate from IRL, the language of hand emojis is pretty expansive. And their interpretations even seems to come with their own dialect sometimes. (See: The Japanese folding hand emoji, which literally means gratitude, but is widely interpreted in other countries as praying or a high five.)

As the emoji library continues to expand with updates, including Apple’s March 2022 iOS 15.4 update, it’s always a good time to refresh your emoji fluency — and there’s no better place to start than hand emojis.

Here’s the meaning behind some of the most commonly used hands emojis.

Emojipedia says that the “Thumbs Up” emoji is meant to signal approval. Also known as the "yes" emoji, this emoji is used to express general contentment. Alternatively, it can be used sarcastically to mean something isn't actually good.

Unlike its more positive counterpart, the Thumbs Down emoji is almost never used sarcastically. Emojipedia states that it’s meant to indicate disapproval, much like when your group chat all thumbs down react to your suggestion to have a Pride & Prejudice movie night again.

It's like the Thumbs Up emoji, but more fun. Emojipedia says that the symbol can represent, “I’m OK” or “Yes, that’s correct / good,” which feels like a correct/good definition of how it’s typically used. It can also less frequently mean, "This is literally how much I care" (notice the space between the two fingers).

This one is most commonly referred to as the prayer or praise hands emoji. It is also known as the "high five" emoji, which sort of makes sense if you want to be like that. However, on Emojipedia, the emoji is described as “folded hands” and is said to symbolize please or thank you in Japanese culture.

Emojipedia describes this symbol as "Victory Hand," but notes that it’s most commonly seen as the peace sign. The peace sign emoji is a go-to emoji for saying goodbye or goodnight to people, but it can also be used to mean something like "just chilling” or “peace be with you.”

Emojipedia says that the flexed bicep emoji is used to mean “strength, or working out.” But it might be best used to top off a “Not to flex, but...” text. It can also be used slightly less traditionally to mean "nailed it."

Emojipedia says that using this symbol, especially multiple times in a row, can mean applause. But anything that actually deserves congratulations should be met with a thumbs up or a face of some kind, so you really only want to use the clapping hands to sarcastically indicate that someone's behavior is not deserving of real applause.

Emojipedia says that this is meant to represent the number one or to indicate a question, but it can also be used to show someone how much you want to turn up that night.

This emoji's formal title is "Fisted emoji," but please let's never say that again. Emojipedia says the oncoming emoji is used to represent punching someone, or fist-bumping them — which can be a pretty mixed signal.

Emojipedia says that this emoji is supposed to mean “stop” or to high-five someone. (Again, pretty mixed signals — but “stop” seems to be more common, FYI.) Of course, it can also be swapped as a sassy “Talk to the hand,” or, in the age of Zoom class, to signal that you have a question.

If you haven't seen Star Trek, this emoji is probably just a weird anomaly to you. But if you are Trekkie, or have checked its Emojipedia, you know this as the Spock emoji or the Vulcan Salute. The salute is essentially a greeting meaning, “Live long and prosper.”

You may have previously used the praying hands emoji for all of your emoji wishing. But, now, with the fingers crossed emoji, you can manifest with one tap of your keyboard. Emojipedia said this is meant to wish someone luck or show that you’re hoping for a certain outcome.

Emojipedia says that this can be used as a cordial greeting, but it’s also often used to signal you’ve made a deal or found a comrade in someone. This “Pleasure doing business with you” emoji is the perfect balance of business and casual.

Whether you’re a Swiftie who remembers Taylor throwing this signal with “13” drawn on her hand at concerts, or are loving the TikTok renaissance of the heart hands, this is the perfect cutesy way to send someone a little extra love. Emojipedia says this is used to express “love and support,” which feels very accurate.

These are two separate emojis, but, odds are, you’re mostly going to be using these two together when you’re ready to initiate full simp mode. Emojipedia doesn’t indicate a deeper meaning to these to symbols other than “index finger pointing to the right/left,” but don’t oversimplify the simping.

Emojipedia describes this as the “call me” hand, which makes sense. But it seems that you’ll more often see this used as a shaka “hang loose” sign. Throw this one up when you’re trying to keep things chill in the group chat. But beware if you’re not prepared for an unsolicited FaceTime call from someone misinterpreting the gesture.

Often used to jokingly say, “Take notes,” or to signal that you’re taking notes. Emojipedia describes this as a symbol that is “used broadly to represent writing,” and “also used between words to show that a lesson is being learned and to indicate someone is taking notes.” (i.e., “Use✍️writing✍️emoji✍️jokingly. Got it.”)

The two raised hands depicted in the above emoji are used to celebrate. Your friends finally come up with a plan for the night? Shoot the raised hands emoji their way.

This gesture can be interpreted as money, as in two fingers rubbing together, or love, as in the finger hearts K-Pop stans throw up.

20. Index Pointing At The Viewer

This new emoji is used to indicate an emphatic “you,” as in a text you might send your roommate — “No, YOU have to take out the trash tomorrow.”

This emoji may look like a variant of “Rock On,” but it’s actually American Sign Language for “I love you.” (The three fingers, combined, spell I-L-Y.)

Well, you know what this one means.

This emoji, also called “Nonchalant,” is the visual embodiment of Elle Woods saying, “What, like it’s hard?” in Legally Blonde, or Lizzo feeling fussy in her “Balenciussies.” Use it when you want to show off that your latest flex was NBD.

This emoji, per Emojipedia, can be used “to represent the action of lifting, offering, demanding, or beckoning,” or to signal that you’re questioning. Another context might be opening your hands to the universe, as in a meditation practice. (See also palm down hand, which might suggest dropping something or ground your hands down.)

This emoji represents the Italian gesture ma che vuoi, per Emojipedia, which is loosely translated as meaning “What do you want?” Colloquially, you might also use this to signal that something is, mwah, chef’s kiss.

This emoji is great to signal that you just want a little bit to drink at the bar tonight, or, per Emojipedia, to indicate that something is small. Ahem.

This article was originally published on July 3, 2015