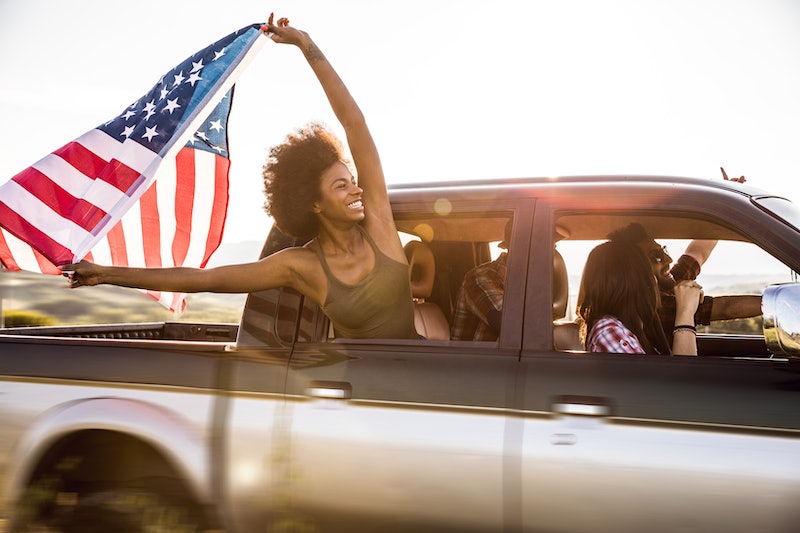 The Fourth of July is a day set aside for us to reflect upon America's birth and history. But let's not take ourselves too seriously! America loves to laugh, and these funny Fourth of July quotes will remind you that our nation is many things, including pretty freaking hilarious.

See, way back in the day when our Founding Fathers were brainstorming all the ways to make our nation, they came up with this little thing called "freedom of speech" (nice one, guys!). It's basically where you, as an American, have the right to say whatever is on your mind without fear of censorship... and as such, people have had some amazing and spectacular things to say. From Groucho Marx and George Carlin to Louis C.K. and Stephen Colbert, Americans tend to have a great sense of humor when it comes to talking about, well, America. Heck, even Ronald Reagan was able to crack a few smiles.

So this year, make sure you are using the Fourth of July weekend to have a good time, because America thrives on fun, and these quotes about America are as fun as they get.

3. "If our Founding Fathers wanted us to care about the rest of the world, they wouldn’t have declared their independence from it." — Stephen Colbert

4. "All great change in America begins at the dinner table." — Ronald Reagan

5. "All people are born alike. Except Republicans and Democrats." — Groucho Marx

6. "My father described this tall lady who stands in the middle of the New York harbour, holding high a torch to welcome people seeking freedom in America. I instantly fell in love." — Yakov Smirnoff

7. “It’s Fourth of July weekend, or, as I call it, Exploding Christmas.” — Stephen Colbert

8. "I always have the most fun on the Fourth of July. You don't have to exchange any gifts. You just go to the beach and watch fireworks." — James Lafferty

9. “You wonder sometimes how our government puts on its pants in the morning.” — Jon Stewart

10. “‘And one day people will celebrate this day by getting shit-faced and lighting Chinese explosives on — Thomas Jefferson 1776.” — Zach Braff

14. "I normally don't have a burger, a brat, and a steak but... it's 4th of July. And I need the energy if I'm gonna start blowing crap up. It's what the founding fathers would want." —Jim Gaffigan

17. “Happy Fourth of July! Remember: If you drink a fifth on the fourth, you may not go forth on the fifth!” — Unknown

19. “May your 4th of July Fireworks cause less personal injury than your alcohol consumption.” —Unknown

20. “Isn’t it funny how red, white, and blue represent freedom... until they’re flashing behind you.” — Unknown

More like this
Here’s What TikTok's "Mascara” Trend Is *Really* About
By El Hunt
Ashamed Of Your Screen Time Stats? Here's How To Change That
By Alexis Morillo
Learning To Love, Not Judge, The Lunchbox Wives Of TikTok
By Esther Zuckerman
How To Turn Off TikTok Profile Views So You Can Stalk Other Accounts In Secret
By Alexis Morillo
Get Even More From Bustle — Sign Up For The Newsletter
From hair trends to relationship advice, our daily newsletter has everything you need to sound like a person who’s on TikTok, even if you aren’t.

This article was originally published on July 3, 2015