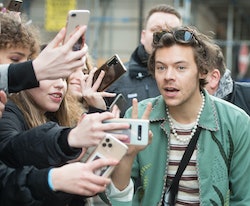 Perhaps your timeline has been telling that you have “no choice but to stan” Phoebe Bridgers and Paul Mescal’s blossoming romance. Or your recent viral tweet received a reply with a fancam video telling you to “Stan Ariana Grande for clear skin.” No, this isn’t the newest skincare hack, nor a nickname for Stanley, nor are you required to stan anyone. But, if you try to keep up on your internet lingo, then you really do have to stan understanding what “stan” means.

While it’s often believed that “stan” is simply a portmanteau of “stalker” and “fan,” any true “Stan” stan would tell you that its etymology is a bit more nuanced. Here’s everything you need to know about the slang term and how its use has evolved over the years.

Where Does "Stan" Come From?

It all starts with rapper Eminem. As proven by his world record for using the largest number of unique words out of any recording artist (including multiple words that he’s successfully rhymed with “orange”), he has a pretty extensive vocabulary. And that includes some words that the artist has incidentally coined himself — including “stan.”

In 2000, the rapper released "Stan" as the third single off his award-winning album The Marshall Mathers LP. Sampling Dido’s “Thank You” in its chorus, the song is something of reverse-fan-fiction — as Eminem weaves a twisted narrative about an imagined fan named Stan who kills his pregnant girlfriend and then himself after Eminem refuses to answer his letters. As for the choice of Stan’s name, it’s never been confirmed that Eminem meant for “Stan” to break out into “stalker” and “fan.”

“Eminem shared scans of the two notebook pages he wrote the song on in his 2008 autobiography, The Way I Am,” notes Thomas Hills, one of the top contributors for Genius’s analysis of the lyrics of “Stan,” “but there is no confirmation in his scrawling handwriting that the term is a portmanteau.”

Complex reporter Shawn Setaro, who is also a top contributor on the “Stan” Genius analysis, guesses that the name might have been chosen for the fact that it rhymes with “fan.” However, Setaro notes that it’s not uncommon for things to be retroactively assigned meaning in hip-hop and rap — look at Wu-Tang’s “backronym” of “Witty Unpredictable Talent And Natural Game” as an example. In the case of “Stan,” Setaro notes that the after-the-fact meaning was decided “not by the artist, but rather by listeners.” Yes, that’s right. Part of the meaning of stan may have been decided by stans, for stans.

As for the term’s transition from Eminem’s eery lyrical narrative to pop culture lingo, Setaro says that fellow rapper Nas might have kicked off the paradigm shift when he used the term to insult Jay-Z in his 2001 diss track, “Ether.” Since then, the term has progressively spread across pop culture, so much so that, in 2017, stan was officially defined as “an overzealous or obsessive fan” in the Oxford Dictionary.

In typical Internet-age form, "stan" has gone through so many iterations and usages that it no longer holds the connotation of an abusive, letter-writing stalker. So that's good. Depending on who you're talking to, though, "stan" can have a multitude of different connotations.

“While the original meaning based on Eminem's song and the way the name coincidentally works as a combination of ‘stalker’ and ‘fan’ is extremely harsh, many people we would think of today as ‘stans’ are just super devoted to their favorite artist or celebrity and particularly vocal about it on social media,” says Arianna Jeret, deputy editor at Your Tango, who also wrote a deep dive into the usage of “stan.”

Hills says that “stan” is usually used in a positive tone, but he notes that being referred to as a stan can also be “leveraged as a term to diminish people's views or discredit their objectivity.” However, the term seems to be more often used by those self-identifying as stans. “I hear it far more frequently in a self-mocking or positive light than as an insult,” says Setaro.

What Is Stan Twitter/Stan Culture?

As die-hard fans of various celebrities have come to self-identify as stans, many stans have found like-minded communities online — especially on Twitter. Some stans have gone so far as to have their entire page dedicated as a fan account to their faves. Stan communities can unite to promote their favorite artists’ content, share content surrounding the artist, and bond over shared passions.

“Scientifically speaking, having a sense of belonging and community is fundamental to our humanity,” says Hills about stan communities, “Therefore, logically speaking, fandom provides a wonderful opportunity for us to find these things.”

However, as is implied in the difference between being a “fan” and being a “stan,” there is a degree of heightened devotion that makes stan culture a bit more extreme.

“‘Stan’ communities can often become echo chambers of fanatical fans that aren’t able to leverage objectivity due to groupthink,” explains Hills. “Contrary voices can become buried in spam and abuse, and it can disempower its own members out of fear of becoming vilified by their own.”

Likewise, Setaro notes that there have been instances in which a fanbase “comes together to attack someone for sharing criticism — or sometimes just unpleasant facts — about their celebrity of choice.”

That said, the heart of Stan culture comes from a place of positivity — both in praising “stanned” artists, and creating a community where fans can find and bond with like-minded individuals.

The foremost reason seems to be that stan has stayed tucked away inside specific fandoms, like K-Pop circles, for years; it's only now beginning to see the light of day. As social media platforms increasingly cross-pollinate, niche slang words like these are blowing up left and right.

As Jeret notes, “Eminem's ‘Stan’ was released in 2000, and everything 2000s has been slowly building to trend over the last few years. The term provides the perfect blend of nostalgia for Gen X/Millennials and novelty for their Gen Z kids.” Think of the recent resurgence of wired earbuds or 2014 Tumblr aesthetics, for example.

Jessie J's grateful reference to her stans in 2012, during which she credited them with her commercial success and dubbed them "Heartbeats," may have been the slow-burn catalyst that "stan" needed. Granted, soon after the issuing of this verbal thank you note, one of her stans broke their own leg to mimic Jessie J's injury and sent her pictures... but not all stans go to those sorts of extremes. Promise.

How Can The Term “Stan” Be Used?

As “stan” has grown in popularity, the term has been used for different purposes and effects — whether to describe unique facets of fandom or used ironically.

Stan can be used as a noun, like saying that you are a Rihanna stan. Or, you can use it as a verb, by saying that you stan someone, or stan for them. You might see the phrase used with the royal “we,” as in, “We stan a short king.” The implication isn’t that everyone in the world actually stans that thing, but rather, “anyone with taste stans this.” You can stan in a serious way or ironically — or even somewhere in between. Maybe you stan your humidifier just as hard as you stan Succession. And that? Is valid.

So, there you have it. The history of stan, from 2000 to today. With endless uses and a surprising backstory, we have no choice but to stan this popular phrase.

More like this
Ashamed Of Your Screen Time Stats? Here's How To Change That
By Alexis Morillo
Learning To Love, Not Judge, The Lunchbox Wives Of TikTok
By Esther Zuckerman
How To Turn Off TikTok Profile Views So You Can Stalk Other Accounts In Secret
By Alexis Morillo
I Spent 2 Years Trying TikTok’s Dating Advice
By Kailynn Johnson
Get Even More From Bustle — Sign Up For The Newsletter
From hair trends to relationship advice, our daily newsletter has everything you need to sound like a person who’s on TikTok, even if you aren’t.

This article was originally published on July 11, 2015