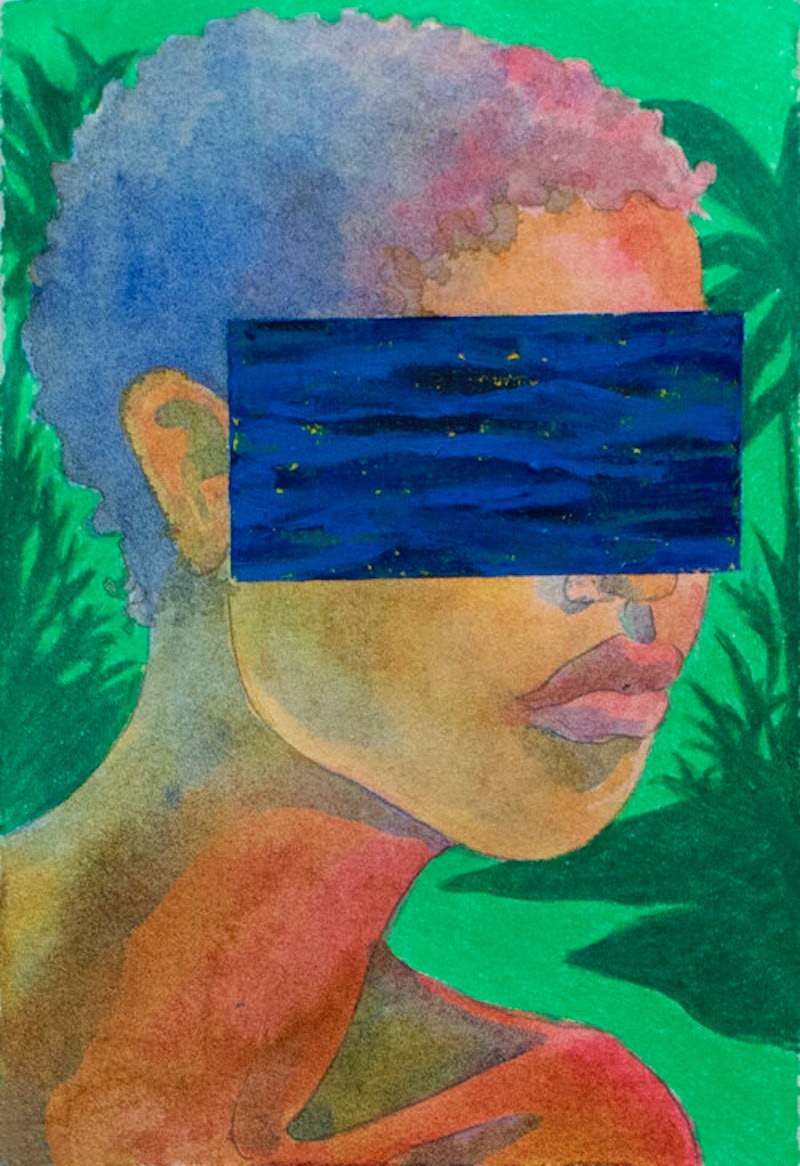 Artist Adrienne Elise Tarver had been interested in tarot for years, but she never really saw how the practice could fit into her artwork. But all that changed in mid-2020 amid Black Lives Matters protests and the ongoing pandemic. “It was like this veil between these things that we didn't talk about before [was lifted],” says Tarver of the summer of 2020. “Our real-life became so thin and permeable, that this idea of talking about spirituality, the future, and terror, felt much more serious. It felt like a necessary investigation for myself, and a necessary conversation for me to have.” Soon after, Manifesting Paradise — a hopeful, tarot-inspired project that looks to the future — was born.

Going through the tarot deck, Tarver began to see how each card’s meaning was reflected in her own life. “It's less about trying to predict the future, and it's more about trying to understand how you're... generalizing the present and how that might affect your future,” the Brooklyn-based artist tells Bustle.

The artwork is currently on display at an exhibition in the Academy Art Museum in Easton, Maryland until July 24. But Tarver’s not done with tarot just yet. “I'm going to keep going until I complete all 78 cards,” Tarver says. “There will be a full deck.” Below, Tarver shares three pieces from the project that hold special meaning.

This was one of the earliest ones. I felt like, oh this is good, this is going somewhere, this is the piece I want to put out into the world. Its number in the deck is two, but it's actually the third card because the first card is zero. The High Priestess is this figure, a traditionally feminine figure, that has a high sense of intuition and doesn't need to see things to know things. When I was starting to commit to making this series at the beginning of the pandemic, it felt like I was listening to all this information and couldn't really see what the future held, but I felt deeply that I wanted to know the things were going to be OK. I think [High Priestess] really embodied that feeling for me.

When people see High Priestess, I hope that there's a sense of calm. There's water over her eyes, and hearing people's interpretation of it is pretty spot on. There's this understanding that she's not blind, somehow she's still knowledgeable. I wouldn't say she’s all-knowing necessarily, but she's still knowledgeable. She's still in touch, even without her sight. It's kind of like the cliche, don't believe everything you see.

The Strength card has a special meaning to me because the imagery actually comes from a painting I made right out of undergrad. It’s this very big painting in my parents' house of this woman who's riding an elephant's trunk. She's not on the top of the elephant, but on its trunk and they're kind of walking together. Traditionally in tarot, the Strength card has a woman who's taming a lion or holding a lion's mouth.

But I love elephants — I think they're incredible animals. They're super intelligent and emotional. They run like matriarchal groups. There's this whole female-centered system that's natural to how they structure themselves. But they're also super intimidating because they're huge, they're heavy, and they can destroy things. So there's this gentle strength because they’re actually very sensitive animals, along with their physical presence.

Because of this fascination with them when I was younger, I made this painting. I recognized how it suited the card and this idea of strength so well. The interpretation of Strength, for me, is not about physical strength. It's about sustaining strength over a period. It's about the intelligence, the emotional intelligence, that’s needed to persevere in life.

Tower is notoriously a difficult card, and nobody wants it to come up in their reading. I've never seen a tarot reader be able to give it a great spin. It's about destruction and necessary upheaval, and usually, it’s one that’s a surprise. Traditionally, its [symbol] is a medieval tower that's struck by lightning. The tower's on fire, and people are jumping out of it. I was really struggling to figure out how to interpret it for myself. You don't really want to think about the possibility of surprise destruction in your own life.

At the time, I was living in Atlanta and I was doing research on my own family history connected to the city. I had found images of the former Tarver Plantation that still stands. The history of this country didn't really allow for documenting Black people, but there's the possibility our family was connected. There were all these real estate images of it from the ‘90s that I printed out and had in my studio. This was the same time as protests were happening during the pandemic. So, we're talking about justice for violence against Black people in this space that has such a history of incredible violence — the soil itself is filled with bodies. Understanding what that meant there felt palpable.

Because I have this family history, I started to recognize that the necessary upheaval and destruction was this plantation house. It was this recognition of where it personally resonated with me, and also this understanding of how to find the silver lining of this card. I see how it can be maybe not positive but necessary.

Working on this felt a little cathartic. But also, I was kind of scared. It sounds silly because I wasn't actually burning down a house. It was just in concept. But I think this system is so ingrained in who we are as a country. And these plantations, which are everywhere in the south, they're kind of revered — people have weddings and parties there. They’ve been repurposed and their narrative has changed. They’ve kind of gotten a PR bump.

I lived in Georgia for seven years as a kid. These landscapes and things like plantation houses are ingrained in my memory in a positive way. I see the beauty of these places, so it's complicated in my memory. It almost felt like a betrayal [to make]. But part of me had to recognize that I had to let go of feeling bad about it because it's necessary. This is actually the thing that's destructive — and destroying it is what allows you to move on.