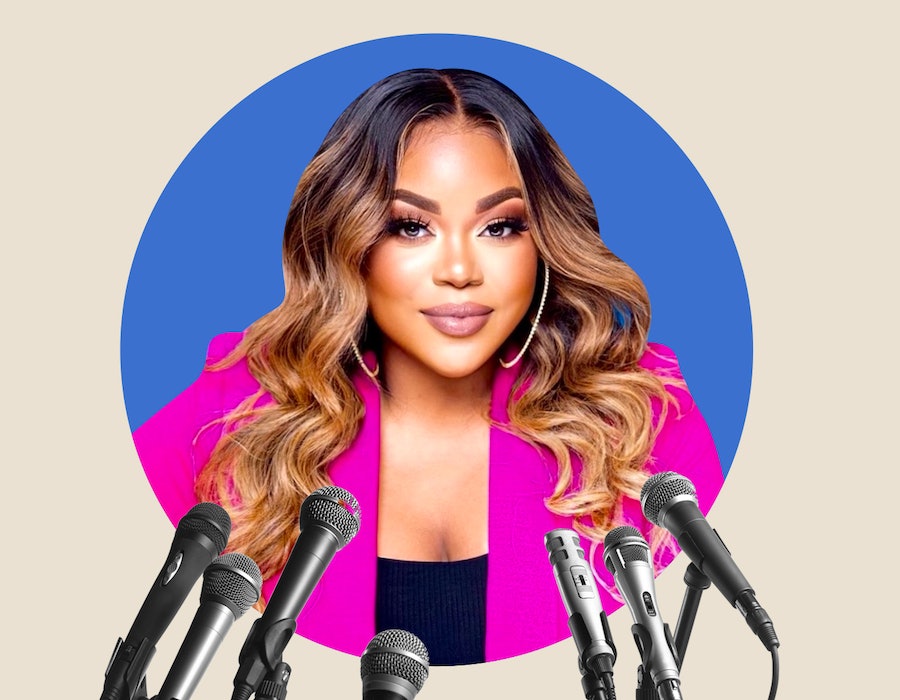 Since its launch in 2014, The Shade Room has become the No. 1 destination for all things Black culture, celebrity gossip, and entertainment news. Angelica “Angie” Nwandu, its founder, says the popular site began as a side hustle after she was unable to land a job, failed the GMAT and LSAT, and was in need of money. “It really was just like an experiment,” she says. “I had no idea it would become this.”

The publication now has a cult-like following with more than 27 million followers on Instagram and 663,900 on Twitter, and a teen vertical with a separate Instagram that boasts 4.5 million followers. TSR outranks media giants like E! News as the top social, Instagram, and media publishing brand, according to Comscore, a leading media measurement company.

Nwandu credits the publication’s meteoric climb to its dedicated base, whom she calls “roommates.” That term came from one of her earliest loyalists — “I think she was follower No. 5,” the Los Angeles native recalls — because the visitors “live” in TSR with their round-the-clock engagement. They also often direct the day’s coverage with the tips and scoops they submit. She also points to her staff of 31, including nine writers, for the site’s growth because they maintain the authenticity TSR has come to represent, unabashedly centering Black culture.

But most prominently, she says, because TSR was the first to disrupt the industry by blogging on social media, there was an untapped market ripe for the taking. “People wanted to look at their friends’ pictures and get the news in their feed at the same time,” the 32-year-old says of the gap she noticed. “I wanted that too. I wanted 24-hour news [and] I wanted it on social media… I wanted everything short and digestible [with] picture first content.”

The site’s name is a spin-off of the slang throwing shade — sharing brutal honesty about someone or on a particular subject. Nwandu said through TSR she wanted to redefine what it meant to speak so frankly because she was tired of seeing “truth misconstrued as ‘shade.’” She’s now preparing to add her love of scriptwriting back to her day-to-day with her second film, Juju. (In 2018, she co-wrote the award-winning film Night Comes On, starring Dominique Fishback.)

Here, Nwandu talks about running TSR full time, how she plans to expand the publication, and what it’s been like balancing that while working on her latest film with Universal Pictures, Issa Rae, and La La Anthony.

Many people have seen and heard of all your accomplishments, but what has the journey to The Shade Room really been like?

As a kid, I started building resilience — encountering difficult situations and keeping one foot in front of the other. When I was 6, I was placed in foster care after my father, who is currently in prison, killed my mom. The process was very traumatic: picking up my life and going to a new stranger’s home time and again. I ended up experiencing a lot of physical and sexual abuse — it was a tough time. It took me a long time to be proud of my story. To say, “Look, this ain’t my fault. This is not embarrassing,” and to walk in victory.

I was in foster care until I was 18, then I went to Loyola Marymount University. And the struggles didn’t end there. I graduated with a 2.8 GPA, was unemployed, and bombed all graduate school standardized exams. I was in a place where I had nothing. I even got denied from working at Pinkberry. And I failed at my first business venture, Juju’s Closet, an online boutique shop. I had nothing left. The idea for The Shade Room came out of me just being interested in media and needing to do something with my time while my friends were in law school, and it just ended up working in my favor.

What inspired your journey into filmmaking?

Writing was my first love. I was trying to break into filmmaking right before The Shade Room took off. I ended up writing Nights Comes On with Ozark’s Jordana Spiro. That story, like my upcoming film Juju, came from me thinking about my life, especially from my time navigating the foster care system. The movie did well. It went to Sundance, got bought by Samuel Goldwyn Films, and won nine awards, including Sundance’s Next Innovator prize.

“Effective leadership is not about deadlines and rules. It’s about inspiring people with how you live your life.”

Speaking of Juju, what is it about, and when can we expect to see it?

It’s a YA Black film that explores New Orleans witchcraft culture and examines the negative sides of trying to manipulate reality. It centers on outcast high school students who are about to enter their senior year, desperate to end with a bang. So they enlist another student with a deep history of witchcraft to help them cheat the code and get everything they want. They’re met with consequences along the way. As the age-old story goes, what you want isn’t what you need.

The idea came from my much-hated high school experience. I was bullied for my weight, and I remember it was so bad I couldn’t wait until my senior year to leave and graduated early. I always wondered, if there was some magical way I could have had influence in high school, would I have taken it?

The project is still in development at Universal Pictures; we don’t have a release date yet.

How do you balance working on Juju’s script and running your digital publication full time?

Writing the script has been the most challenging. But I’ve received support from Issa Rae — who is always looking for ways to lift other Black writers — and Universal. Recently, the project team added another writer to rework the script, which helped. But it also humbled and challenged me because I had felt a bit of impostor syndrome, thinking, “Am I ready for this?” So, having the support of the film project’s team and my Shade Room staff has allowed for more balance.

How do you manage your daily responsibilities, like preparing for meetings, when navigating that balance between script writing and running your TSR team? What’s the key ingredient?

Delegation is the most important thing. Depending on where you are in your business financially, get an assistant or two to help you organize your schedule. Then, you have to show up. When you lead a company, it’s so easy to back out. But your team needs you to be present even if you’re not feeling inspired. In those moments, what helps most is to be prepared beforehand: have an agenda set with the specific topics you’d cover — this makes the meeting purposeful.

In terms of characteristics needed to be efficient at those things, intentional self-development has served me well. Effective leadership is not about deadlines and rules. It’s about inspiring people with how you live your life. To get to a place where people want to be led by you. And that comes from being transparent with your team. Like right now, with inflation, I’ve been candid with staff about any company struggles like advertisements not being what they once were. So, I get real about my fears and doubts. And my team tells me they respect that level of transparency. It builds trust.

What’s in your soul/self-care toolkit, and what have been the best ways you’ve prioritized wellness?

When you run a company, you don’t get weekends or holidays off like everybody else, and The Shade Room is 365. There were years when I didn’t take a vacation. But as time moved on, I began listening to my body more. Today, if I feel overwhelmed and can’t take it, I call my assistant and say I need two weeks off the books without explanation. (And I do recognize that this is a privilege.) During that time, I typically travel and do nothing. Decompressing is so important. If you don’t care for yourself, how can you show up for anyone else? You shouldn’t wait until you’re empty because once you’re empty, that’s when you burn out. And once you’re burned out, you lose your passion. Once you lose your passion, what kind of business are you building?

In 2023, I plan to adjust my wellness strategy and get intentional about changing my environment and focusing more on myself. I’m going to take a weekend off every month and go somewhere new. It could be a road trip an hour away or across the country.

You’ve done so much with TSR, from doubling your revenue every year since you launched, introducing new verticals, upping your advertisers to helping register 180,000 Black voters during the last election, and encouraging the community to get vaccinated against COVID. What can we expect from TSR in the future?

A lot of programming content. We’re going hard on YouTube now. Our first interview show got 2 million views. We’re also developing more verticals, perhaps fashion and food. We’ve been getting more into political coverage and investigative reporting. It’s my dream that The Shade Room would have the same access as Fox News or CNN when things happen in our culture. I feel like our stories are monopolized by big media companies, and none of them are Black owned. I want to be on the front lines and in the courtrooms, which we have already started to break ground on.

What would you tell someone thinking about breaking into your industry or self-starting?

Figure out what your need is and what you feel is missing from the media. It can begin with you thinking about what voice(s) you feel is not currently represented and tap into that. Once you do that, you will attract an audience who also feels the same and become a disruptor in your own right — and disruptors always get the first fruit.

When you’re doing something that the market doesn’t have, it can be scary. But the best way to be different is to find out what you want from the industry, have faith, and believe that other people want that same thing. For The Shade Room, the idea all started because of what I wanted from social media. At the time, nobody was blogging on Instagram because they saw no need for that, and they were wrong.

What advice would you give your younger self?

Don’t spend too much time worrying about the future. I spent so many years stressed, depressed, and worried about what life would look like down the road that I missed out on enjoying those years.

Even now, that’d be the advice I’ll give myself. I still spend an ungodly amount of time worrying about the next 10 years. Like, what’s the business going to look like? Will I fail? Because I have some perspective now, I challenge myself and say, “Wait a minute, remember how much time you spent worrying about now? Look at how it looks now.” I try not to be scared of the unknown anymore; I’ve seen how the unknown worked out in my favor. So I keep reminding myself of that — that I only got this one life on Earth, and I don’t want to look back and say, “Damn, I spent my whole life worrying and worrying and worrying.”