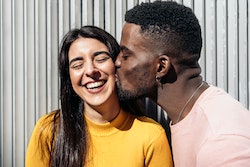 As two of the most ambitious and goal-oriented signs in the zodiac, Aries and Capricorn have what it takes to be the zodiac’s ultimate power couple. But when both partners are equally stubborn, competitive, and reluctant to back down from a fight, there’s bound to be trouble in paradise from time to time. Aries and Capricorn’s compatibility has everything you need to know about this fire and earth pair.

“An Aries-Capricorn relationship is quite literally the union of two bosses,” astrologer Jayde Young tells Bustle. “It’s an enterprising partnership. They’re both inclined to climb whatever ladder they deem as important to them, though they tend to go about this in different ways.”

In many ways, Young says these two feel like a perfect zodiac match. “They’re both incredibly stimulated by the others’ dynamism and inherent drive, and the intellectual compatibility between an Aries and Capricorn is unmatched,” she says.

When they first meet, Aries will be attracted by the way Capricorn commands attention even when they’re not saying anything. They have strong and mature energy, which Aries will find sexy. When Aries’ finds out that Capricorn is just as competitive, driven, and ambitious as they are, they’ll definitely try to pursue them. Capricorn, on the other hand, will appreciate Aries’ enthusiasm. The goat likes people who have a lot of passion, and they can easily sense that in the ram. They’ll also appreciate how direct and honest Aries is since Capricorn doesn’t like playing games, especially when it comes to dating. The fact that Aries is upfront about their intentions will go a long way with Capricorn.

While this is a couple that seems perfect for each other, they’re as stubborn as they come, and they approach life differently. Fiery Aries acts without thinking, while earthy Capricorn tends to take their time before making a decision. There’s a good chance these two will find themselves clashing over their beliefs and values. Read on to learn more about Aries and Capricorn’s compatibility in relationships, friendship, dating, and more.

Sexually, these two move at different speeds. According to Stephanie Gailing, astrologer and author of The Complete Guide to Astrological Self-Care, Aries is fiery and likes to move quickly, while Capricorn is more conservative, slow, and pragmatic. “Aries is ready to get to it and engaged in pioneering activities in the bedroom, whereas Capricorn may want things to be arranged in a certain way,” Gailing says. Aries may find themselves eventually getting bored with Capricorn’s preference for routine. At the same time, Aries’ “quick out of the gate” approach may be unfulfilling for the more sensual Capricorn.

“If they can find a pace and sequencing that works for them both, and they play with their shared love of being in control, there can be some connection,” Gailing says. “Plus, Capricorn may find Aries’ sexual passion to be really hot, whereas Aries may find earthy Capricorn’s practical knowledge of sensuality to be quite satisfying.” It’s just a matter of them being upfront with each other about their individual needs, and working together to meet those.

“Capricorns may feel that their security is threatened if they were to get so overwhelmed with hot emotions, while Aries feel like it’s a natural thing to handle,” Gailing says. “Aries’ intense yet quick processing of their feelings may confuse Capricorn, who may not be able to relate to that processing speed.”

Falling in love will also come faster to Aries than Capricorn. Aries is the type to fall in love at first sight and pursue, while Capricorn likes to get to know someone before making any moves. If Capricorn takes too long to open up their heart, Aries may decide it’s better for them to move on.

Aries and Capricorn form a square aspect, which means they’re 90 degrees apart in the zodiac wheel. Typically, pairings that are squared tend to have a more challenging dynamic. As Stina Garbis, professional astrologer and psychic, tells Bustle, both signs have aggressive, go-getter natures but express that in different ways. The ram plunges head-on into things while the sea goat initiates things tactfully.

On the plus side, both signs have no problem letting the other know when there’s something wrong. They’d also rather tackle problems as they come rather than push things off until it all comes out in one big explosive argument. However, there’s a chance these two will have the type of relationship where there’s nonstop fighting.

“When communicating this couple could get very loud, always having problems seeing eye to eye,” Garbis says. “They both think they are always right, and both want their way.” If they ever get into a disagreement, there’s a chance these two might say something they don’t really mean in the heat of the moment in order to “win.” It’s important for these two to put their egos aside for the sake of the relationship if they want it to work.

As friends, Aries and Capricorn can get along really well. “Both are highly energetic and powerful,” Inbaal Honigman, celebrity psychic and astrologer, tells Bustle. “They're each other's wingman, and enjoy reflecting each other's exuberance and strength.”

Capricorn is much more serious and work-focused than the fiery ram, so Aries may have to drag their friend out every now and then. Even if Capricorn refuses at first, they’ll be glad for the much-needed break. The sea goat, on the other hand, will be a stable, grounding force in Aries’ life.

The Biggest Potential Problem Areas In An Aries And Capricorn Relationship

Although Capricorn appreciates Aries’ passion and ability to go after what they want, there are times when they view Aries as immature, impulsive, and reckless. On the other hand, Aries may view Capricorn as a wet blanket and call them out on it. “Caps don’t have time for emotional messiness, and this perceived coldness will be off-putting to the ram,” Young says.

Are Aries & Capricorn A Good Match?

Overall, a relationship between Aries and Capricorn can be classified as challenging. But if they can put forth as much effort into the relationship as they do towards reaching their goals, this partnership has the potential to work. “Aries can add a lot of zest and inspiration to Capricorn’s outlook, whereas Capricorn can help Aries to structure their battle plans and optimize their chance of success,” Gailing says. “They are both loyal in their own ways, so if other factors are aligned, that could be a glue that holds them together.”

Stephanie Gailing, astrologer and author of The Complete Guide to Astrological Self-Care

This article was originally published on March 15, 2021