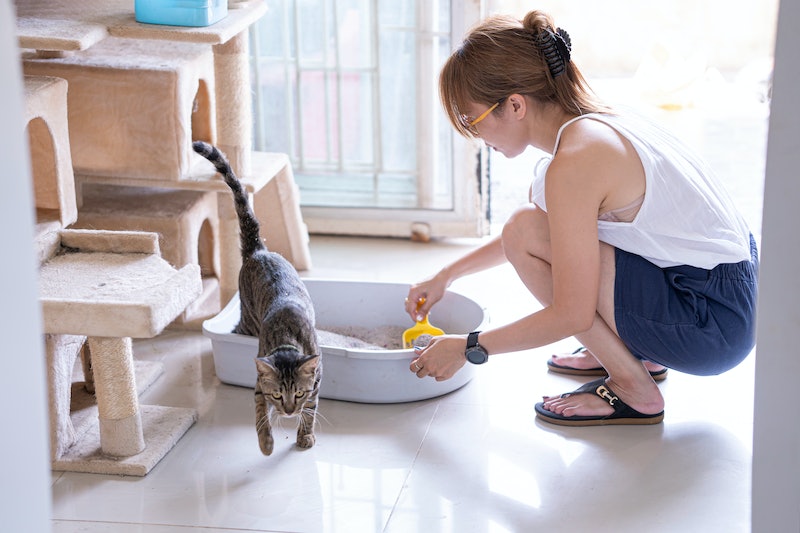 While you might be hard-pressed to find cat litters marketed as “hypoallergenic” for you and your feline, there are certain ingredients to look for to keep allergy symptoms at bay as you shop. To help find the best hypoallergenic cat litters on Amazon, Bustle reached out to two experts: Sharon Eisen, DVM, a Connecticut-based veterinarian, and Merin Kuruvilla, MD, an Atlanta-based allergist and Emory University professor for tips on avoiding ingredients in cat litter that could potentially cause you or your cat allergic reactions.

Dust is one major factor to consider when shopping for a cat litter for allergies. According to Dr. Eisen, “many litter types have dust, and cats could be allergic and sensitive to dust (as humans are).” Dr. Kuruvill also writes that dust “may contribute to airborne allergies in humans.” Certain types of cat litter, like clay varieties, can also attract dust mites, which Dr. Kuruvilla says “can aggravate nasal symptoms and asthma” in humans. When it comes to choosing a cat litter, Dr. Kuruvilla suggests: “A dust-free or low-dust formulation may help reduce symptoms in people who are allergic to dust.” You might also want to avoid cat litters formulated with bentonite clay and silica dust, two ingredients that are commonly found in clumping litters and can aggravate allergies.

Another possible culprit for allergies in cat litters is fragrance, and litters without fragrance may be better for allergy-prone cats. Likewise, cat owners “can also be sensitive to fragrances in the litter,” according to Dr. Kuruvilla. For this reason, consider opting for a fragrance-free or unscented option if you or your cat are sensitive to added fragrance in products.

One thing to note: If you’re considering hypoallergenic cat litter for allergy-related reasons, it’s always best to consult a trusted veterinarian and/or doctor to rule out any ingredients that may trigger a reaction in either a cat or a human, but if you’re looking for options that are low on dust, fragrance, and potentially irritating clumping agents, check out these cat litters are made of non-traditional materials (like coconut, corn, cassava, and newspaper). They’ve all racked up stellar reviews from cat owners who claim to experience — or have cats who experience — allergy symptoms.

This dust-free cat litter is the only option on the list that’s actually specified to be hypoallergenic by the manufacturer, making it a good choice for allergy-prone cat owners and felines. The litter is made entirely out of coconut, which has a texture that resembles fine sand or dirt — which most cats prefer. It has virtually no dust kick-up, no added fragrance, and no potential allergens, including no bentonite clay and silica dust.

Many reviewers have agreed that the litter is lightweight and absorbent, and therefore easy to scoop out when time to clean. The litter comes in sets of up to three 5-pound bags and in non-clumping (featured above) and clumping versions. The clumping litter doesn’t have as many Amazon reviews as the non-clumping version — so if you’re looking specifically for a clumping litter that’s low dust and fragrance free, you might prefer the Petfive cat litter below.

While the price of this hypoallergenic cat litter might seem steep, many shoppers have attested that the small bags lasted them a long time. One reviewer noted, “I switched from clay litter because the dust bothered me and my kitty. This is as close to hypoallergenic as it gets. It lasts twice as long as the clay litter I used to use.” When it comes to odor elimination, the reviews are mixed. While some have reported that it can’t mask the smell of pungent cat waste, others have praised it for its odor control.

One cat owner wrote: “We used the clumping clay litter for years until our son developed asthma. It was clear the clay dust was really aggravating him. Since our cat is a beloved member of our family, we were on the hunt for a dust free litter alternative. This is definitely it! There is NO dust. Our son’s asthma attacks immediately reduced noticeably and we have noticed our cat sneezes a lot less also, so the clay dust had been bothering her also. I also love how lightweight it is and that it is biodegradable.”

2. The Budget-Friendly Cat Litter For Allergies

This PURINA cat litter is 99.7% dust-free, unscented, and easy on the wallet. It’s made entirely from recycled newspaper that’s compressed into pellets — and it’s made without bentonite clay and silica dust. Like the previous option, this is a non-clumping litter, but it also comes in a clumping version, as well as two different textures (namely, soft texture and original texture). According to one shopper who reviewed the softer option, “It is not too dusty either so it doesn’t bother my allergies and asthma.” The soft and original formulas are specified to have no added fragrance, and some reviewers have noted that the litters don’t trigger their allergies. “Harsh fragrance litters really bother my allergies,” one reviewer wrote of the soft version, adding, “This is a great alternative!”

While the clumping version of this litter is also unscented — and there are no additional fragrances listed in its ingredients list — Amazon reviewers haven’t responded to it with as much enthusiasm as the non-clumping versions, with many comments stating that it’s messy. With that in mind, you might check out the next litter on the list if you’re looking for a clumping option and have some more wiggle room in your budget.

While Amazon reviewers have reported that Purina’s line of newspaper litters might not be as effective at odor control as some other types of litter, they’ve also attested that all three versions of the litter are absorbent. All in all, this is an inexpensive option (thanks to its large package size) to try for cats or people with allergies.

One cat owner wrote: “Glad I made the switch to this [...] After finding out my cat had seasonal allergies, my vet recommended I make the switch to a litter that would help with that and I found this one. It doesn’t track and when he pees I’m able to see where he did because the pellets absorb and darken. The only issues are I tend to have to buy every two weeks and I can smell when he poops. For that I’ve bought a deodorizer. My cat is super easygoing so there wasn’t really much of a transition period if any between his own litter and this one and he hasn't expressed any issues since.”

If you’re looking for something that clumps like a traditional clay-based litter, you might prefer this natural cat litter. One reviewer wrote: “Unlike clay litter, which is dusty, clumps then falls apart, and leaves a huge mess, Sustainably Yours actually calcifies liquid, making litter box cleaning A BREEZE!” They also explained that “there’s no more litter dust flying around while trying to clean” and “we haven’t had to ‘scrape’ our litter boxes clean ONCE since buying this litter.” One big difference between this pick and traditional clumping litter is that it doesn’t feature potentially irritating clumping agents like bentonite clay and silica dust — instead, it’s made with chemical-free, biodegradable cassava and corn. Plus, it is designed to be low-dust and is fragrance-free.

For less than $30, you’ll receive 13 pounds of litter, which reviewers have attested lasts a long time. One shopper even claimed that one bag lasted them up to three months. One trade-off is that several reviews have mentioned it might not be as effective at absorbing odors as traditional clay litters and is prone to some tracking — but that might be a small price to pay if you want an effective clumping litter that won’t set off your (or your cat’s) allergies.

One cat owner wrote: “Smell absorption isn’t the best [...] but is easily remedied by scooping shortly after, which you should be doing anyway. [...] Clumping is great, tracking is pretty bad, highly recommend a good litter mat. [...] Best thing is the limited ingredients, no worrying about allergies and dust. [...] I’ve found it to be very helpful when monitoring a sick cat, you can easily see urine and fecal color.”