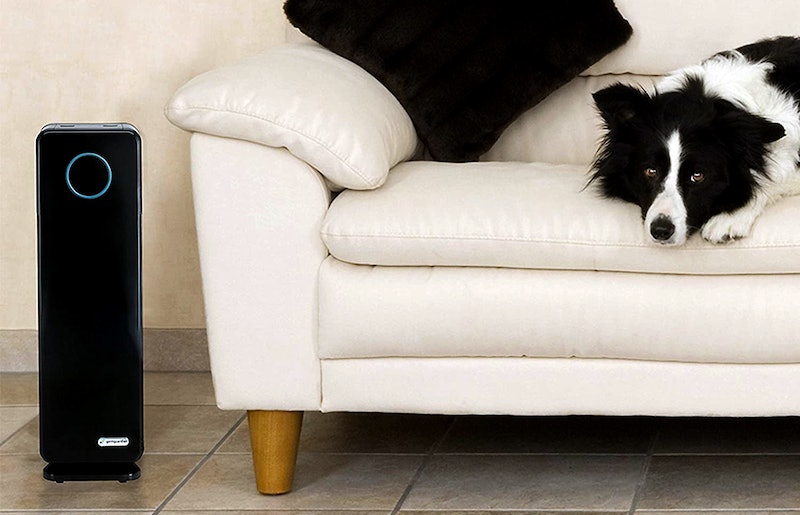 More often than not, effective air purifiers have multiple technologies in place so they can remove a wide range of impurities from the air. The best UV air purifiers use ultraviolet radiation (primarily UV-C light) — which can help reduce viruses, bacteria, and mold — but that's not all they do. Oftentimes, UV-C technology is built into an air purifier alongside other types of filters. As a result, you'll want to consider which other types of purification you want, as well as which size is best suited for your space. (However, the EPA notes that "effective destruction of some viruses and most mold and bacterial spores usually requires much higher UV exposure than is provided in a typical home unit," so keep in mind that it's not a silver bullet for air cleaning.)

On this list, you'll only find one air purifier that uses UV-C light alone. The rest have additional filters, too, the most common of which are HEPA (which removes at least 99.97% of particles 0.3 microns or larger) and activated charcoal (which absorbs odors and moisture). One even has special additional screens that pre-filter the air, further protect against bacteria, and absorb formaldehyde — but the extra purification systems you opt for will largely depend on your unique needs.

The intended square footage is another very important factor, so you should measure the room you intend to purify before you add anything to your cart. While some are designed for about 50 square feet (which is a good option for spot purification), others can cover multiple rooms. For your convenience, the choices below are organized by smallest to largest room size. That way, you can pick an option that provides the most efficient, well-rounded air purification for your home.

The GermGuardian Elite is one of the most popular air purifiers on Amazon period, but it's definitely a top-seller for UV-C models. Even though it measures about 7 inches long and plugs straight into any open outlet, its special light helps with airborne germs and viruses while also tackling unwanted odors. It's fully automatic, so you can just plug it in and let it sanitize around the clock. However, it doesn't have any filters. Since it's intended for up to 56 square feet, it's best-suited for closets, bathrooms, laundry rooms, and specific areas, like next to the litter box or garbage pail.

One reviewer wrote: "It emits a small hum from the tiny fan in it, but not too distracting at all. I like that I can easily move and plug it in other rooms. I later bought another one to cover more rooms."

For small rooms, there's this fan-favorite Guardian four-in-one purifier, which has three speed settings to choose from. Yes, it's small, compact, and sleek, but don't be fooled — this thing packs an air-purifying punch with its added filters (pre-filter, HEPA, and charcoal) and optional UV-C light that you can control on and off. It works best in small rooms like home offices, nurseries, and bedrooms, and it's extra quiet on the lowest mode, making it a good option for lighter sleepers. With a 4.7-star overall rating after more than 4,000 reviews, it's a popular pick.

One reviewer wrote: "We have two cats and an infant, have noticed a major difference in smell when we use this. Smells disappear within a day, particularly in the nursery. Air is very easy to tell the difference (comparing stepping outside vs in the room we use this in). High setting is quiet enough not to be a bother overnight."

The Pure Enrichment PureZone is designed to handle small-to-medium spaces up to 200 square feet in size. It does so with a three-stage filtration system that includes a pre-filer, a HEPA filter, and an activated carbon filter — but it also has a built-in UV-C light that helps tackle airborne microorganisms. Thanks to its touch-button controls, it's easy to switch between three fan speeds and three timer settings, plus it's clean and sleek-looking. More than 11,000 reviewers have given it a 4.7-star rating.

One reviewer wrote: "Great product! [...] Easy to set up, minimal effort in cleaning/replacing the filter (which you rarely have to do depending on usage). It is so quiet I can barely hear it, whether I am awake or sleeping."

Because it can purify spaces up to 320 square feet (though reviewers report that it can tackle much more), the VAVA air purifier is your best bet for larger rooms. Its three-stage filtration includes a pre-filter, HEPA, and activated carbon, while its optional UV-C light takes the purification to the next level. Buyers also rave that it's "extremely quiet," so it doesn't disturb them while they're sleeping, working, or watching TV. Last but not least, it has a timer so you can automatically shut off your machine at three different hour intervals.

One reviewer wrote: "I've been using this purifier for a couple of weeks now, and it works like a dream. I have it set up downstairs in the living room where I do all of my work. Even when I don't have the windows open, this purifier helps produce air flow and minimize the stuffiness that I'm used to. It also has alleviated a lot of my dust issues, plus it helped my breathing so much when the weather was really dry and the air quality outside got pretty bad."

Finally, for smaller-footprint houses or homes with open-concept rooms, there's the AZEUS air purifier, which can tackle up to 540 square feet. First, it grabs large particles with a pre-filter before it removes the smaller ones with a HEPA filter. After that, there's the activated carbon layer followed by a formaldehyde-absorption screen, then an antibacterial treatment and optional ionizer. Last but not least, the UV-C light helps zap germs. Combine all of that power with an air-quality sensor, optional night light, built-in timer, and multiple fan speeds, and it's no wonder it has a 4.7-star overall rating.

One reviewer wrote: "This air purifier has surpassed all of our expectations and this is an absolute honest review of this product. We are using it in an area roughly 850sq ft. It is amazing at how sensitive it is and it is always consistent when there are certain activities going on such as cooking, the dog running by, us with a lot of traffic going past it, etc."

More like this
The 6 Best Nespresso Machines For Iced Coffee
By Megan Gray
The 5 Best Printers For Cricut, According To Crafters
By Maria Cassano
The 5 Best Sheets For Your Purple Mattress, According To Reviewers & The Brand
By Vanessa Spilios
Designers Working On A Tight Budget Swear By These Expensive-Looking Home Upgrades Under $35
By Veronika Kero
Get Even More From Bustle — Sign Up For The Newsletter