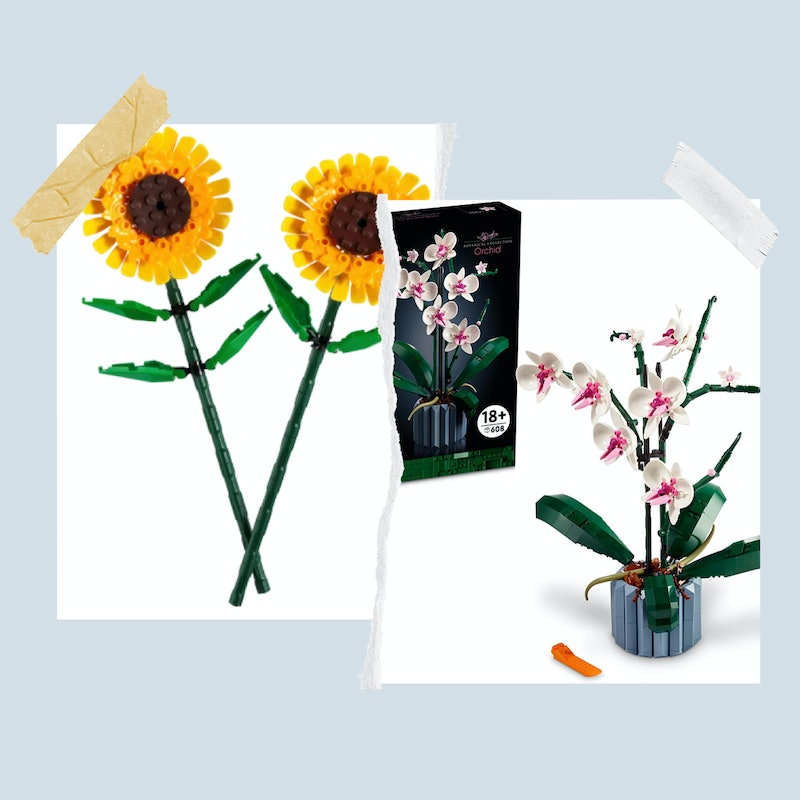 It’s the circle of life: you see a product on your TikTok For You Page or Twitter timeline, get a little curious, see a couple more posts raving about it, then eventually you go ahead and add it to your cart. You’ve seen the power of the internet when it came to those butt-sculpting leggings or that oddly satisfying foot mask — and now, the internet is tugging on nostalgic heartstrings. The latest obsession? Floral Lego sets that will satisfy your inner child and can be used as a very grown-up piece of decor.

The Lego sets of your childhood might have leaned into your favorite fandoms like Star Wars, Disney, and Marvel. Those sets are still around, of course, but the building block kits included in Lego’s Botanical Collection are the sets making adults rethink their current hobbies. With colorful pieces in more shapes than the traditional squares and rectangles you know, the Lego Botanical Collection offers an activity to do at home or a way to give flowers to someone you love that won’t droop in a week. [do we know when these were first released?]

On April 14, Lego announced a new orchid kit and succulent kit will be joining the existing collection on May 1 (the first drop hit the site in December 2020) and the reactions were expectedly positive. These botanical Lego sets have people dropping not-so-subtle hints to their followers that they wouldn’t mind a spontaneous gift in the near future, and some users are even including the botanical Lego sets in their list of “relationship goals.”

The announcement of the new botanical sets made those who haven’t jumped on the bandwagon yet question exactly why that may be. “They keep making new Lego botanical sets and NOBODY has bought me the first ones. Why don’t people just give me things??!” Twitter user @thereidtroxel wrote and TBH, same.

If you’ve been spotting the Lego Botanical sets on your social media feeds, or if this is your first time hearing of them and you already want your own, there are thankfully plenty of ways to purchase them online. The Lego site has a landing page for the whole collection, which ranges from $9.99 for a set of three tulips to $99.99 for the rare Birds of Paradise arrangement, but right now many of the sets are out of stock or on backorder via the official site.

Below, find some of the botanical sets available for preorder to add to — or help you start — your own Lego collection from other retailers. This won’t heal your childhood wounds of not getting the Lego kit you wanted for the holidays completely, but it won’t hurt.

Succulent Lego Set
Best Buy
You can preorder the Lego succulent set ahead of its May 1 release.
Lego Botanical Collection Orchid Kit
Amazon
The orchid set will be released on May 1 and is currently available for preorder.
Lego Botanical Collection Sunflowers Set
Lego
The set that makes two sunflowers is currently available on the official Lego site for purchase.
More like this
Why TikTok Is Flooded With Controversial Videos About "Pick Me Girls"
By Courtney Young
This TikTok Song About An Unrequited Romance Has FYPs In Shambles
By Emma Carey
Why Everyone Is "Soft Tagging" Friends On Instagram Right Now
By Alexis Morillo
On TikTok, Tinned Fish Date Night Is The Latest Viral Food Obsession
By Emma Carey
Get Even More From Bustle — Sign Up For The Newsletter