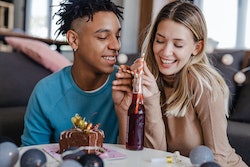 On the surface, Cancer and Libra don’t seem like a pair that would be in a relationship for long. For one, Cancer, the shy crab, values home and security. Venus-ruled Libra, on the other hand, is the zodiac’s biggest social butterfly. These charming, shameless flirts thrive when they’re surrounded by a lot of people, are notoriously indecisive, and have a tendency to fall in and out of love quickly. Despite their opposite personalities, this is a couple that will fight to keep their relationship. Cancer and Libra compatibility shows how this odd pair can make a relationship work.

“These signs together can fire each other up in both good and bad ways, as is often the case when dating signs that square each other,” astrologer Terry O’Connor tells Bustle. In the zodiac wheel, square signs are 90 degrees apart from each other, which tends to create tension between two signs. “By most standard definitions, they are not compatible at all,” O’Connor says. “But dating a square sign is a desirable proposition because of the challenges.”

Thanks to these challenges, relationships between Cancers and Libras tend to be strong. According to O’Connor, Libra will be attracted to Cancer’s calm presence and confidence, while Cancer will love Libra’s sense of fun. They’re romantics who want lasting partnerships, and they’re both cardinal signs, which means they’re initiators who welcome change. They’re considered to be the “visionaries” of the zodiac, and will bring energy into their relationship.

Since Cancer and Libra form a square to each other, there’s bound to be relationship challenges. But according to astrologer Anthony Perrotta, these hardships can sometimes create the type of tension that “strikes passion.” It might not always be easy for them to get in sync, but it’ll be hard for these two to resist each other.

As a water sign, Cancer places value on emotional connection. It’s important for them to have a deeper bond with someone to feel fully satisfied in bed. Libras are passionate, creative, and love pleasing their partners. But they’re still air signs, so their pace may be a little faster than Cancer’s. They also need variety in bed to stay happy.

“Cancer goes off of feeling, so this may motivate them to keep things interesting,” Perrotta says. “Never underestimate the kinkiness of a water sign. Libra will be along for the ride, so long as they get their fill, too.” Once there’s an established relationship and these two have a strong bond, their physical intimacy will move to the next level.

Emotional compatibility is one of the “biggest growth opportunities” for Cancer and Libra, Perrota says. Sensitive Cancer is ruled by the Moon, which means their emotions can fluctuate throughout the day. Their ever-changing moods can throw Libra’s scales off balance, which is something that Libras hate. Libras value harmony in relationships, and will do whatever it takes to fix things. But if Cancer gets passive aggressive or shuts down, it’ll only leave Libra feeling even more frustrated.

But Libras do have the natural ability to smooth things over. As long as Libra gives Cancer some time to wallow in their feelings, Libra can pick their partner back up again. “Cancer needs space, while Libra wants to talk everything out,” Perrota says. “Patience is always required. Thankfully, both signs have it.”

Overall, Cancer and Libra compatibility isn’t high due to their square aspect, which means they’re placed 90 degrees apart in the zodiac wheel. According to Stina Garbis, professional astrologer and psychic, squared relationships are typically complicated, and that’s the case here.

“Cancer wants a lot in a relationship and Libra may not be up to the challenge,” Garbis says. “This couple has many moods ranging from loving and cuddling to spite and resentment. Cancer may project unfinished business with a parent or previous partner onto Libra, and Libra won’t quite know how to feel in this relationship, leading them to become restless and withdraw.”

The good news is, there are some positives to this partnership. Both Cancer and Libra are true romantics who love being in love. “Libra may have a hard time finding someone as adoring and doting as Cancer,” Garbis says. Cancer will love being with someone who’s actually appreciative of their affection, like Libra.

As friends, Cancer and Libra make a better match as feeling are less likely to influence their behavior. While Cancer can be just as protective over their friends as their romantic partners, they’re less likely place so many emotional demands on their pal. According to Garbis, Libra encourages Cancer whenever they’re in a mood, while Cancer will always be there to listen to Libra’s woes of love. These two can have a very open and supportive friendship.

Astrologer Tia Belle adds that friendships between a Cancer and a Libra are strong and complementary. “Cancerians consider friends an extension of their family. Libra appreciates Cancer’s love and, care and is also very devoted to friends. Cancer and Libra seek comfort, stability, and security and will enjoy a long friendship.”

When it comes to communicating love and feelings, Cancer and Libra won’t have any problems. That comes naturally to the both of them, which is something they appreciate about the other. They’re also both very kind and don’t like upsetting other people, so they’ll always talk to each other with respect even during arguments.

However, they’re still very different at their core and that shows in the way they approach challenges. Cancer is an emotional sign who tends to shut down when there are problems, while Libras are more positive and will jump into action to restore balance and harmony. According to Belle, they’ll need to work on mastering their dynamic in order to avoid bigger conflicts. It’ll take some time and patience, especially on Libra’s part. Once they have a good understanding of how the other works, they can enjoy a deep and meaningful connection.

One of the biggest obstacles in a Cancer-Libra relationship is their different approaches to love. As Belle says, “Cancer is a water sign and sensitive to emotions. They seek deep connections. Libra, on the other hand, is ruled by the element of air and requires some emotional distance to thrive.” They may get into a situation where Cancer wants to stay home and cuddle all weekend long, while Libra would rather hit the karaoke bar with friends. Cancer may question Libra’s sincerity and true feelings for them, while Libra may start to feel suffocated by the relationship. Since Libras are more likely to leave a situation that no longer makes them happy, this may end with a brokenhearted Cancer.

Are Cancer & Libra A Good Match?

On the plus side, Cancer and Libra want their relationships to work. Neither sign is quick to give up when things get tough. It may take some time for these two to understand how the other works, especially Libra when it comes to Cancer’s moods. But these two will continue to fight for their relationship, despite the many ups and downs.

“They have so much to learn from one another and so much to love about one another,” Perrota says. “Although maybe not considered a match made in heaven, it could be written in the stars.”

This article was originally published on May 3, 2021