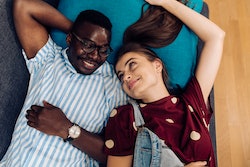 Both Cancer and Scorpio know just how tough it is to find a partner who truly gets them. Cancers are often criticized for being too emotional and sensitive, while Scorpio zodiac signs have a reputation for being intense or even possessive. A relationship between two people with these personality traits doesn’t exactly sound healthy — but that’s not quite the case when it comes to a Cancer-Scorpio relationship. Cancer and Scorpio compatibility shows why this pair of water signs make a great match.

“A relationship between watery Cancer and Scorpio is called a trine aspect in astrology,” astrologer Constance Stellas tells Bustle. “This means that two signs are 120 degrees apart [on the zodiac wheel] and in a harmonious flow with each other.” When signs of the same element get together, it’s typically easy for them to get along, as they speak the same language. The elements in astrology are key players when talking compatibility. As Cancer and Scorpio are both water signs, they tend to be sensitive, in tune with their emotions, and empathetic. When it comes to relationships, they both crave the kind of emotional connection that comes from being vulnerable and laying out all of your deeper feelings.

“In the case of Scorpio and Cancerians, their language may be silent but with a deep emotional understanding of each other,” Stellas says. “Too much emotion can get in the way, but if things are tough, they can rely on this river of feeling.”

When it comes to Cancer and Scorpio’s compatibility in the bedroom, these two are magnetically drawn towards each other. Cancer is attracted to Scorpio’s depth and strength, while Scorpio appreciates the crab’s sweet and caring nature, as well as their need for privacy. For both signs, having a strong emotional bond with their partner is key to having the most satisfying sexual experience. No matter how irresistible they find one another, Cancer and Scorpio may take their time before getting physical.

In bed, both signs are responsive and attentive to their partner’s needs. “Scorpio can be more sexually adventurous than Cancerians, but after some time, both signs will settle into a warm, passionate give and take,” Stellas says.

One potential issue is Scorpio’s sexual tastes, which can include getting a little rough. “Cancer may struggle with Scorpio’s need for kink and rough approach, but it gives them an opportunity to explore their bodies like none before,” professional astrologer Tess Lee tells Bustle. “Cancer can allow Scorpio to be comfortable in their trust to show themselves intimately.” And if trust is established, a Cancer partner be might be down to get creative the bedroom.

Although Cancers are pretty open to exploring their partner’s fantasies, they’re more sensitive than Scorpio and prefer soft and gentle touches. For Cancers, “sex is more of an arena for healing than it is for strictly boning,” Lee notes. Sex is “an intimate moment, one that needs to be filled with [more] overwhelm and passion than most can handle.” But since Scorpio is a very sensual sign, they can be a great match for the emotionally-driven Cancer.

Cancer and Scorpio are highly compatible emotionally. According to Stellas, Scorpio has more “extreme” feelings but doesn’t always express them freely. Cancer, on the other hand, is much more sentimental — they get the reputation of being the criers of the zodiac. Either way, both signs are emotionally in tune with themselves. “Since Cancer and Scorpio are water signs, they can relate to being emo,” says Lee.

Cancer and Scorpio are intuitive and can have the type of relationship where they just know what the other is thinking. “There is a shared sixth sense here — a relationship that is built on empathy and healing,” says Lee. When they’re in sync, these two can finish each other’s sentences. Water signs are naturally protective over their feelings since they tend to feel things deeply, but once they open up and trust each other, these two will form a strong bond. They may find each other talking about their dreams and feelings until the early hours of the morning.

As two water signs, Cancer and Scorpio compatibility for communication is high. They’re both ruled by their feelings, so they have the ability to understand the other when they’re in a mood. Scorpio understands Cancer’s need to sometimes retreat into their shell, while Cancer understands Scorpio’s need for privacy.

According to astrologer Clarisse Monahan, Cancer is very nostalgic sign who “tends to place credence on the past and memories.” Scorpio, on the other hand, wants to know their partner on a deeply personal level. These two will bond by talking for hours about their pasts and will share things they’ve never shared with anyone else.

If problems were to occur in their relationship, these two would look to the past for answers. “These are two signs that don’t mind getting deep and to the root of a matter,” Monahan says.

Both Cancer and Scorpio crave a bond that’s deep, emotional, and magnetic. When they meet, they’ll feel like they’ve found that with each other. According to Monahan, both signs are headstrong when it comes to dating, but in different ways.

“Cancer can be demanding about affection, while Scorpio is demanding about motives and honesty,” Monahan says. “When they get together, Scorpio will want to to go 'all in', especially when they feel they’re in a twin flame or soulmate scenario. Homebody Cancer can appreciate this intensity which they read as a kind of security.”

The sexual compatibility between Cancer and Scorpio is also really strong since they’re both unafraid of connecting on a raw emotional level.

Friendship compatibility between Cancer and Scorpio is considered high. Cancer is known for being overly sensitive and moody, while Scorpio is known for their intensity. It’s hard for them to find people who truly understand them, but they won’t find that problem in this friendship.

“Cancer and Scorpio share similar attributes, namely they both have hard shells, soft centers and can snap,” Stina Garbis, professional astrologer and psychic, tells Bustle. “They truly understand each other and can see where the other is coming from, they’re a very intuitive match and seem to know what the other is thinking, and their relationship is full of inside jokes.”

Potential Problems In A Cancer-Scorpio Relationship

Where their shared element is easy sailing, these signs have different zodiac modalities, which means they see the world somewhat differently. “​​Cancer is a cardinal sign, so they tend to initiate and create movement in this lifetime. However, Scorpio is a fixed sign, so they tend to be unmovable and more focused on maintaining what they already have,” Lee explains. “This means that Scorpio has a harder time putting things past them than Cancer, which ultimately can cross friction between them.”

Another potential challenge might be the way they express their emotions, especially when angry. Scorpio, in particular, has a tendency to hold grudges and get vindictive when they feel they’ve been wronged. One of Cancer’s biggest weaknesses is taking things personally, so if Scorpio says something hurtful, it can stay with Cancer for a long time. “Scorpio tends to not be as emotionally expressive despite having such intense feelings, which can conflict with Cancer’s need for open vulnerability,” Lee tells Bustle.

However, Cancer and Scorpio’s compatibility can be described as more of a nudging than a total butting of heads, according to Lee. “Given that they are less communicative, both signs will want to be more direct when things upset or bother them,” she says. “Cancer can teach Scorpio to express those intense feelings openly so [they] can eventually pass, [which can] lead to healthier coping mechanism skills. Scorpio can teach Cancer that they [don’t] owe people everything and to reel back when necessary.” This pair may face challenges, but nothing that can’t be worked on and overcome with practice and patience.

Are Cancer & Scorpio A Good Match?

Tess Lee, professional astrologer and digital creator in the horoscope and astrology spaces

This article was originally published on May 4, 2021