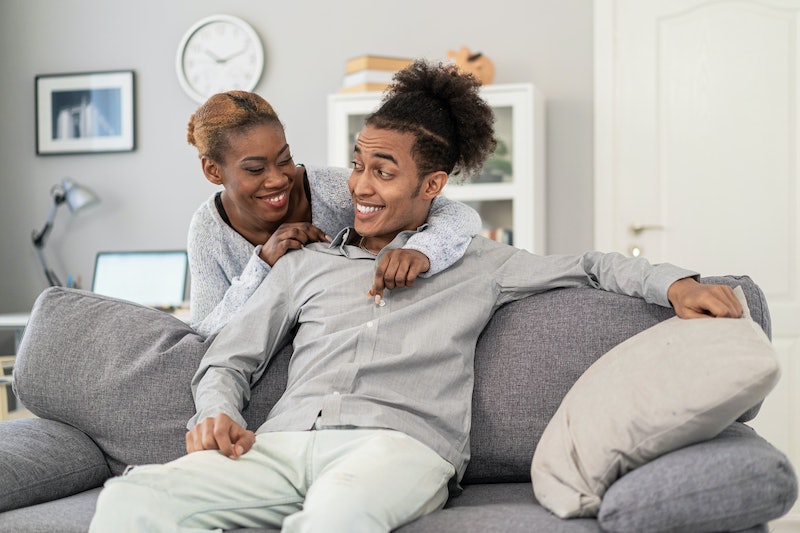 Falling for your neighbor may work out in movies, but in astrology, that’s not really the case. Capricorn and Aquarius are situated next to each other in the zodiac wheel and they couldn’t be more different. The earthy sea goat is very serious and has a more traditional approach to life, while the unconventional water bearer constantly looks for ways to push the envelope. It’s odd to think these two would ever find each other as it seems like they live in two totally different worlds and yet, they can’t help but be fascinated by each other when they first meet. Capricorn and Aquarius’ compatibility shows why this earth and air sign pair don’t make the best match.

“As neighbors in the zodiac, Capricorn and Aquarius would need a tall fence between them,” Stina Garbis, professional astrologer and psychic, tells Bustle. “Mythologically Capricorn’s ruling planet, Saturn, overthrows Aquarius’ ruling planet, Uranus, in a fairly violent way. These two very different signs could end up being enemies. It might be wise to tread carefully with this relationship.”

When they first meet, Capricorn will be intrigued by the water bearer’s intellectual prowess and the way they present themselves. “It’s easy to see how the cool, detached Aquarius could also be quite alluring for Capricorn,” astrologer Clarisse Monahan tells Bustle.

Capricorns are constantly surrounded by the same type of people, so they’ll find Aquarius’ unconventional style and sense of humor really refreshing. Capricorn doesn’t have a lot of time to play games or wait around for things to happen. If they feel like they want to get to know Aquarius, they won’t hesitate to make the first move. This will be appealing to Aquarius who appreciates when people aren’t afraid to go after what they want.

However, their initial fascination with each other may quickly fade. Earthy Capricorn is more traditional in their beliefs, while Aquarius is a non-conformist. According to Garbis, Aquarius goes about things in their own unique way, which can be puzzling or frustrating to the more pragmatic sea goat. Aquarius tends to be more easygoing than Capricorn and may find themselves becoming increasingly irritated with Cap’s serious nature as time goes on.

Truth be told, this isn’t a pair that typically has a lot of sexual chemistry. “This tends to be the case with neighboring signs,” Monahan says. “This aspect is known as a semi-sextile, and it indicates difficulties or challenges, because their two energies feel, paradoxically, alien to one another. Capricorn and Aquarius might be next-door neighbors in the heavens, but would tend to be bad together in between the covers.”

Their less-than-perfect sexual compatibility goes back to their basic personality traits. Capricorn is practical, stable, and somewhat demanding. They’re also pretty traditional in their tastes. More adventurous Capricorns may be into power play, as it’s a very natural role for them. Since they’re ruled by Saturn, the planet of restrictions and limitations, sea goats struggle with letting go completely.

Aquarius, on the other hand, is a lot more adventurous and appreciates innovation. They love trying out new sex toys, positions, and places to get it on. They’re also very independent and will ice out people who place too many demands on them, Monahan says. Playing a more submissive role isn’t something Aquarius is really comfortable with. In fact, astrologer Lupe Terrones previously told Bustle, submitting to someone, even in a sexual way, could “translate to real life and hinder their beloved freedom.”

Capricorn and Aquarius may find themselves fighting over who gets to be in control, which will be more frustrating than it is playful or sexy. “That's not to say a relationship like this wouldn’t work,” Monahan says. “However, there probably won’t be multiple mind-blowing orgasms between these two.”

Aquarius has a reputation for being on the cold side and Capricorns tend to be more reserved when it comes to sharing their feelings. “Neither are super emotional so this can end up being a more ‘dry’ relationship,” Monahan says. “However, neither appreciate mawkish displays of sentimentality so this can actually be a plus for them.”

Despite the fact that neither sign is too emotional, this can become an issue down the road. Capricorns, in particular, may be all business, but they secretly want to come home to a warm, inviting, and loving space. It’s why they work really well with a sign like Cancer, who’s willing to provide that for them without Capricorn having to ask.

“With Capricorn and Aquarius, there’s no one here to really crack open the vulnerability in the other,” Monahan says. “They need to work at finding that emotional common ground, should they want it.” Since they’re both very independent signs, they may end up in a situation where they’re long-term roommates as opposed to romantic partners.

At first, these two may find themselves drawn towards each other because they both have a unique way of looking at the world, and will enjoy learning about each other. However, that initial fascination with each other may fade as they spend more time together. When it comes to dating, Capricorn and Aquarius' compatibility is fairly low. In fact, Garbis says this earth and air sign pair make for an "odd" couple that is likely to face challenges in the dating phase alone.

"Capricorns like people to be on time and in line, and may find their Aquarius partner a little annoying since they’re hard to tie down," Garbis says. "At the same time, Aquarius enjoys people who are very flexible and that is definitely not Capricorn‘s middle name."

At the end of the day, they're very different people with opposing needs in a relationship. Capricorn needs structure while Aquarius lives by their own rules. A lot of compromises will be required to make this relationship move past the dating phase and into a committed relationship.

If you take romance and commitment out of the equation, there's a chance these two can work well as friends. According to Garbis, Aquarius loves having a lot of friends and will appreciate Capricorn's loyal nature. Capricorn, on the other hand, will love how intellectual and knowledgeable Aquarius is about a wide range of topics.

However, Capricorn and Aquarius are still very different at their core and may annoy each other because of it. For instance, Aquarius has a tendency to flake out on plans at the last minute, which can be very upsetting to Capricorn who has a carefully planned out schedule. Or Aquarius may get frustrated at how Capricorn is so serious about everything all the time. While they can have a good time together, there is a limit to how much they can tolerate each other. In other words, they make the type of friends who can only handle each other in small doses.

Capricorn and Aquarius will learn a lot from each other through the conversations they have each day. They love exchanging ideas and opinions, and Capricorn in particular will be very fascinated at Aquarius' unique way of looking at the world. Neither sign is very emotional, which is something they both appreciate about the other.

However, if they find themselves disagreeing about an issue, solving problems can be a challenge. "Aquarius can be a slippery fish and always has an excuse for everything, whereas a Capricorn shoots from the hip and tells it like it is," Garbis says. "They may find each other very frustrating. Capricorn may lose their temper saying, 'Why can’t you just tell it to me straight and be honest with me?' while Aquarius argues, 'Can’t you just let things go?'"

Fortunately, both signs are problem-solvers. Once things cool down, they'll be able to talk it out logically and smooth things over.

One of the biggest challenges these two will have to overcome is their different approach to problems. “Communication comes easy to Aquarius; however, being a fixed air sign, they can also be quite unyielding in their viewpoints and how they approach life,” Monahan says. “Capricorn is the practical communicator, always thinking of the most logical and earthy way to approach things. Aquarius might not appreciate Capricorn’s pragmatic approach, and likewise, Capricorn may find Aquarius’ lofty thinking annoying.”

Another big challenge here lies in their personality disparities. Capricorn is very serious and practical, while Aquarius is much more optimistic and easygoing. According to Garbis, “Capricorn might not always appreciate Aquarius’s inventiveness and creativity and may think that they need to get more serious in their life.” Aquarius won’t like having a partner who tells them they need to change in any way. This could be a major deal breaker for them.

They say that opposites attract and at first glance Capricorn may appreciate Aquarius’s fresh outlook on life, and Aquarius may enjoy a strong and secure partner who can keep them directed and on task. If they can find a balance and see that each has a little bit of what the other is missing, they could make for a fascinating couple, where Capricorn learns how to loosen up and Aquarius learns how to get to the point. But without maturity and willingness to compromise, this partnership could be a very frustrating one as time goes by.

More like this
The 3 Zodiac Signs Most Likely To Get Married Later In Life
By Kristine Fellizar
12 Active Date Ideas That'll Get You & Your Boo Outside
By Lexi Inks
4 Zodiac Signs That Will Take Forever To Admit They Like You
By Kristine Fellizar
18 Hinge Prompt Answers To Try If You’re Looking For Something Casual
By Lexi Inks
Get Even More From Bustle — Sign Up For The Newsletter
From hair trends to relationship advice, our daily newsletter has everything you need to sound like a person who’s on TikTok, even if you aren’t.

This article was originally published on Jan. 26, 2022