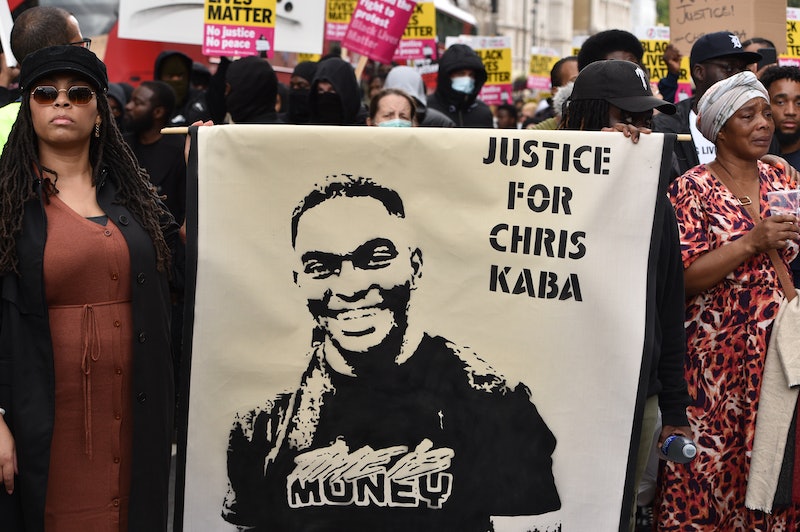 On Monday, Sept. 5, 24-year-old Chris Kaba was shot dead by the Metropolitan Police in Streatham, South London. The incident occurred after an automatic number plate recognition camera "indicated the vehicle" that Kaba was driving had been "linked to a firearm incident in the previous days," per the Independent Office for Police Conduct (IOPC). It was later reported that the car wasn't registered to him.

A pursuit followed, resulting in Kaba being shot inside the car. After being treated by paramedics on the scene and transported to a local hospital, he died two hours later. As Metro reports, the Met Police later confirmed that Kaba was unarmed. Kaba's family called for "a homicide investigation into the death from the outset" after alleging that the IPOC's immediate reaction to the incident was "mishandled," per The Guardian. The police watchdog began a homicide investigation into Kaba's death on Sept. 9, but stated that it "does not mean that criminal charges will necessarily follow," reports BBC News.

Who Was Chris Kaba?

Kaba was a 24-year-old rapper from Wembley, London, who was due to be married and was expecting a baby. "He was so loved. He was so funny. He was super-kind. Crazy. He was always happy. He'd do anything for you," said Kimberly Alleyn, the mother of Kaba's soon-to-be wife, Karima Waite. "He was a fiancé, he was due to get married in five months time. He's got a baby on the way that he's never going to see.”

"It's horrible and so shocking and so sad," she continued, adding that her daughter was "in a tremendous amount of pain" from the sudden loss of Kaba and the nature in which he was killed.

What Happened To Chris Kaba?

Kaba was killed on Sept. 5, 2022, after being shot by a police officer in Streatham Hill, London. According to the Metropolitan Police, the vehicle Kaba was driving was "stopped following tactical contact" in the Kirkstall Gardens area, where a "police firearm was discharged" through the driver's side of the windshield. Officers reportedly gave Kaba immediate medical attention before the London Ambulance Service arrived. Unfortunately, two hours after being taken to the hospital, Kaba died from the gunshot wound.

Since his death, the Independent Office for Police Conduct (IOPC) has launched a homicide investigation. The Metropolitan Police confirmed on Sept. 12 that the specialist firearms officer involved in Kaba's death “has been suspended from duty” following “careful consideration of a number of factors, including the significant impact on public confidence.”

What Has Chris Kaba’s Family Said?

In a statement following the incident, the family shared their devastation. "We need answers and we need accountability," they said. "We are worried that if Chris had not been Black, he would have been arrested on Monday evening and not had his life cut short."

Before the launch of the IPOC's homicide investigation on Sept. 9, Kaba's family was dismayed that by Sept. 7, no such investigation had been opened. Now that it's taking place, the family "demands that the commissioner of police of the metropolis immediately suspend the firearms officer, pending the outcome of the investigation."

Kaba's mum, Helen Nkama, told BBC News through tears that her "heart is broken" and that she needs "criminal justice to be done" on behalf of her son. "Police have taken Chris from me, I don't know how to say, but I need justice to be done for Chris. This is very racist, it's no good."

Kaba’s father, Prosper, expressed his shock "to see that, in this century, from specialists of the law, like police, can shortcut someone's life, especially a young boy." He added that "no one can give any justification on what the police act" and that, for them, "it's totally racist and criminal."

Kaba’s cousin, Jefferson Bosela, told the BBC Radio 4’s Today programme on Sept. 13 that it had been almost half a day before the family was informed of Kaba’s death. “The family found out 11 hours [after he died], so his mum would have woken up and have gone to work not knowing that her son wasn’t alive any more.”

As per reports on Sept. 21, the family has since met with Metropolitan Police commissioner Sir Mark Rowley and IPOC Director General Michael Lockwood. They have also reviewed the body cam footage from the officers involved. Kaba’s mum described the viewing as “hard … very hard” and that what she wants now “is justice for my son and I want the truth.” Meanwhile, Kaba’s cousin, Bosela, added that “for now, the family are going to take a break and step back.”

How Has The Public Reacted?

On Sept. 10, protestors marched from Parliament Square Whitehall to the headquarters of the Met Police, calling for justice for Kaba. Musician Stormzy was among the protestors, telling the crowd that he was initially "hesitant" about speaking because he knows "a lot of the time even with my name, and how the British media stays, they try and turn it into this other thing and use my name to try and make it about me, but it's nothing about me."

He continued: "It's about us, it's about the family, it's about everyone grieving. Chris has a mother, he has a family, he has brothers, he has friends, people who knew him their whole life, for them, this is unbearable." He encouraged the protestors to maintain their stamina and "do whatever you can do to help. But also have the stamina to keep going because they have killed someone, that's murder. Just keep going because the family needs you."

Further protests took place in front of Scotland Yard on Sept. 17, with former Labour leader Jeremy Corbyn and Streatham MP Bell Ribeiro-Addy in attendance. Another protest took place at Millenium Square in Leeds on Sept. 21, where organisers stood “in solidarity” with Kaba’s family.

What Have The Metropolitan Police & The IPOC Said?

On Sept. 7, Commander Alexis Boon expressed his "sincere condolences to the family and friends" of Kaba and that he recognised "the devastating and lasting impact this tragic incident will have on them." He said the Met was "co-operating fully with the Independent Office for Police Conduct" and that he, "along with the local policing commander, have met with key partners and community members, and will continue to actively work together to engage with, and to reassure the public, at this difficult time."

As the IOPC's investigation began, its Regional Director Sal Naseem said they were "working hard to piece together all of the circumstances surrounding this incident" and that it will "take some time before our investigation is able to uncover all of the facts." Naseem called the investigation "complex in nature," sharing that "there is a large amount of evidence that our investigators are continuing to gather and review."

In another statement published on Sept. 8, IOPC Director General Michael Lockwood said that while "fatal police shootings are rare… when they do happen it's important they are thoroughly and robustly investigated by the IOPC, which is independent of the police and the Government." He added that the investigation has "gathered a large amount of evidence" and "would ask that the community bear with us as we continue this important work."

Assistant Commissioner Amanda Pearson provided an additional statement on Sept. 9, acknowledging that "this shooting is a matter of grave concern, particularly for our Black communities." She added that firearms officers "understand and expect on the very rare occasions they discharge their weapons they will face intense scrutiny" and that she doesn't "underestimate the impact on them of this development."

In a statement provided on Sept. 16, the IPOC said they are exploring “all circumstances surrounding” the incident. This includes “how the officers came to be aware of the vehicle” Kaba was driving, and if officers “had any prior knowledge” of him in addition to their “decision-making and actions” leading to his death. They will also investigate whether race “influenced any actions taken by police.”

IPOC Regional Director Sal Naseem advised the family that they aim to complete the investigation “within six to nine months.” On Sept. 21, the IOPC confirmed that the inquest into Kaba’s death will begin on Oct. 4.

More like this
Prince William Condemns “Unacceptable” Comments Made To A Black Guest At Buckingham Palace
By Shahed Ezaydi
The David Beckham Qatar Controversy, Explained
By Sophie McEvoy
MOBO Awards Found Kanya King On The Woman Whose Grit & Determination Spur Her On
By Kanya King
'Waterloo Road' Is Back, With More Than A Few Familiar Faces
By Sam Ramsden and Vivian Iroanya
Get The Very Best Of Bustle/UK