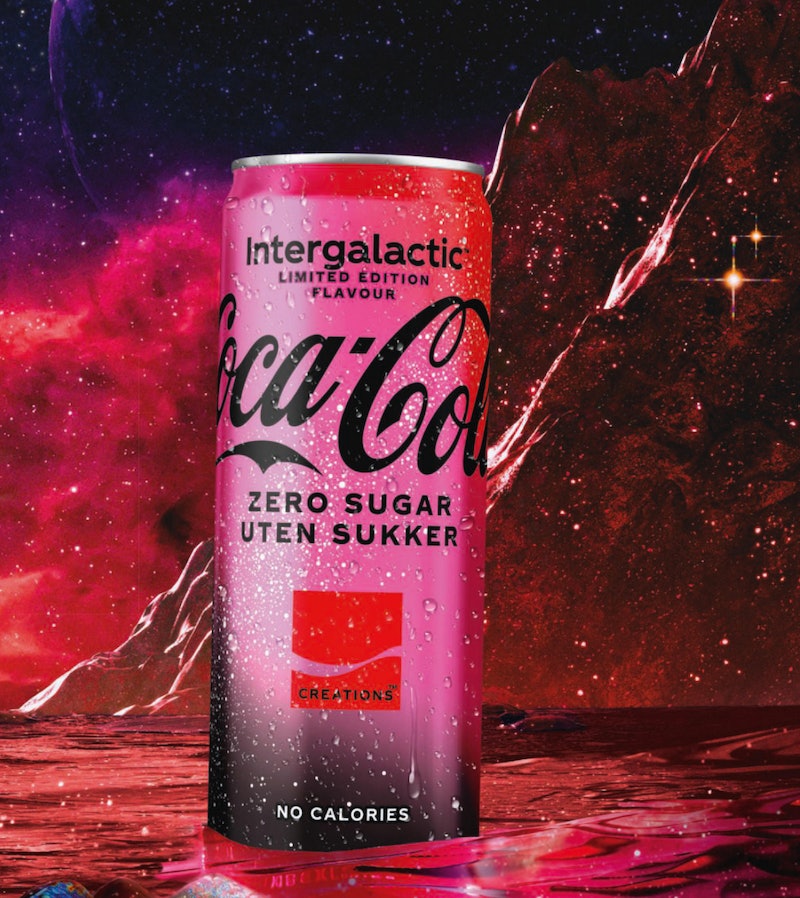 Way back in 1985, Coca-Cola became the first soft drink to take a trip into space, with astronauts aboard the Space Shuttle Challenger swigging from specially modified cans designed to keep their fizz in zero-gravity conditions. Though taste-tests weren’t a resounding success, it still earned the caramel bev’ a spot in the history books, and over thirty years later, they’re celebrating with the limited edition Intergalactic coke. Supposedly, it tastes like space.

“​​Intergalactic is a refreshing take on a much-loved Coca-Cola taste consumers know and love,” says the brand in a press release, “with an innovative dash of the unexpected and the delicious. This includes the liquid’s brilliant reddish starlit hue, as well as a cooling sensation which evokes the feeling of a cold journey into space.”

Punters who have already managed to get ahold of the limited-run drink have compared it to candy-floss, “custard cream” biscuits, and “chocolate and coffee”.

Fancy swigging on this strange, extra-terrestrial potion? Limited stocks of the bright pink cans are available now in participating stores across the UK until supplies run out. Though Coca-Cola haven’t published a master list of retailers, a handful of people have tweeted about tracking cans down at Co-op. A taste of another galaxy will set you back 77p for 250ml, which is frankly much cheaper than booking a flight on Virgin’s commercial space-line.

Copping a can will also bag fizzy fans free gig tickets… sort of. Every can of Intergalactic also comes with its own QR code, which leads to an augmented reality performance by hotly-tipped US pop artist Ava Max. In a show that’s been dubbed “Concert on a Coca-Cola” by the brand, the rising star will perform three of her best-known hits: “Kings & Queens,” “Sweet but Psycho,” and “EveryTime I Cry.”

And if that wasn’t enough to be getting on with, Coca-Cola has now opened a concept store in London’s Covent Garden — the first of its kind in Europe. Visitors will be able to browse the brand’s most recent fashion collaborations, get cans of Coke customised with their own unique message, and purchase a drink from the Coca-Cola Beverage Bar.

This article was originally published on April 14, 2022