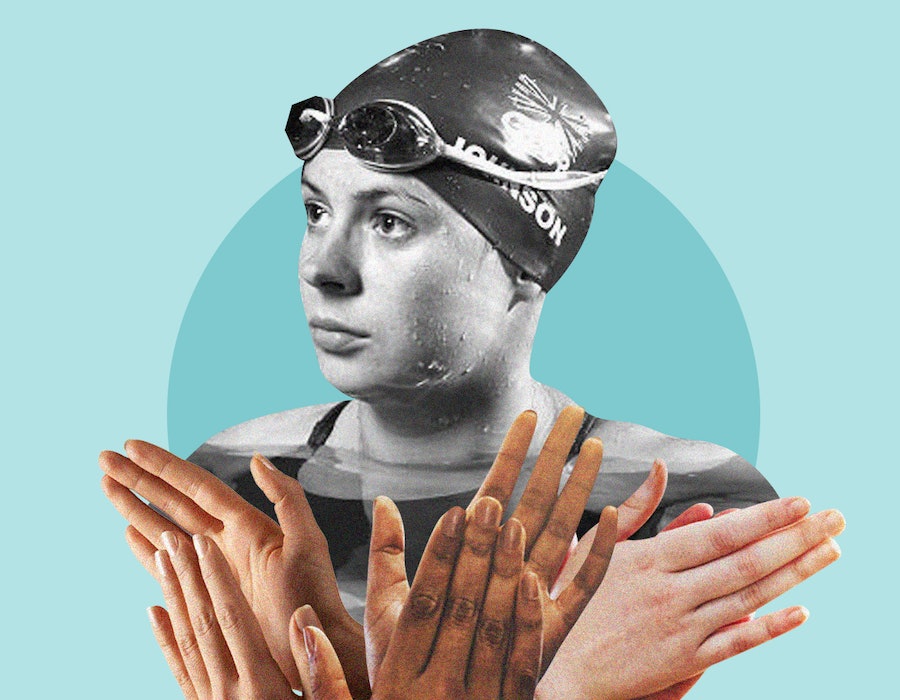 Getty, Margaret Flatley/Bustle
Do It For The Applause

Welcome to Do It For The Applause, a series in which we ask performers, writers, business leaders, and public figures to think about the notion of applause and what it means to them. Today, we hear from former Paralympian swimming champion and founder of The Ability People, Liz Johnson.

Liz Johnson's gold medal win at the 2008 Beijing Paralympic Games is the reason people watch sport. The British swimmer, who at the time was world record holder for women's SB6 100m breaststroke, was up against defending champion Sarah Bowen from Australia. Not long after the competitors left their diving boards, it became clear this was a two-person race, and one that would be decided by fractions of a second.

At the end, Johnson pops her head above the water, reads her time, and jumps up, thrashing the water in delight. She's won. Speaking to her on the phone, almost 12 years later, I ask for one word to describe her feelings in that moment.

She continues: "When you initially hit the wall, the relief is incredible. It's liberating. As an athlete, nobody puts more pressure on you than you put on yourself. You can rationalise and say to yourself, 'I've done everything I can, and I'm doing my best performance,' but there's a part of you that is so desperate to win, because that's what you've trained to do."

Losing, on the other hand, "feels like someone's stabbed you in the eyeball," Johnson tells me. It's a pain that directly correlates to the time separating you and the person in front or behind. In this case, half a second; Johnson clocked in at 1.41.87, while the silver medalist, Bowen, touched the wall at 1.42.39.

The idea of that your dream can be decided in milliseconds is "a difficult thing for some people to get their head around," Johnson says, but it's what makes athletes so resilient. "As an athlete, I think the rest of the world almost doesn't – or can't – exist. Because you're so immersed in your world."

For Johnson, this is part of the appeal of sport, and is exactly why she set her heart on swimming. "When your head's in the water, you forget about the world outside," she explains. Speaking specifically about competing with a disability, Johnson, who has cerebral palsy, says: "I've grown out of this but, as a kid, I had anxiety about trying to make sure I looked like everybody else or acted like everybody else. Because I never wanted anyone to go, 'Oh, we'll give you a head start because you've got CP' or something."

With swimming, "even though you've still got the [disability], there's an element of freedom involved," Johnson tells me, because you're not so aware of everyone else: it's just you and the water.

Along with swimming, Johnson credits her mum for the self-assurance she feels today. "I'm very grateful to my mum for having some very stern words with me at various points in my childhood, giving me the reality check that I needed [about not looking] the way everybody else did and not [doing what] they did, because I'm just not built like them. It meant that I became very OK with being me."

This attitude has carried her through a successful Paralympian career. Without it, Johnson says, "every single second of my day would have been miserable." She continues: "I've got one functional arm and one functional leg, so nothing I do is textbook. I don't get my validation from what other people think of me."

How would she feel if she were facing a Paralympic Games cancellation, as many of her friends and colleagues are this year? "Before my first games at Athens, when I was 18, I would have gone, 'Oh well, that's disappointing, but there's next year,'" she begins. "Had it happened before [my final games in] London, I would've been like, 'Oh my gosh, I don't know if I've got another year in me.'" There's not "one size fits all" reaction, Johnson says, but, yes, the resilience we see in athletes will certainly help them to recover from this blow, no matter their situation.

Now she's retired, Johnson's energy is focused on The Ability People, a recruitment agency and social enterprise she co-founded in 2018, and which won her a place on the BBC's 100 Women list that same year. The organisation's main aim is to "support positive change through advice and education", per their website; to make workspaces "authentically inclusive" and to "normalise the differences that people have," Johnson explains. "It doesn't matter whether a company is two people or 200,000 people, because ultimately the principles that we live by around that authentic inclusion could apply to any walk of life."

With her years of experience, an enviable amount of confidence and a passion for helping others to succeed, read on to find out what applause means to Johnson across the board.

The people closest to me: my friends and family who know me, and keep me honest and grounded.

Actions speak louder than words. Change or outcomes as a result of my involvement and influence are the best type of applause.

Ones that are genuine and come from the heart.

I dislike compliments that are sycophantic or patronising.

I think often we are doing what we believe to be right and know is true to us, so it can feel as though praise is unwarranted. If you feel you have a responsibility to do something and then do it, it can feel awkward being singled out for it; especially because most great things require a collaborative approach. We can't do anything totally alone.

Anyone and everyone who is making a positive, authentic contribution to changing the way the world of inclusion looks and operates for the masses.

More like this
TikTok Has A Genius Old School Hack For Saving Money
By Sophie McEvoy
Ben & Jerry’s New Sundae Flavours Are A Chocoholic’s Dream
By Sophie McEvoy
What The UK Blocking Scotland’s Gender Recognition Bill Means
By Sam Ramsden
90 Epic Truth Or Drink Questions To Play 'Say It Or Shot It' With
By Bustle UK
Get The Very Best Of Bustle/UK
Sign up for Bustle UK's twice-weekly newsletter, featuring the latest must-watch TV, moving personal stories, and expert advice on the hottest viral buys.