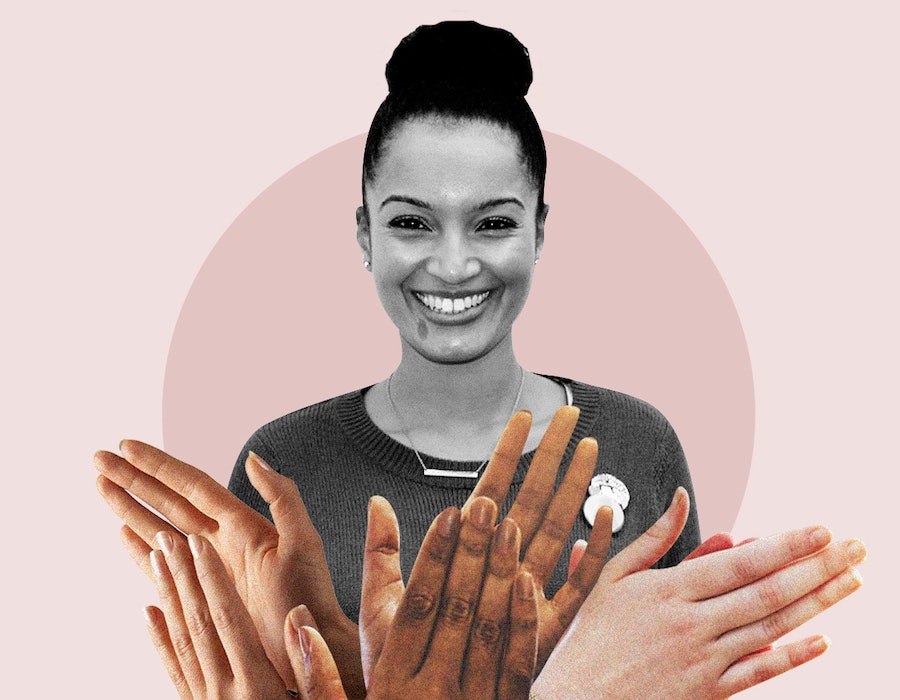 Courtesy of Deborah Johnson PR
Do It For The Applause

Welcome to Do It For The Applause, a series in which we ask performers, writers, business leaders, and public figures to think about the notion of applause and what it means to them. Today, we hear from Khalia Ismain, the founder of Jamii, a discount card and discovery platform for Black-owned businesses in the UK.

Khalia Ismain is a doer. Where her partner and Jamii co-founder Terory Briscoe-Larebo is the “thinker” behind the brand, overseeing strategy and organisation, Ismain says: “I just do things.”

It’s a mindset she developed during a trip to Kenya back in 2015. Just a few weeks after graduating from university, Ismain moved to Kericho for three months, volunteering as “an extra pair of hands” for various business owners in the town as part of a programme run by the International Citizenship Service.

“I just learned so much about what it is to be a small business owner,” she tells me. “With entrepreneurship in Kenya, you just get started. There's not that kind of fear attached to it. It's just like, ‘I want to sell shoes.’ The next day, you sell shoes.”

Before arriving in Kenya, Ismain had the beginnings of an idea that would champion Black-owned businesses in the UK and bring about long-lasting changes in people’s shopping habits. The first wave of the Black Lives Matter movement had just begun to take shape, and Ismain wanted “to make buying Black something that was really positive and something that would be sustained.”

After returning from Kenya, Ismain got to work, turning her thoughts into actions. The result was Jamii, a discount card and discovery platform for 180 Black-owned businesses across makeup, hair, skincare, clothing, homeware, stationary, and more. Since launching in August 2016, Jamii has also hosted pop-up events, too – the second of which begins today (Oct. 28) and runs until Nov. 1. It features 22 businesses, with a physical (and COVID-safe) space being set up in London’s Boxpark Shoreditch, and a virtual space appearing on their website.

Speaking about what drives her, Ismain, whose father is from Jamaica and St Lucia, says: “It’s a real love for my heritage, for my community, for the culture that I come from, and a real desire to see it respected.”

For Ismain, there’s nothing more exciting than hearing that one of their partner brands has just hired someone new or that a customer has just discovered a product they wouldn’t have otherwise known about.

“I'm driven by what could be achieved [through] Jamii. Because if we are able to contribute towards creating a burgeoning Black British business community, that money will trickle out the community in terms of employment, in terms of the creation of institutions, in terms of more political power, and that will uplift us. And everyone wins when communities are uplifted.”

Ismain’s perspective of applause is pretty unique as it is built off the success of others. I ask about that and more below.

I think I would probably say Jamii customers. Their applause means a lot to me. While I kind of always knew that businesses would be responsive to Jamii (because it’s trying to help them), the customers were the unknown factor. I asked myself: ‘Are people going to take to it?’ ‘Are they going to use the debit card?’ So, for me, applause from Jamii cardholders is the best.

I think texts. I like to hear from my family because they see how hard I work – they see behind the scenes, do it means more when they’re like, “Well done.”

My favourite type of compliment is one where people like one of my ideas because, like I said, I'm not a thinker. So when I have a good idea, I'm like, “Yes!”

It’s the backhanded compliment. I’ve had a lot recently along the lines of “You've done well so far, but here's why you need my help.”

Why do you think so many of us find it so difficult to accept praise?

I think it's a very English thing because we're supposed to be unemotional and not fake that kind of thing. Definitely, I'm the worst at that. When people praise me, I'm like, "Oh my God, stop, that's embarrassing." I think that's something that is just programmed to not want attention, positive attention. Although we crave it, when it comes, we’re like, “Stop, you're doing too much.”

I always find this question really hard because I work with so many different businesses. But one brand I just think is always amazing is KitsCH Noir. [The brand’s founder] Cherelle has been working on her cards for so long – for about three, going on four, years. She has a full time job yet she still finds the time to work on KitsCH Noir all the time. So, yeah, I think she is amazing.

More like this
Twitter Has *A Lot* To Say About The "Single Penalty”
By Sam Ramsden
TikTok Has A Genius Old School Hack For Saving Money
By Sophie McEvoy
Siva Kaneswaran's Net Worth Shows The Value In Chasing The Sun
By Bustle UK
These Artists Are Reimagining Black History Month To Create A Better Future
By Katie Mitchell
Get The Very Best Of Bustle/UK
Sign up for Bustle UK's twice-weekly newsletter, featuring the latest must-watch TV, moving personal stories, and expert advice on the hottest viral buys.