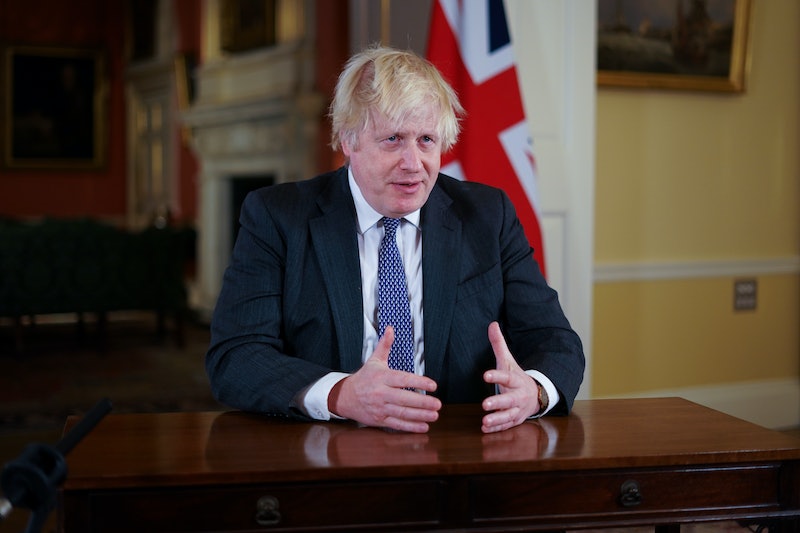 The government is facing even more scrutiny following the announcement on April 12 that Prime Minister Boris Johnson and Chancellor Rishi Sunak have been fined by police for attending a Downing Street party during lockdown. As BBC News reports, further penalties in relation to what has now been dubbed “partygate” are likely to be announced, and a string of reports over the past few months have shed light on the Met Police’s ongoing investigation into alleged lockdown parties held in Downing Street and Whitehall.

On Jan. 14, The Telegraph revealed that two parties took place in Downing Street on the eve of Prince Philip’s funeral on April 16, 2021.

Reportedly going on into the early hours, the two events were allegedly a leaving party for the Prime Minister’s then Director of Communications James Slack, as well as another for one of Johnson’s personal photographers, per BBC News.

“The Queen sitting alone, mourning the loss of her husband, was the defining image of lockdown,” Lib Dem leader Sir Ed Davey tweeted following the revelation. “Not because she is the Queen, but because she was just another person mourning alone like too many others. Whilst she mourned, No. 10 partied.”

Calls for Boris Johnson to resign as a result of these party allegations continue to rise, with the Prime Minister previously being told to “lead or step aside” by Tobias Ellwood, who chairs the defence select committee. Labour leader Sir Keir Starmer has also called for the Prime Minister’s resignation, stating that the Conservative Government is “totally unfit to govern.”

On May 23, photographs of the Prime Minister at a Downing Street leaving party in Nov. 2021 surfaced - an event he had previously denied attending. At the time, strict lockdown rules were in place. On June 6, Conservative MPs triggered a vote of no confidence in the Prime Minister, which he narrowly survived. A couple of weeks later, on June 24, the Conservatives lost seats in Wakefield, West Yorkshire, and Tiverton and Honiton, Devon, in a double by-election vote - casting further doubts over the premiership of Johnson.

In light of this latest revelation, find a full timeline of the ongoing “partygate” scandal below.

On Dec. 20, 2021, a photo emerged of Boris and Carrie Johnson with up to 17 staff members enjoying drinks in the Downing Street garden after a COVID press conference in May 2020. Responding to the image, the Prime Minister’s spokesperson said in a statement: “These were individuals working outside of normal working hours. It was not against the regulations for those individuals to have a drink outside working hours, but still discussing work.”

Lockdown restrictions at the time meant that if in-person meetings were to be held, they should remain “at least two metres apart”.

In an email sent by the Prime Minister’s Principal Private Secretary, Downing Street staff are invited to a drinks party on May 20 to “make the most of the lovely weather”. As Martin Reynolds wrote in the email, the gathering was an opportunity for staff to relax “After what has been an incredibly busy period” by having some socially distanced drinks in the No. 10 garden this evening,” per ITV News. “Please join us from 6pm and bring your own booze!”

Boris Johnson’s former top adviser Dominic Cummings alleged on Twitter that another party took place on Nov. 13, this time in the Downing Street Flat. “Will the CABSEC also be asked to investigate the *flat* party on Fri 13 Nov, the other flat parties & the flat’s ‘bubble’ policy…?” he tweeted on Dec. 8, 2021.

When asked about the party during PMQ’s, Johnson said he couldn’t confirm whether a party had taken place, but if it had he was “sure that whatever happened, the guidance was followed and the rules were followed at all times”.

Per iNews, Johnson gave a speech during a leaving party for a senior aide, Cleo Watson, on Nov. 27. When asked about his attendance, he didn’t say whether he was there or not. Instead, he said that “the guidance and the rules have been observed at all times”.

On Jan. 17, The Mirror alleged that Johnson attended an event to mark the departure of defence adviser Captain Steve Higham during the run-up to Christmas, but no date has yet been given. Reportedly only at the event “for a few minutes”, Johnson reportedly gave a short speech and thanked Higham for his service among a “small number of No 10 staff.”

According to The Times, a “raucous” party took place in the basement of the Conservative Campaign Headquarters on Dec. 14. The Guardian alleged that “about two dozen staff were present”, including Conservative London mayoral candidate Shaun Bailey and his campaign team.

On Dec. 11, 2021, a photo surfaced of Boris Johnson hosting a Christmas Quiz virtually at No. 10, according to The Mirror. “No work was discussed, it wasn’t a business event,” a source told the newspaper. “Nobody was working that evening, it was purely a social event.” While described as a “virtual gathering”, BBC News notes that sources said some “were in groups in the room sat in teams”.

In late November last year, it was alleged that a Christmas party took place at Downing Street on Dec. 18, 2020, during a time when all indoor mixing was banned except for household bubbles. The only justification to gather was for if it was “reasonably necessary for work purposes”, per BBC News.

This allegation was later exasperated by a video leaked to ITV News showing the then press secretary Allegra Stratton joking about the possibility of there being a party during a rehearsal press conference.

Two parties were alleged to have taken place on April 16, 2021, the night before the Queen would say goodbye to her late husband Prince Philip. According to The Daily Telegraph (via The Guardian), eyewitnesses saw about 30 people at social events in different parts of Downing Street, before the parties combined in the garden. According to one source, a staff member was seen returning with a suitcase filled with bottles of wine.

Shortly after the news broke, No 10 formally apologised to Buckingham Palace about the parties held. According to The Independent, a Downing Street official made the apology in a phone call rather than from Johnson himself, who is said to have not been at No 10 at the time of the parties, according to his spokesman.

At the time of these parties taking place, up to six people or two families could meet outside and only people within their household or support bubble could meet inside.

On Tuesday, April 12, police confirmed that Prime Minister Boris Johnson and Chancellor Rishi Sunak will be fined for breaking lockdown laws. As per BBC News, the decision was taken following a Met investigation into a series of alleged lockdown parties that took place in Whitehall and Downing Street.

Johnson and Sunak’s penalties were two of 50 fines handed out by police on April 12, including to the Prime Minister’s wife, Carrie Johnson.

As ITV reported, Downing Street also confirmed that the Prime Minister and Sunak’s police fine was in relation to attending a birthday party held in the Cabinet Room on June 19, 2020.

The leader of the opposition, Sir Keir Starmer, reacted to the news by calling for the Prime Minister’s resignation. “Boris Johnson and Rishi Sunak have broken the law and repeatedly lied to the British public. They must both resign. The Conservatives are totally unfit to govern. Britain deserves better,” the Labour leader said in a statement.

Elsewhere, a spokeswoman for the COVID Bereaved Families, Lobby Akinnola, said it was “unbelievably painful” to know that senior members of the Conservative Government “took us all for mugs.”

“The fact that the prime minister and his chancellor then lied about it, and would have continued to do so if the police hadn't intervened, is truly shameless,” Akinnola added.

Members of Johnson and Sunak’s own party have also publicly responded to the police findings, including tory backbencher Darren Henry, who urged the Prime Minister to issue a “public apology.”

Boris Johnson will now face a parliamentary investigation after MPs supported a Labour-led motion that called for the privileges committee to investigate allegations that Boris Johnson misled the House of Commons when he denied breaking lockdown rules.

As per Sky News, the Labour-led motion that was nodded through by MPs accuses the Prime Minister of making four separate comments in the House of Commons that “appear to amount to misleading the House.”

The investigation will not take place until after the Scotland Yard inquiry into Downing Street lockdown parties has concluded.

Bustle has reached out to Downing Street for comment on the matter.

May 23, 2022: Photos Emerge Of Boris Johnson At Downing Street Party During Lockdown

After stating in the House of Commons that all lockdown rules were adhered to in Downing Street, and claiming that he was unaware of any alleged law-breaking parties, ITV released photographs that show Prime Minister Boris Johnson attending a No. 10 leaving party on Nov. 13, 2021.

The party in question was thrown in honour of the former Downing Street Director of Communications, Lee Cain, and the damning leaked photos show Johnson raising a glass while standing beside a table of party food and bottles of alcohol.

A week before the party took place, strict lockdown rules had been reintroduced across England due to rising COVID-19 cases. The rules permitted just two people from different households to mix indoors.

On Monday, June 6, it was announced that Prime Minister Boris Johnson would face a leadership challenge after the chairman of the 1922 Committee, Sir Graham Brady, confirmed that at least 15% of Conservative MPs had submitted letters of no confidence.

Johnson subsequently won the vote of no confidence with a total of 211 Tory MPs voting in favour of the Prime Minister and 148 MPs voting against him. The Tory leader stated that his victory was “decisive,” claiming that the result provides an “opportunity to put behind us all the stuff that the media goes on about.” The Prime Minister is now immune from a leadership challenge for a year.

Despite surviving the vote of no confidence, many political figures and pundits have stated that the Prime Minister’s authority has taken a significant blow.

The leader of the Labour Party, Sir Keir Starmer, accused the “divided” Conservative Party of “propping up” Johnson, while Liberal Democrat leader, Sir Ed Davey, said the Prime Minister's reputation is in “tatters” and his “authority is now totally shot.”

On June 23, the Conservative party hoped to retain their seats in Wakefield, West Yorkshire, and Tiverton and Honiton, Devon, in a double by-election. On the morning of June 24, it was confirmed that Labour had retook the seat of Wakefield, and the Liberal Democrats and taken the usually safe Tory seat in Tiverton and Honito with a significant swing.

In spite of his party’s electoral disappointment, Prime Minister Boris Johnson vowed to “keep going.” However, the by-election results prompted the Conservative party co-chair, Oliver Dowden, to step down from his role.

In a letter to Johnson confirming his resignation, Dowden said the party “cannot carry on with business as usual.” He continued, “Somebody must take responsibility and I have concluded that, in these circumstances, it would not be right for me to remain in office.”

Meanwhile, Labour leader Sir Keir Starmer said the by-election results show that the Tories are “imploding,” adding, “they are out of touch and out of ideas.”

This article was originally published on Jan. 12, 2022