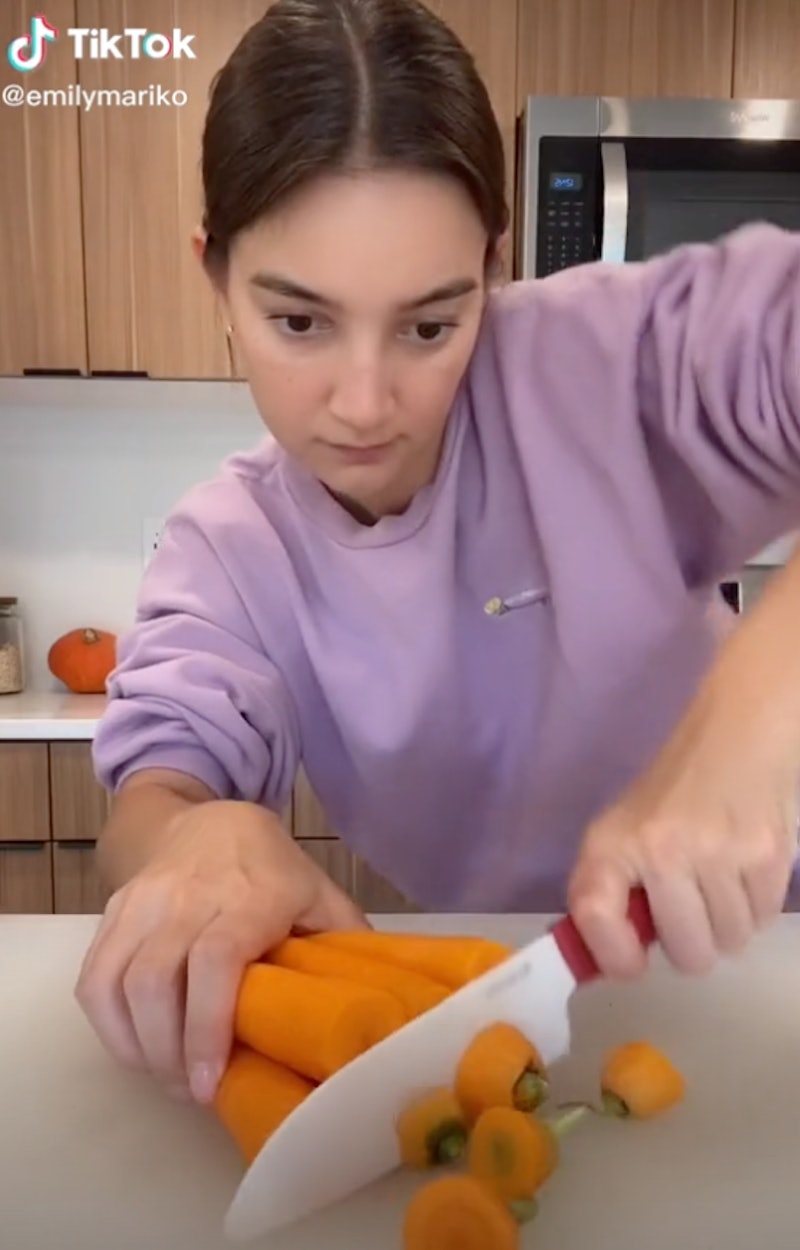 Some people choose wine or bath bombs to unwind after a stressful day. Some cook themselves a nourishing meal. Others turn to a classic For You Page scroll. And still others seek out a combination of all three — soothing food TikTok accounts, where videos of meals being rhythmically chopped and prepped move the clips into ASMR territory.

Though much of the app will keep you up at night, this trend has the potential to hypnotize you to sleep — or at least, give you some ideas for what to make for lunch tomorrow. ASMR stands for autonomous sensory meridian response, and it’s that calm, almost tingly feeling you get while listening to someone whisper or brush hair — or prepare a perfect bolognese sauce. While lots of #Food Tok videos feature combos like story time and bell pepper sandwiches, or indie music and a smoothie bowl, a small section of the foodverse is decidedly quieter. There, you can watch chefs prepare complicated dishes while getting those classic ASMR tingles.

Videos tagged #ASMRfood have over 4.5 billion views. Posts start in silence that’s cut through with the satisfying chop of a knife tearing through a stick stack of crisp cabbage, or chicken thighs being prepared to the tune of only parchment paper being rustled. The kitchens are clean. The ingredients are neatly organized. Every shot is intentional. The vibe, as the kids say, is immaculate. You don’t have to be a brain tingle-chaser to appreciate the sensory delight that is ASMR Food TikTok. Here are 11 accounts to follow:

The reigning queen of your For You Page shares videos that are appetizing, educational, and such a joy to listen to. Emily Mariko is masterful at connecting various sounds like boiling, plastic crinkling, dicing, and splashing in seamless short cuts.

Lindsey prepares everything from soup to salmon, and films the process with quick cuts and a lot of crunch. Her audio picks up the grind of a pepper mill, the glug of olive oil, and the flaking of crust. Sometimes she pairs her recipes with classical music, other times she leaves the ingredients to sing for themselves — but she never talks, other than to say the name of the dish.

If you’re not concerned with learning a new recipe and can settle for some brain tingles and epic #sostatisfying vibes, this account will light up your senses. Edwards plays with single ingredients in extreme temperatures, like slicing a frozen blueberry with a razor, or cooking a fish in slow motion. His videos are mesmerizing and clinical, if that’s your thing.

“Let’s do some cooking,” Sam Way starts off each video. What comes next is a vast array of euphoric kitchen sounds, like a clank of a pot, the spin of a cap, the unraveling of tin foil. His videos are so fast and tightly edited, they will trick you into believing you can cook a pasta meal from scratch in 30 seconds.

This account is literally all popcorn. It’s made in a wok, sometimes still attached to the cob, always doused in oil, and sigh salt or sugar, eggs or candy mixed right in. The combination of metal scraping and banging mixed with the light flutter of popping corn is a real ear treat.

Chef Melissa — yes, she of the tiny cupcakes — has some surprise savory knife skills, and can make prepping a cabbage salad as hypnotic as a lullaby. Watch her slice through brightly colored farmer’s market bounty and crunch her way through perfectly chopped bites. It’s as appetizing as it is relaxing.

There’s nothing sad about this tattooed chef who whips together bougie restaurant meals while wearing a backwards hat. When he speaks, it’s softly, and when he chops, his inked-up hands do an elegant and fluid dance. His soothing presence makes difficult dishes seem accessible and his kitchen sounds are perfectly clanky.

The Self-proclaimed King of Crunch does a lot of satisfying chomping on his page. In his videos he tests out new menu items at fast food restaurants, accepts food challenges, like Burger King all day, or Korean food only, as submitted by his fans. While he doesn’t do his own cooking, it’s enjoyable to watch and listen to him eat his way across the world.

@Elenamdin doesn’t talk in her videos, which feature her baking various comfort foods like stuffed bread and gnocchi, but she sets them to music which makes her technique look like a dance. She kneads, rolls, whisks and mixes to the tune of various mellow tunes which creates a serious calming effect.

You didn’t know you needed to listen to videos of candy being cut until you’re on Candy Tok, and then there’s really no turning back. Enjoy this Australian hard candy company’s oddly satisfying videos of confections being stretched, snipped, and cut to shape.

While you won’t find much cooking or chewing on this account, you will find a delightful assortment of food organization videos that are crinkly and stabilizing. The world might be on fire, but this woman’s and fridge is in such perfect order, you can get some sleep tonight.

More like this
TikTok's Butter Board Might Be The New Cheese Plate
By Emma Carey
On TikTok, Tinned Fish Date Night Is The Latest Viral Food Obsession
By Emma Carey
This TikTok Song About An Unrequited Romance Has FYPs In Shambles
By Emma Carey
Why Everyone Is "Soft Tagging" Friends On Instagram Right Now
By Alexis Morillo
Get Even More From Bustle — Sign Up For The Newsletter