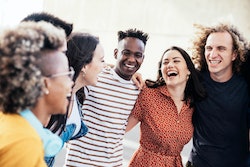 Some people have the ability to walk into any room full of strangers and leave with three new best friends. They’re always introducing themselves to the person next to them line, they get along with pretty much everyone they meet, and they just seem so confident. If you’ve ever wondered what’s their secret to being such a people person, the answer may be in their birth chart. According to astrologer Clarisse Monahan, the friendliest zodiac signs are determined by their ruling sign, modality and element. “All three contribute to your temperament,” Monahan says.

If you were to only look at elements, a general rule is that fire and air signs tend to be the more extroverted and open. “Due to their outward directed energy, they come across as pretty friendly,” Monahan says. “It doesn't necessarily mean they’re nicer, but they definitely come across, at least initially, as more approachable and affable than earth and water signs.”

A zodiac sign’s modality, which is how a sign expresses itself, can also play a role in how friendly they’re likely to be. According to Monahan, mutable signs (Gemini, Sagittarius, Pisces, and Virgo) are the most adaptable and therefore, the easiest to connect with. “They leave their judgments at the door and are open to all other perspectives, and their chameleon-like nature means they can adapt to the people around in order to make the energy harmonious,” she says. Because of this, they tend to build relationships quickly.

Finally, a sign’s ruling planet can also determine what their personality is like. Signs that are ruled by the Benefics (Venus and Jupiter) are going to come across in a more social and open way. “Venus wants to connect and is the social glue that brings us all together, while the great benefic, Jupiter, also wants to connect and build deeper, expansive relationships,” Monahan says.

If you take those three factors into consideration, these are the three friendliest signs in the zodiac.

More like this
3 Zodiac Signs Most Likely To Be The Center Of Attention
By Nina Kahn
The 3 Most Family-Oriented Zodiac Signs, According To An Astrologer
By Nina Kahn
Here’s Why Sagittarians Should Pursue A Career In Academia
By Nina Kahn
These 4 Signs Are The Seductive Sirens Of The Zodiac
By Brittany Beringer
Get Even More From Bustle — Sign Up For The Newsletter