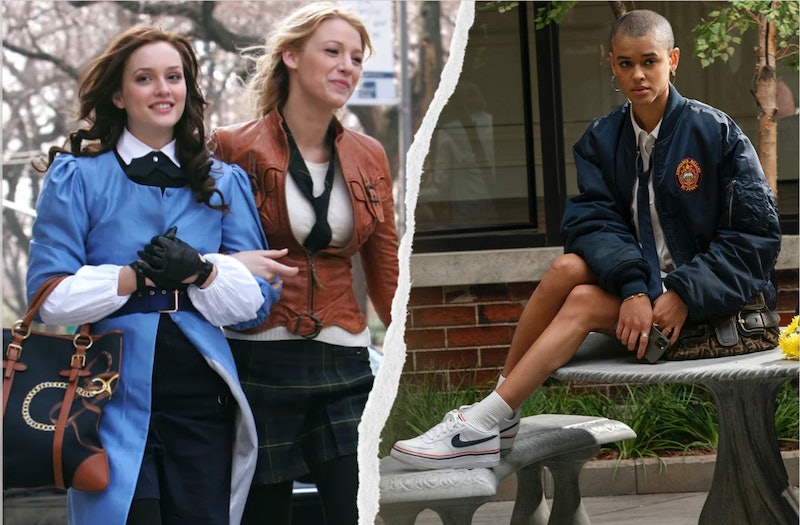 Well, well, well. If it isn’t our loyal Bustle reader spotted in the hottest Gossip Girl Halloween costume at the party...

Since Gossip Girl first hit our screens in 2007, the only thing more iconic than its non-stop drama and couple fandoms was its fashion. The preppy chic of Upper East Siders Blair Waldorf and Serena van der Woodsen was immediately coveted by fans everywhere — and the show most certainly had an impact upon late 2000s and 2010s fashion. Come Halloween, you were almost certain to run into a few lookalikes of Manhattan’s elite no matter where you lived in the country.

Now, as the series’s latest reboot hits the scene with a brand-new style (and an all-new cast), Gossip Girl costumes have once again become the “it girl” for fan imitations. And, with Halloween just around the corner, your chance to cosplay as your favs has finally returned.

Whether you’re an original Gossip Girl purist, part of the next generation of fans, or somewhere in the middle, there are plenty of show-stopping looks from both iterations for you to choose from. Keep it classic with a Blair and Chuck couple costume, embrace your inner main character with a Julien Calloway-inspired outfit, or keep people on their toes by dressing as Kate Keller.

However you choose to dress, just prepare for some inevitable original-versus-reboot discourse sparked by your costume. (Chances are, if you’re a Gossip Girl fan, you’ll love stirring up some drama anyways.) XOXO.

If you’re looking to release your inner “It Girl” this Halloween, you can dress as Gossip Girl’s Serena van der Woodsen. Wear a white button down, skirt, and tie to capture Serena’s Constance Billard costume. Grab your bestie to dress as Blair, or your beau to dress as Dan.

Crown yourself Queen Bee by dressing as Blair Waldorf this year. Blair loves to spice up her Constance uniform, so get innovative by accessorizing your costume with Blair’s signature headbands and ties.

The boys of St. Jude’s are a bit less creative with their daily wardrobe than Serena and Blair. (Save for Chuck, whose flamboyant accessory choices make him the most stylish of the Gossip Girl guys.) To differentiate between Chuck, Nate, and Dan, focus on their man differences. Chuck loves to layer his uniform with his memorable chunky scarf. Nate keeps things casual with untucked clothes, unbuttoned shirts, loose ties, and shaggy hair. Dan keeps things polished with a tight tie, fully buttoned and tucked shirt, and a messenger bag.

Julien Calloway may be an Instagram influencer in the new reboot, but she’s also a style influencer. Julien loves taking an edgy spin on her uniform, so consider taking after the tastemaker with a look like her Oxford button down paired with biker shorts and knee-high boots.

Zoya is one to keep on the outskirts of drama — unless she’s penning it herself in her writing. If you’re more low-key yourself, you may relate to Julien’s little half-sister Zoya. Zoya keeps things coy with her style, often adding subtle accessories like a cute headband.

Known as the “Prince of New York,” Obie is the wealthiest character on Gossip Girl — though he loathes his family’s status. This conflict shines through in his style, as he tries to play up his down-to-earth intentions while dressed in presumably expensive clothing.

Max Wolfe is very aware of his own appeal, and isn’t afraid to show it off in his style. Even in his uniform, he gets playful — wearing an undone tie around his neck. Emulate his playboy attire by layering a cable knit v-neck over a button down with a loose bow tie.

Unlike many of the trend-setting characters on the Gossip Girl reboot, Audrey’s style airs on the side of tradition. If you’re looking to stick the the more straight-edge preppy roots of the original Gossip Girl, Audrey is the perfect in-between with her long-tailed bowties and button-downs.

Despite his edgy skater boy exterior, Aki Menzies is known as the most innocent of the scandalous Gossip Girl circle. Aki does, of course, have his own flairs of rebellion — which is perfectly captured through his small hints of risk-taking in his pink hair and singular dangly earring. Throw on some baggy khakis, skate shoes, and a hoodie over Aki’s school button-down and tie, and finish the look with some hair dye and an earring.

While Kate Keller would likely be considered stylish at the time of the original Gossip Girl, the English teacher borders on cheugy in the eyes of her Gen Z students. To emulate her teacher chic, wear some wide-leg jeans with a blazer and tie the look together with a cute silk scarf.