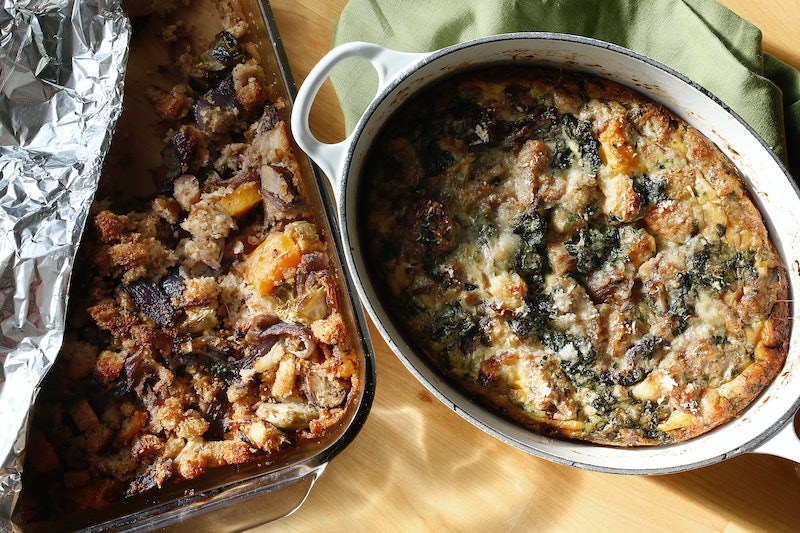 When it comes to Thanksgiving dinner, my mother's stuffing is the one food item on the table that I most look forward to eating every single year, and when it comes to leftover Thanksgiving sandwiches, it's that same stuffing that seals the deal for me. So how long does leftover stuffing last? It's an important question if you like devouring Turkey Day leftovers as much as I do come the Friday, Saturday, and Sunday after Thanksgiving.

Before you start layering your leftover stuffing onto the turkey, gravy, and cranberry sandwich you're in the middle of making, you want to be sure you're not going to be eating something that will make you sick. Essentially, heat kills bacteria, and freezing temperatures kill bacteria, so if your food spends any time in between those two extremes, you should know what you're working with (especially considering the fact that stuffing is often cooked inside of the turkey, making it more prone to bacteria than foods on the Thanksgiving table that don't touch meat).

You're going to be doing a lot of cooking and a lot of eating this November 24, so make sure you brush up on your leftover knowledge below, especially when it comes to the stuffing because really, what other day of the year do you eat stuffing that's been cooked inside of a giant turkey?

How Long Does Leftover Stuffing Last?

According to Marissa Dankosky, RDN, a New Jersey-based registered dietician nutritionist, leftover stuffing only lasts three or four days in the fridge once it's been made. If you want to have it last a little longer, you can freeze it instead. You want to be sure to refrigerate your leftover stuffing within two hours of having cooked it and your refrigerator should be 40 degrees Fahrenheit or below for safe food storage.

How Should You Store Leftover Stuffing?

Like many of your Thanksgiving leftovers (and really, any and all cooked foods), Dankosky recommends storing your food in a sealed, preferably airtight, container in the refrigerator.

How Do You Know When Stuffing Has Gone Bad?

The simplest way to tell if your stuffing has gone bad is to sniff it and see if the appearance looks off. “You will know if your stuffing has gone bad if it has a bad odor or there is visible mold growing on it,” Dankosky advises. “It may also taste unpleasant, have a slimy film, or mushy appearance. Bacteria may grow that is not visible to the eye but can cause food-borne illness.” To play it safe, toss your stuffing after four days in the fridge. After all, you can always make more later if you have the ingredients on hand.

More like this
Dunkin’s Valentine’s Day Lineup Includes A Drink That Tastes Like Dessert
By Alexis Morillo
12 Aphrodisiac Desserts To Spice Up Your Valentine’s Day
By Kaitlyn Wylde
15 Black-Owned Liquor & Wine Brands To Add To Your Bar Cart
By Alexis Morillo
21 Galentine’s Day Memes To Celebrate Your Best Friends
By Meghan Bassett and Mia Mercado
Get Even More From Bustle — Sign Up For The Newsletter
From hair trends to relationship advice, our daily newsletter has everything you need to sound like a person who’s on TikTok, even if you aren’t.

This article was originally published on November 24, 2016