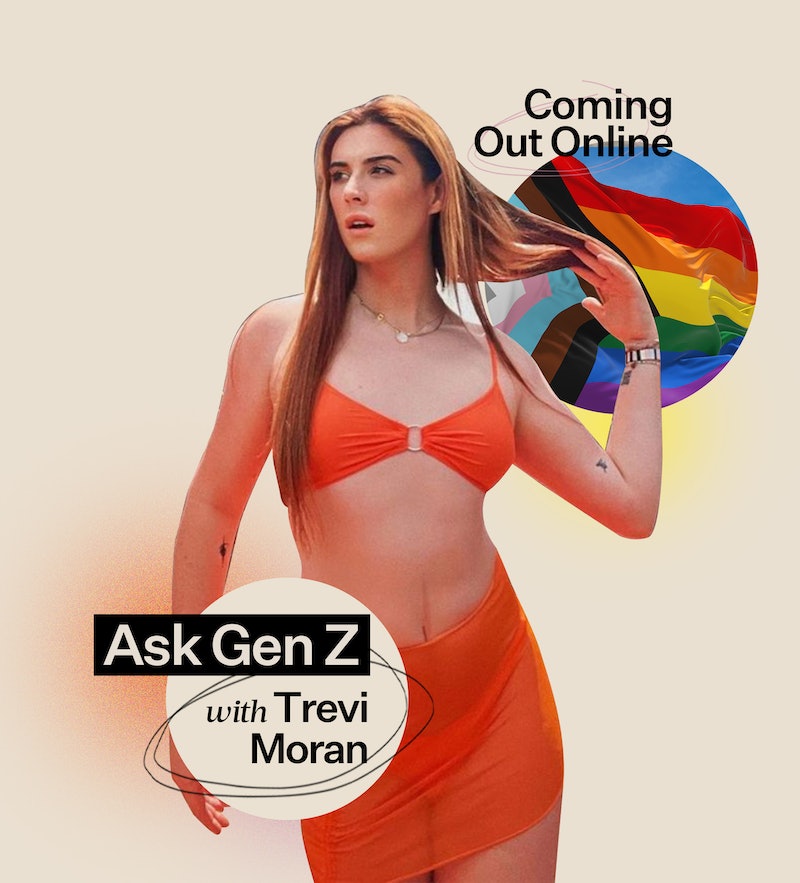 Trevi Moran has been on YouTube since she was 11 years old. Her viral videos landed her a spot on The X Factor and in one of YouTube's first content houses back in 2012, and she’s since released over a dozen singles and EPs. On top of helping her build her career, though, her platform has also helped Moran affirm her identity: She came out as gay on YouTube in 2015, then as transgender in 2020.

Having come out online twice, Moran has learned a lot about making personal information public — and the positive impact doing so can have. The New York-based 23-year-old recently partnered with YouTube to fundraise for The Trevor Project, a national LGBTQ+ youth mental health organization, and is working on new music about finding sobriety. “It's such an unspoken issue within the LGBTQ community, the mental health stuff that we have to go through,” she tells Bustle.

Though Moran notes that coming out online as a public figure — she has 1.4 million followers on Instagram alone — is going to be different from most people’s experience, she stresses that it’s been well worth it. “There’s honestly no better feeling than knowing you’re living the best version of yourself and not caring who’s judging,” she says.

Here, Moran shares her best advice for coming out online.

I’d love to hear about the process of deciding to come out, then to do so online.

When I came out, it was such a relief. Once you have the family and friends part out of the way, you build confidence. I realized that [being out] was something that I had mentally worked for, that I took pride in. [Sharing my identity] was a huge core change, not only for me, but for everyone around me to experience.

As far as coming out as gay online, the video was kind of playful because I've always acted very feminine and people had always assumed. But the second time, I was more emotional, because it was what I had really wanted to do in the first video. [When I came out as trans], I was planning on doing a whole video shoot with lights and music, making it this really big deal. But then I had a panic attack on my couch. I thought, I can't live like this any f*cking longer. So I put on a shirt, brushed my hair, clicked record, and uploaded the first take within 30 minutes. I was like, I can do all that flashy sh*t later. But this is for me. This is to make me feel like I am the truest version of myself.

Is there anything you would have done differently in the video?

I wish I’d added a bit more of a push to help anyone struggling with coming out. There are a lot of situations where people can’t come out, but you can help motivate other queer people to live their life to the f*cking fullest. But honestly, after thinking about it, I don't think I would change anything about it. Sometimes those spur-of-the-moment decisions can turn out to have beautiful outcomes.

Did you get any comments on your videos or messages that surprised you?

I have gotten a lot of DMs from people saying that they've been waiting to [come out] since they were 8 years old, and my video gave them the courage to finally do it. I’m also open about my sobriety, and I get messages from people saying, “I just started three days ago, and you're just keeping me sober today.” I know that substance use is a different topic than Pride. But it does run in our community, with the trauma that we've experienced growing up or getting bullied, and it’s important to talk about.

As for hate comments and stuff like that, that’s a different world. You can either filter them out, or you can laugh at them. My favorite thing is laughing at them.

Do you have any tips for filming a coming-out video, or what to say?

I'm not a very scripted person. If it's a bad take, you can re-record or edit it. I think it's best to share what your experiences have been — not only how euphoric and beautiful it is to be open and express yourself, but the struggles, too. Spill your heart to the camera and be the most authentic version of you, because you deserve to be that.

What about adding things like a caption or hashtags?

There are no rules to this. If you feel comfortable and confident in what you're doing, explain it in the caption of a photo, or a poem, or a song — I released a song when I came out as gay. As long as you feel safe enough to do it, go for it. Literally f*ck the rules.