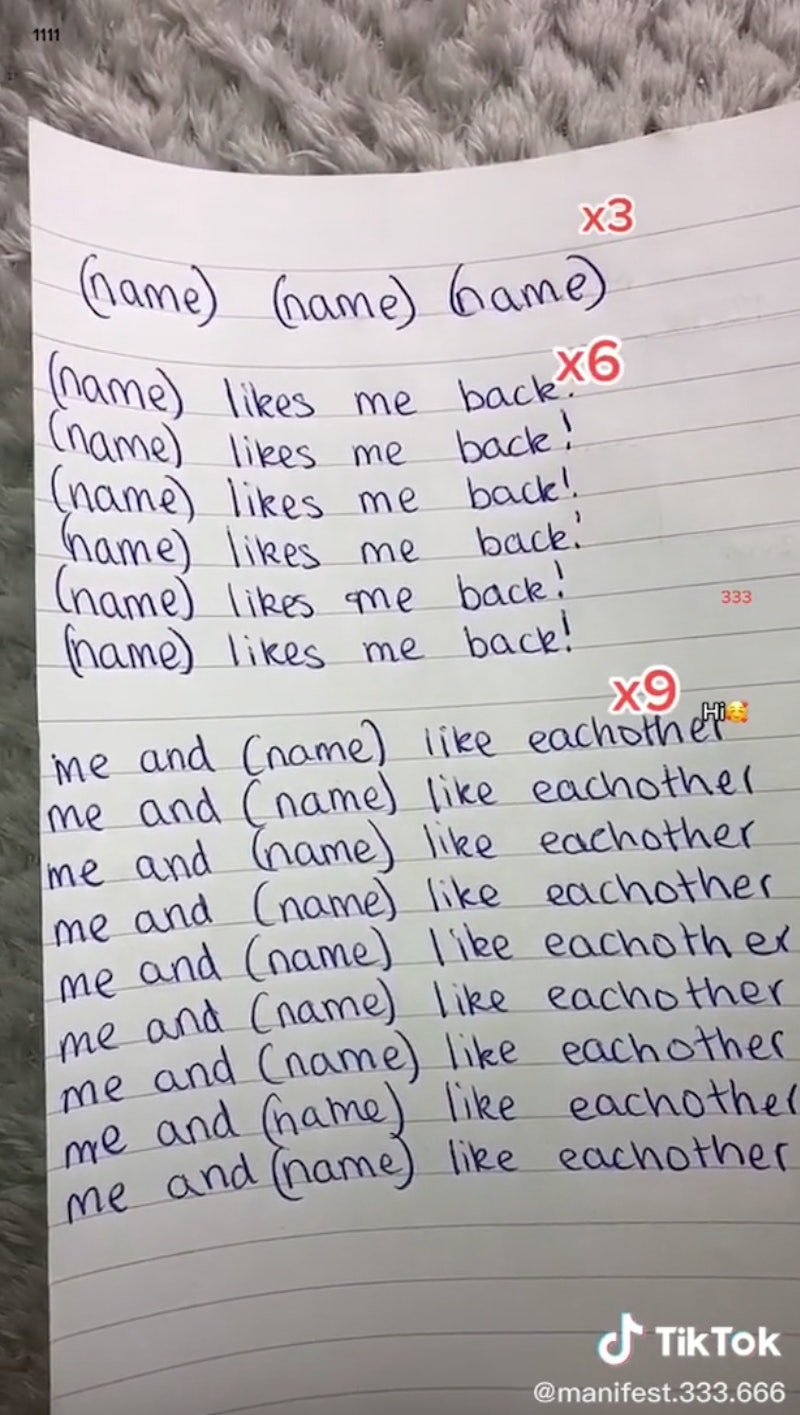 If you ask TikTok, anything you could ever want to happen in your life is possible if you simply believe — a process known as manifesting. Whether you want your ex to come crawling back with an apology text or a new job that perfectly aligns with your big goals, there’s no shortage of journal prompts or manifestation methods for you to try. But one that’s been pretty popular among TikTok is the 369 method. In fact, videos with the hashtag #369method have over 214 million views, with numerous TikTokers saying it really does work. If you want to try the method out for yourself, experts share everything you need to know to successfully manifest your goals.

“The 369 manifestation method is a form of scripting magic, also known as flash and thunder or chaos magic, meaning that it harnesses and amplifies energy for speedy manifestation but is not pinned to this reality by representations of the elements,” spiritual advisor Alane Hathaway tells Bustle. “It’s been made popular by TikTok for its speedy results and it’s one form of manifestation that’s used for things like drawing in quick cash or trying to influence a romantic interest to text or contact you.”

Manifestation is all about using your energy to attract the things you want, whether that be a raise or a bigger apartment. You can do it anytime, anywhere. You also don’t need any tools to manifest — meditating on your desires is one effective technique. But for the 369 manifestation method, you’ll need paper and a pen as it involves repeatedly writing down the specific thing you want to attract.

Many people have posted videos saying this method works to manifest texts, reunions with old friends, or money, while numerous others have commented with their own success stories. Here’s what you need to know to successfully manifest your dreams using the 369 manifestation method.

In order to do the 369 manifestation method, you’ll need a journal or a piece of paper and a pen. Some like to use certain colored pens to help better attract the things they want. For instance, some use blue pens to manifest contact with a long lost ex, some will use red to attract a new romantic partner, while others may use green for money goals.

To keep it really simple, think about a specific goal you have in mind. Write a single-word distillation of that goal down three times. If your goal is to get your ex back, for example, write their name down three times; if you want to manifest a new job, write down your dream title three times. Then, write the goal down as if you’ve already attained it six times. This is your “intention.” For example, “I have the job of my dreams” or “[My ex] and I have a date.” Finally, write down the “action,” or a statement describing the manifestation was achieved as if it already happened, nine times. You could say, “[My ex] reached out and wants to see me,” or “I applied to the job and earned it after two interviews.”

Another way to implement the 369 manifesting method is to write your goal down three times in the morning, six times again in the afternoon, and nine times before you go to bed. If it helps to get a clearer vision in your mind of the thing you want to attract, you can be a lot more specific — for example, “My ex reached out to me with a long, heartfelt text and now we’re having coffee next week.” It’s a method you can easily incorporate into your daily routine, and it doesn’t take up a lot of time either.

Intuitive healer Melissa McKenna, MSW, ASW tells Bustle that the 369 method is meant to “create consistent attention on our goals, aligning our focus with our target, and bringing the opportunities leading to our goal to light.” All you need is sustained focus on your goals in order to manifest them.

Why The 369 Method Works

Like other manifestation methods that require you to write down the same intention or affirmation over and over again, the big goal here is to help you focus on that one thing you want to attract. It also forces you to visualize the ways in which your goal will be attained, allowing you to pay attention to opportunities to do so as they come up.

To make the most of the method, McKenna recommends being in a state of gratitude while you’re writing your intentions down. If you have a positive mindset, it’s easier for you to visualize and really feel what it’s like to have what you desire. That’s basically what the 369 manifestation method is all about.

“Spending several minutes in meditation after this practice each time works wonders and can really shift things quickly,” McKenna says. “Also, be alert for opportunities that match the feeling of having your goal met and watch your manifestations appear as you follow them. We can only receive what we are truly open to.”

More like this
On TikTok, #SeñoraEra Shows Latinx Users Becoming Their Mothers
By Natalia Perez-Gonzalez
TikTok Is In Its Elle Woods Era
By Meguire Hennes
I Tried The $20 TikTok Viral Oishii Strawberries — Here's What I Thought
By Sophie Hanson
4 Zodiac Signs Most Affected By The August 2022 New Moon
By Brittany Beringer
Get Even More From Bustle — Sign Up For The Newsletter