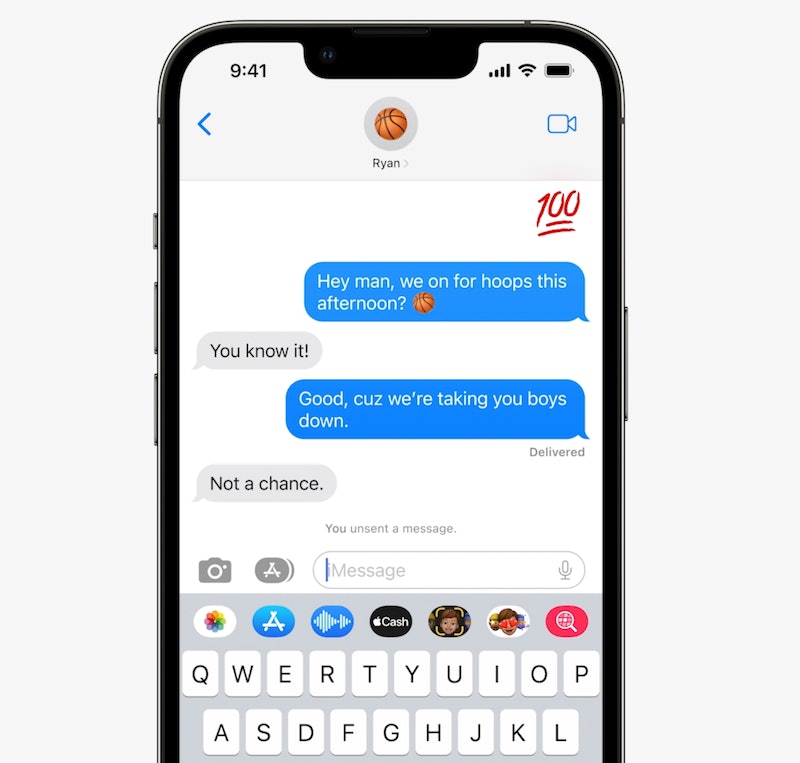 Your Messages app is likely the center of activity on your iPhone, fielding incoming texts from family, friends, colleagues, and more. But aside from muting that 20-plus-person bridesmaid group chat, having more control over your texts can sometimes feel like a pipe dream.

At Apple’s Worldwide Developers Conference (WWDC) on June 6, the company announced some major new features to Messages. In iOS 16, coming out in the fall, you’ll be able to edit and unsend iMessages you’ve recently sent out. You’ll also be able to mark a thread as unread — a gift to those among us who open text messages, put their phone down, and forget to respond for the next six to eight weeks. This update will come out as part of iOS 16, which won’t be available to the public until likely September.

How To Edit Or Unsend iMessages In iOS 16

To unsend a message, all you have to do is long press on the message in question, the way you add a reaction. Choose “Undo Send,” second from the top on the list of options. Your message will disappear with an exploding graphic, and you can watch that embarrassing text you meant to send your mom vanish before your eyes. According to a press release from June 6, users will only be able to unsend messages for up to two minutes after sending. So if you want to Ctrl+Z that profession of love, you’ll need to act swiftly.

To edit a message, you’ll also need to hold down on the message. Then, select “Edit” from the dropdown menu and adjust your message as needed. You’ll only be able to edit a message up to five times, and can make edits up to 15 minutes after sending a message. The recipient will also be able to read the editing history of your message, so you should still try to make your first drafts of texts legible (and appropriate) enough to send without edits.

Per Apple’s newsroom post about the announcement, you can also recover deleted messages for up to 30 days in iOS 16. To mark a conversation thread as unread, just swipe right on it and tap, the same way you would mark an email thread as unread in the Mail app.

Think of the possibilities. You’ll be able to edit that awkward typo in your first text to a new datefriend (“Brain” is not a cute nickname for Brian!), or unsend that passive-aggressive note to your roommate. Though many of these faux pas could be prevented by simply reading the text over a second time, these new features will smooth over many avoidable awkward situations for the clumsy-thumbed among us.

Will You Be Notified If Someone Edits Or Unsends A Message?

If the ability to edit or unsend messages feels a little red-flag-y for you — cue “Toxic” by Britney Spears — rest assured that your conversation stream will note when a text has been edited or recalled. While you won’t be able to tell what exactly was in the chaotic missive your BFF decided against sending, there will be a virtual paper trail. And, with a full record of edits made to messages, you can call them out if they conveniently edit out the part of their hot take dissertation that was incorrect. Users can only edit messages for up to 15 minutes after it initially goes out, and can only unsend messages for up to 2 minutes after sending.

These changes to Messages were announced alongside other new options in iOS 16, like editable fonts and colors for your lock screen. There’s little doubt the future of the iPhone will be customizable.

This article was originally published on June 6, 2022