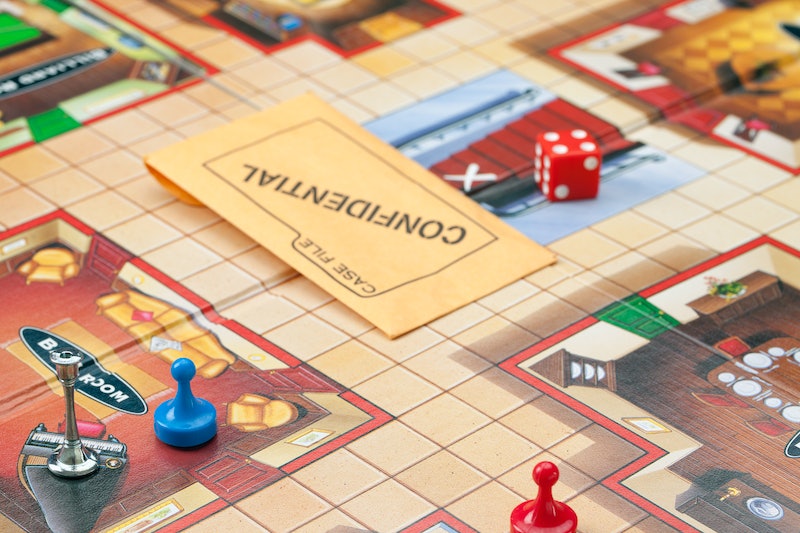 Everybody loves a little murder mystery to spice up a boring night, which is why Clue has been a hugely popular board game since the 1940s. But unlike many board games, the murder mystery format translates well to Zoom. Luckily, playing Clue online with the help of Zoom is easy.

If you've never played before (or seen Knives Out), the rules of Clue are fairly simple. A murder has taken place in a mansion with many decadent rooms, and it's your job to figure out who did it, where, and with what weapon. Miss Scarlett, Colonel Mustard, or Professor Plum? Lead pipe, revolver, or wrench? The right combination is hidden in a secret envelope.

It's your job to move around the mansion, throwing dice to see how far you can move on your turn. Each player enters rooms that might be settings for the crime, and makes suggestions about what happened. You have three cards in your own hand that rule things out — if you have the dagger card, for instance, it can't be in the secret envelope. You can show these cards to other players to prove their theories wrong. The goal is to collect enough information, and rule out enough possibilities, to make a final accusation, usually as dramatically as possible. If you get it wrong, you lose.

Like many board games, you can't use Clue's physical set to play remotely — which is a shame, because those tiny daggers are adorable. But there's a good alternative: going online to investigate Mr. Boddy's murder in the glorious Tudor Mansion. So how do you make it work remotely?

There's one free version of Clue on ArcadeSpot, but it doesn't allow multiple players in various locations to play a game together, so it's only useful if you're playing at home by yourself. Otherwise, you'll want to invest in Hasbro's Clue app, which is $3.99 on the Apple Store and Google Play, and $11.99 on Steam. It can be played on your Nintendo Switch, too.

As with many online multiplayer games, you can choose to be matched up with strangers — up to five others — or coordinate with your mates to play a game with them. It's an intuitive playing experience that follows the lines of the board game very closely. The players are arranged at the top of your screen, and every guess and move is played out on the onscreen board. The Clue Sheet updates automatically as various tidbits are revealed, but you'll need to keep notes on the in-game notepad too, as it doesn't record what cards you've showed to whom.

The downside of the Clue app is that, while it features some pretty amazing audio, like the crack of revolvers and dramatic gasps, it doesn't include video or a chat to communicate with other players. But it's very easy to run Zoom alongside, so you can see everybody's faces and make those super-dramatic pronouncements with verve. (Bonus points if you coordinate your Zoom backgrounds and dress up.)

If the conventional Clue setup is boring to you, Hasbro also has an online Clue Season Pass that includes 10 new boards, including a Victorian London setting with Sherlock Holmes and Watson, Old Hollywood, the Wild West, an ice palace, and an Agatha Christie-style Egyptian dig site. While these options all include new characters and art, the dynamics of the game remain identical, with no new rules. It's a lot of content, but it's also $34.99, so it may only be for serious Clue fanatics.