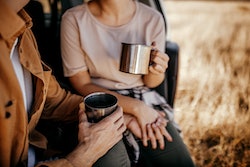 The year is 2012. You’re celebrating your new college relationship by changing your Facebook profile picture to a party snap of the two of you — arms slung around each other, eyes bleary, smiles boozy. You get 131 likes and 18 comments about your official coupledom. A decade later, your social life is reflected in a collection of squares and slides on Instagram, but your love life is not so easy to discern. A quick glance at an average Gen Z or Millennial’s profile won’t reveal much about their relationship status. The days of in-your-face coupledom are over: A relationship soft launch on Instagram is the new Facebook official.

A soft launch is defined as a vague reveal that you’re in a relationship — a story post of your datefriend’s “elbow and side profile only,” as comedian Rachel Sennott put it. (“No tag of course,” comedian Catherine Cohen followed up in a reply.) You might recognize it on Instagram or TikTok video with a mysteriously affectionate caption, a blink-and-you’ll-miss-it Boomerang, or photos of someone across a table with the face cropped out of frame. Sometimes it’s just an Instagram story of a disembodied hand on the poster’s thigh while driving, or a shadow walking alongside the poster.

“The art of a soft launch is a fragile one,” creator Victoria Paris, 22, tells Bustle, admitting she herself has not mastered it. In March, Victoria debuted a girlfriend she had been dating for three months in a series of since-deleted TikToks and Instagram Stories. Shortly after the soft launch, the couple broke up, addressing it first in comments, and then more officially by wiping each other clean off the grid. She isn’t sure she’ll put her next relationship online at all.

Part of the reason Gen Z is timid about putting love on the internet, according to the newly single creator, is because of the embarrassment endured if the relationship ends. “Dating in your 20s is hard enough, but then bringing it online is a whole other mess,” Victoria says. According to a Pew Research Center survey conducted in 2019, only 48% of users under 30 reported sharing their relationship status on social media.

A soft launch, at least, offers both members of a couple plausible deniability: If the relationship ends, at least a face didn’t make it to the grid. When you’re ready to commit to a hint of commitment, here’s everything to know about how to soft launch a relationship on Instagram.

According to Ashley, “A little sprinkle of evidence early on can be a fun way to flirt, and tease the relationship,” but carrying on the mystery for too long is just confusing for everyone following along. “I’ve noticed a lot of people play the long game of posting little snippets of holding hands or a dinner date, but no face reveal,” Victoria tells Bustle. “I prefer to date in silence for a bit then come out with a bang — a sick photo or video together.”

The right timing to move into a hard launch — or a photo that obviously shows that you and your new S.O. are an item — will vary with each couple, but should depend on if the relationship feels solid. Consider having a straightforward conversation where you’ve both agree to share your relationship online.

A good soft launch is, at its core, subtle. Posting evidence, however scant, of a relationship on Instagram shouldn’t be too different from your regular feed pics. “If this person is very much in your life, include them in posts here and there, without any major declarations, just to let people know what your life is like,” Ashley says.

Then, there’s the question of how to caption it. “Gushy declarations are over,” Victoria tells Bustle. “Unless you’re at the Kardashian level of gush, covering the first floor of your partner’s home in roses, it’s best to keep it low-key to reduce pressure from outside parties.”

“The point of the soft launch isn’t to let that person know how you feel — that should be a private conversation offline,” Ashley adds. “Instead, including them in your Instagram should be just to accurately reflect your life.” Read: Posed, shoulder-to-shoulder snaps with overly sentimental captions are out. Candid shots that reflect what the relationship actually looks like are in.

And if the soft launch doesn’t land? While the Millennial way of breaking up might have been to change your relationship status to single, or make a direct post about the relationship ending, Victoria says Gen Z does things differently. “Delete every post that they’re in and act like the relationship didn’t happen. Then when the dust settles, you make a video making fun of your trauma.”