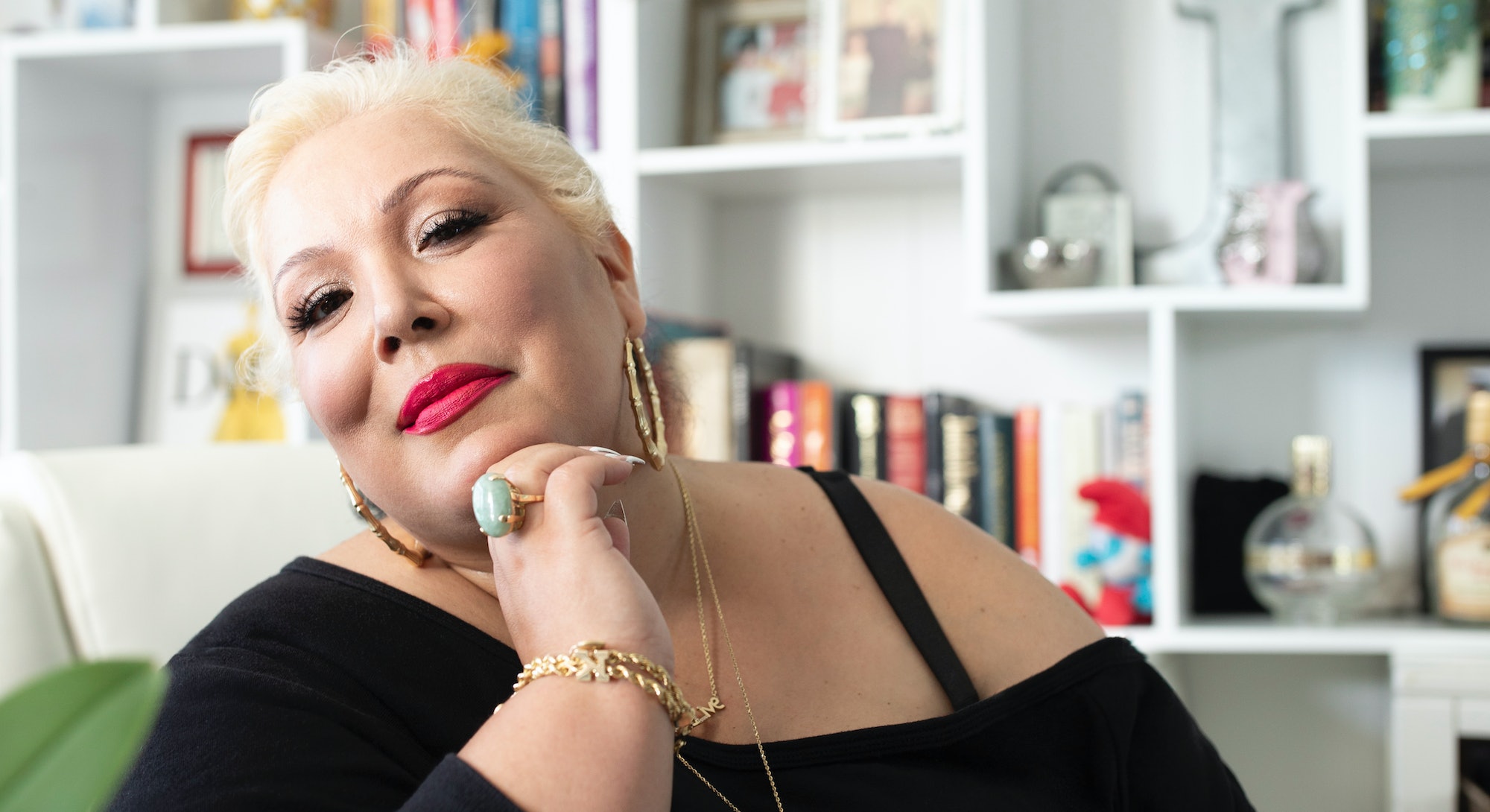 I wanted to warn Jae Rae about my dog, to let her know that she might bark during our interview, but Jae Rae had already sensed her presence, of course.

“That’s the first thing I picked up,” she tells me when we speak over Zoom one afternoon in May. She senses also that my dog’s name begins with a C (true), that she’s 6 years old (true), and that I’ve had her for about four years (true). She senses that my dad is a Pisces (true) and that he’s the reason I over-compromise in relationships (no comment). She senses... something about Yugoslavia? We can’t figure out that one.

Jae Rae is a psychic, a medium, a tarot card reader, a spiritual consultant... you name it, really. No, seriously. If you could find a way to succinctly summarize everything Jae Rae does, that would be a big help, because for years she and her team have struggled to find a term that neatly encapsulates all of her spiritual and energy work.

“The biggest problem I have right now is how to label me,” she says. “Nobody can do what I do.”

Not that this labelling issue has hurt her business at all. Jae Rae’s lengthy and almost entirely secret roster of clients includes multibillionaires, and megacelebrities like J.Lo.

And for about one hour, me. I had been worried that the usually drab and soulless medium of Zoom might dampen Jae Rae’s connection to the spiritual realm and affect our session. But given how quickly she was able to access information about my dog, it seemed my concerns were misguided. In fact, she says, she actually prefers to do readings over video chat because clients are sometimes overwhelmed by her physical presence.

“I’m a very intimidating person,” she explains. On the day we talk, her platinum blonde bangs are swept across her forehead, above thick-rimmed glasses and bold red lips, and she’s wearing a Run-DMC T-shirt with a keyhole cutout on her chest, and heavy gold hoop earrings. Throughout the reading, she takes sips from a pink and silver bedazzled cup roughly the same size as the NASA Space Shuttle that says “Jae Rae” on the side in loopy cursive script. (Much like the ones J.Lo has been seen sipping from.) She swears frequently and enthusiastically, and delivers her psychic missives with the same unrelenting precision and force as a boxer wailing on their opponent.

“I’m big. I’m strong. I’m energetic. I come into a room, and people get what’s called ‘psychic amnesia.’ They forget their name, their mother’s name, when they were born. So I have noticed that my energy in a room has people hold back a little bit, whereas with the camera they feel more open.”

I’m not sure how open I feel during our call. Whether you’re a believer in extrasensory perception or not, it can be unsettling to imagine someone accessing parts of you that you didn’t want to share, or maybe didn’t even know about. As Jae Rae speaks, I nod attentively while at the same time desperately trying to sweep some of my more vulnerable thoughts and feelings under a sort of psychic rug. I hope this will have the effect of making Jae Rae notice everything that is perfect about me, and miss everything that’s not.

“You’re going to be where you are for another year or so,” she says at one point, as we discuss my dating life. “So you can confidently find yourself in a relationship without feeling like, ‘Well, I don’t want to get into anything because I don’t know where I’m going to be.’ Bullsh*t! That’s just the f*cking wall that you’re putting up. That’s just an excuse for having not found the right one yet. You haven’t found them because you don’t know who you are.”

For as long as she can remember, the 47-year-old Jae Rae, born Jennifer Lamas, has felt a presence with her. She identifies this presence as God, though she clarifies that it’s not a Christian God, and that she doesn’t need the people she reads for to be religious in any way. “I’m not here to convince you to believe in anything, but just know there’s no way I’m going to know things without knowing you, unless somebody is telling me. And who that somebody is… it’s the greatest lesson of all.”

Her connection to the spiritual realm often starts with chills. That’s when she knows a spirit has entered the room. Sometimes, her whole body convulses, or she feels like the breath has been knocked out of her. For her readings, she says, she syncs up with people’s energy by saying their names, because our names hold our vibrations. Then, she goes deep. “If you’re asking me to go into your subconscious, what I’m aiming to do is find out what the root cause is of why you keep making the same mistakes over and over again, in a very short period of time.”

Jae Rae is well in command of what she calls her “gift” now, but it wasn’t easy as a kid, when she was growing up on Staten Island. The adults around her weren’t sure how to deal with her. She recalls one incident in particular, in kindergarten or first grade, when she saw the recently deceased mother of her teacher, Ms. Fishman, sitting at Ms. Fishman’s desk. When the young Jae Rae told her, “Your mommy’s here,” Ms. Fishman was understandably upset. She told Jae Rae to “knock it off,” and then called the principal to say that the girl was causing problems. Her mom came to pick her up, and yelled at her the whole way home: “I told you not to do that! If you see anything, don’t say anything!”

She learned to downplay her gift after that. Even if she had been encouraged to explore her abilities, though, being a psychic isn’t like being a doctor: there’s not a standardized curriculum for you to study, no clear career path for you to follow. After she graduated, she worked as a hairdresser; got married; had three kids. She only began to seriously explore her craft in her late 20s. Her dad had died, and she believed that her young son might be a medium as well, because he seemed to be having conversations with his deceased grandfather at the table where they had read together. Jae Rae wanted to better understand what she and her children were experiencing. She started studying medallions, numerology, astrology, pendulums, tarot cards, sacred geometry, anything that would help her hone her gift.

In 2005, at God’s urging, she left her husband, and moved with her kids to Tampa, Florida. There, she met Janet Sciales, a well-known astrologer (who inspired the 1992 movie Afterburn, starring Laura Dern) who was so impressed with Jae Rae that she told her to meet her the next Monday morning at CBS to do readings for listeners on Sciales’ radio show.

“I put these headphones on, and I felt like I was home,” she says.

After that, things moved quickly. She got noticed by Nuyorican Productions, Jennifer Lopez’s production company, which was looking for a “Latin Long Island medium” for a possible show. In the early 2010s they flew Jae Rae out to Los Angeles to put together a reel, and while she was there, Lopez said she wanted to meet her. Jae Rae was whisked up to Lopez’s house in the Hollywood Hills, where she talked with Lopez and gave her information that “came to fruition pretty quickly after” (she won’t tell me exactly what). Lopez declared her “the real deal.”

The two have been friends ever since, and over Zoom, she points to a large Dior coffee table book that Lopez got for her. Which is why I proceed with extra caution when I ask the next question — the question, I suspect, you all came here for: Did Jae Rae foresee the apparent return of Bennifer?

“I have so many NDAs, so I’m just going to say this: J.Lo is a special, special friend and a lover of love, and the most open-minded, open-hearted person I know,” she says. “The art of letting go has always been the conversation with her and I. Letting go so something can come back.”

Choosing her words carefully, she adds: “It doesn’t surprise me, with all of the spiritual conversations and lessons that her and I have had that this would come to sort of… fruition.” She then says: “If it stems [sic] to be what it is, then I can’t wait to see it come to the place that I feel that it should.”

She concludes by saying that she and Matt Damon “have a lot of the same ideas.” (Earlier that month, Damon made an appearance on the Today show where he was asked about the possible return of Ben and Jen, and replied: “I hope it’s true. I love them both. I hope it’s true. That would be awesome.”)

I want to spend at least three more hours on this line of questioning, but I move on out of respect for existing legal pacts.

As we near the end of our time together, I am feeling rather raw and exposed. Jae Rae describes a couple of spells I should do: one to ensure my financial well-being, and one to move on from a past relationship.

As soon as we hang up, I notice my selective memory kicking in. I can feel myself starting to cling to the parts of her reading that reinforced what I wanted to hear, and ignoring the parts that didn’t. I can see why sessions like this would be appealing to billionaires — or anyone, really (though readings with Jae Rae don’t come cheap: a 45-minute FaceTime session with her runs $500, while a one-on-one “guided tour to your higher self” will set you back $1,000). It’s reassuring to think that someone, somewhere knows what you’re doing and where you’re headed.

I do the spells of course, to be safe, starting with the relationship one, which I was told I had to complete before the next full moon. A few days after our session, I light two white candles, and write on a piece of paper that the “soul contract” I had entered into during a previous romance is now “null and void.” I watch the candles burn, and wonder what ideas Matt Damon would have about my dating life.