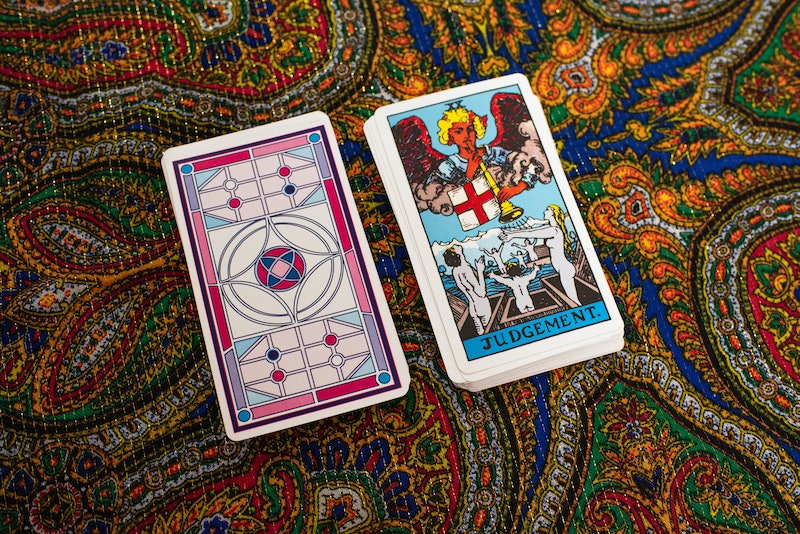 A tarot deck can be a great tool to turn to if you’re struggling to find answers to questions you have about your career, your relationship, or your life in general. While some use it to see what the future holds, tarot can be a great source of advice or reassurance that the path you’re currently on is the right one.

For instance, if you have a big decision weighing on your mind, one that may affect your life in a major way, the Judgement card may be one that comes up in your reading. Unlike the Tower or Death card which symbolize major upheavals, Judgement puts the power in your hands. Read on to see what professional tarot readers think you need to know about the meaning of the Judgement tarot card.

In tarot, 22 cards depict the Fool’s journey through the major arcana. The Judgement card is number 20, and the second to last card in the journey. It follows the Sun and comes before the World.

“While the World is the completion of the Fool’s journey, the Judgement card is considered his chance at redemption,” Davida Rappaport, tarot reader and spiritual counselor, tells Bustle. “It’s an opportunity for him to take responsibility for the life he has led up to this point so he can be reborn or reinvent himself.”

According to Rappaport, the card in the traditional Rider-Waite-Smith deck shows the archangel Gabriel blowing his trumpet, calling people to rise up, take responsibility for their mistakes, and then be absolved of their sins. “Judgement is a reminder that you can rise to the challenges life presents you, and to not judge yourself or others,” she says. “Just do what you must and things will take care of themselves. I often equate this card to Dumbledore’s Phoenix rising from the ashes.”

There is so much meaning to the Judgement tarot card, and every reader will interpret it differently. Regardless, it’s still worth it to know the basic meaning behind the card so you can apply it to your own situations.

What Does The Judgement Tarot Card Mean?

To understand the basic meaning of the Judgement tarot card, it’s important to look at both its astrological association and its numerology. As Danny Santos, professional tarot reader and spiritual life coach, says, Judgement is associated with Pluto. Pluto is the ruler of the underworld, the unconscious mind, intensity, sexuality, and transformation, so when Judgement comes up in a reading, big changes may be in store for your life.

In addition to change, Judgement also has to do with decision-making. “Numerologically speaking, Judgement would be the higher octave of The High Priestess (card two in the major arcana), as Judgement reduces down to 2,” Santos says. “It would also be related to Strength (card 11, 1 + 1 = 2),” Santos says. “The Judgement card teaches us to put our intuition (High Priestess) and our Strength together to create the most divine outcome for any given situation at hand.”

What Does The Judgement Card Mean When It’s Upright?

Since the Judgement card is part of the major arcana, “life-changing circumstances” are at play. When you pull the Judgement card upright, you may be at a crossroads in your life and you’re in the process of deciding which direction you want to go. “Whatever decision lies in front of the querent, this card asks you to slow down, think things through, and make a decision filled with a full evaluation of all elements at play: mind, body, heart, soul, and spirit,” Santos says.

In the Rider-Waite tarot, the imagery of the card shows bodies being resurrected from the dead as an angel blows the “horn of heaven.” According to Santos, the resurrection scene is a reminder that with death, rebirth always follows. “However Judgement is cast, this card reveals that one reality is being severed in favor of another,” Santos says. “Judgement can have deep implications for the psyche as it transcends the mundane and material world. This card brings up the age-old question of, ‘What is my destiny?’” The decision you make will likely change the course of your life, so it’s important to really think things through.

What Does The Judgement Card Reversed Mean?

If Judgement is pulled in reverse, it’s a reminder to stop judging yourself and others. You may be in a situation where you have to choose between making a big move or staying right where you are. The Judgement card may appear in reverse if negative thinking is blocking you from taking that next step forward.

For example, you may be debating whether you should or shouldn’t stay in a long-term relationship that’s no longer making you happy. Judgement in reverse may come up if thoughts like, “I won’t be able to find someone who loves me as much as my partner does,” or “Dating is going to be way too hard,” prevents you from ending a relationship and finding one that’s actually right for you.

According to Rappaport, Judgement in reverse is also telling you to take responsibility for your actions, stop doubting yourself, and most importantly, allow yourself to grow and welcome change. “As in life, if you don’t take the opportunity to make changes and reinvent yourself from time to time, the universe will force you into situations where you have to reinvent yourself,” Rappaport says. “If Judgement is reversed in a reading, it can show how you should step up and allow for a change in your life since stagnation and negative thinking can keep you spiraling, making it harder for you to deal with a difficult situation.”

The overall message is to make changes while you still have the power to make them, instead of waiting for the universe to force change upon you. Be decisive.