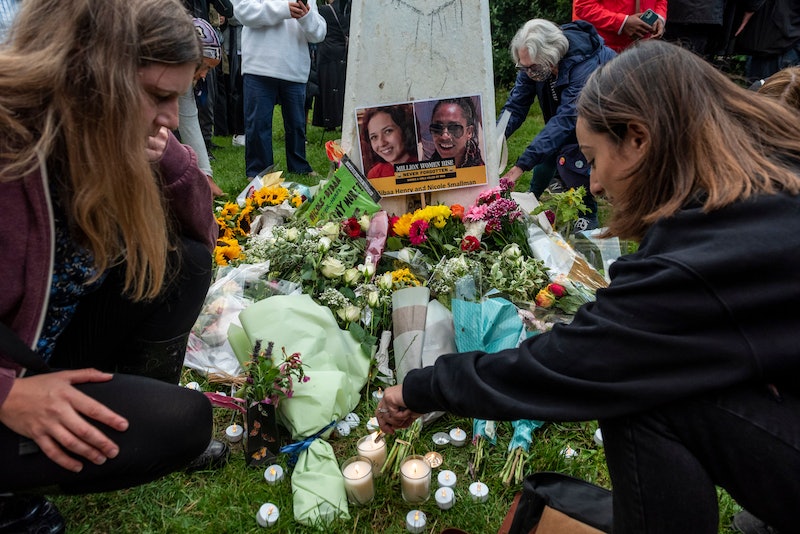 Trigger warning: This article contains mentions of extreme violence, as do many of its outbound links.

On June 7, 2020, sisters Nicole Smallman and Bibaa Henry were found stabbed to death in Fryent Country Park, London. Just hours before, they had been pictured celebrating Bibaa’s 46th birthday with friends.

While news of the murders was tragic enough, it was later reported that two police officers had taken “non-official and inappropriate photographs” at the crime scene that were “shared with a small number of people,” including members of the public.

On July 6, 19-year-old Danyal Hussein was found guilty of murdering Bibaa and Nicole, but the family are still waiting for the trial against the two police officers to begin. Here’s a break down of what’s happened with Bibaa and Nicole’s case and where things stand now.

On June 5 at around 7 p.m., 27-year-old photographer Nicole attended a birthday gathering for her half-sister Bibaa, a social worker, in Fryent Country Park, North London. They were with friends, celebrating and images have since been released by the police of the sisters dancing with fairy lights in their hands. It’s been reported that their last contact with family and friends happening at 1.05 a.m.

When Nicole and Bibaa didn’t return home, their family reported them missing on June 6. However, it wasn’t until roughly 1 p.m. on June 7 that Nicole’s boyfriend found both her and Bibaa’s bodies in the park. The sisters died in the early hours of June 6. Nicole's boyfriend also found a knife, and a post-mortem examination stated multiple stab wounds was the cause of death of both women.

On July 6, 2020, 19-year-old Danyal Hussein was found guilty of the double murder. The Independent details that he targeted the sisters as part of a killing spree. He believed he’d made a pact with a “demon” that if he killed six women every six months he’d win a £321m lottery jackpot. The BBC writes that Hussein had an interest in mythology, Satanism, and the occult. The only reason he was caught was because he cut himself when he attacked Henry and Smallman and police tracked his DNA. He’s being convicted for two accounts of murder and has also be found guilty of possessing an offensive weapon.

The Police Investigation & The Photographs

Adam, Nicole's boyfriend, found the bodies of the two sisters after their mother Mina Smallman was forced to coordinate her own search to find them. Mina told the BBC that the Met Police didn’t immediately respond when she made it known that Nicole and Bibaa were missing. “I knew instantly why they didn't care,” she said. “They didn't care because they looked at my daughter's address and thought they knew who she was. A Black woman who lives on a council estate.”

On top of the inertia from the responding officers, the tragedy for Nicole and Bibaa’s family was compounded by an incident that came to light a few days later.

It was discovered that photographs had been taken by two police officers at the crime scene where the bodies were found.

Speaking about this to the BBC, Mina said: “Those police officers dehumanised our children,” she said, adding that news of the photographs took their grief “to another place.”

“If ever we needed an example of how toxic it has become, those police officers felt so safe, so untouchable, that they felt they could take photographs of dead Black girls and send them on. It speaks volumes of the ethos that runs through the Metropolitan Police.”

The Independent Office for Police Conduct (IOPC) opened an investigation into the Met’s handling of the case in June 2020. In a report published on Oct. 25, 2021, the IOPC said the level of service provided was “unacceptable” and identified key failings from the officers involved.

The IOPC investigation states that, due to inaccurate information being recorded in police logs, the duty inspector on this case did not progress the missing person report for Nicole and therefore did not allocate resources to find her. And a missing person report was not created at all for Bibaa until June 7 despite her being classified as missing on the police log.

The IOPC also investigated whether the Met’s actions were influenced by stereotyping, and have reported that “while failings were identified in the handling of the missing persons reports in this case, the evidence did not indicate that this was a result of stereotyping or biased assumptions based on the sisters’ race or where they lived.”

After the IOPC’s investigation into the police’s handling of the case, the Met have apologised to the families of Bibaa Henry and Nicole Smallman. Met Commissioner Dame Cressida Dick said, “While we know that very sadly Nicole and Bibaa had been murdered in the early hours of Saturday 6 June 2020, before they were reported missing, if we had responded better we may have saved their friends and family immeasurable pain.” She added, “I am very sorry that the level of service we provided fell short.” The Commissioner also detailed that the officers and call handlers involved will be undergoing performance reviews and extra training.

However, the sisters’ mother Mina Smallman has said that the apology has come 10 months too late. “We’re not the only parties who suffered mental anguish at the hands of the Met’s incompetent, reprehensible and blatant disregard of agreed procedures regarding missing persons,” Mina said.

She added, “Sorry just won't cut it. It's too hollow. Sorry is something you say when you comprehend the wrong you have done and take full responsibility for it, demonstrating that by taking appropriate proportionate action – which the Met Police have failed to do.”

What Has Happened To The Police Officers Who Took & Shared The Photographs?

Following an investigation from the IOPC, which was referred to the Crown Prosecution Service (CPS) in November 2020, PC Deniz Jaffer and PC Jamie Lewis were charged with misconduct in public office. They were due to appear at the Old Bailey on July 13, 2021, but the hearing was postponed indefinitely, and the pair are still awaiting trial.

A separate inquiry has been opened by the IOPC into six more officers who received or viewed the pictures or were aware of their existence but didn’t report them. These investigations continue and 13 officers in total have been told that their behaviour is under review.

What Can You Do To Help?

Although Hussein is now behind bars and the IOPC investigation has concluded, Nicole and Bibaa’s family is still waiting for the trial of Jaffer and Lewis. One important thing you can do is continue to talk about this case and raise awareness on social media and beyond. You can also contact the CPS via their website to ask why the trial has not yet gone ahead and what the plans are to move it forward.

Editorial note: This piece was updated on October 26 to reflect the latest news in the Nicole Smallman & Bibaa Henry case.

This article was originally published on July 1, 2020