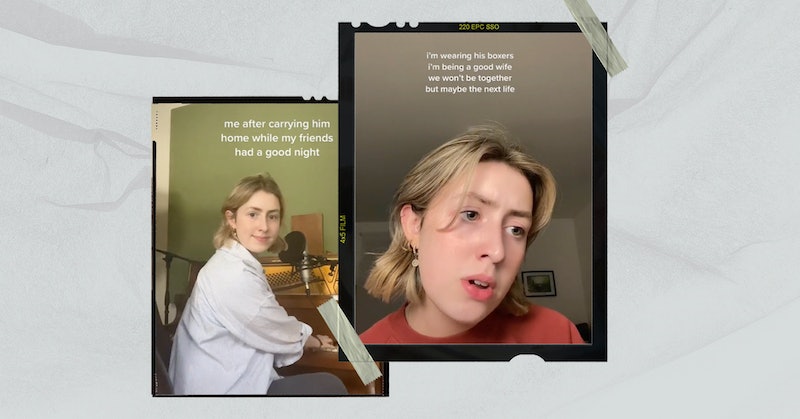 If you’re on TikTok, you’ve probably become all too familiar with getting one of its many viral audios stuck in your head — whether it’s the “Oh, no” sound, or “Spinning Monkeys.” But, there’s a new viral TikTok sound that might be sticking with you for reasons deeper than mere catchiness. Yes, the “Need him like water” ballad you’ve been hearing all over TikTok isn’t just on your heartbroken FYP. It seems as though the entire internet is mourning along with Scottish singer-songwriter Kate Gregson-MacLeod’s “Complex.”

The snippet is a highly vulnerable reflection on being in love with someone incapable of properly loving you back and the savior complex that often coincides with this dynamic. And it wasn’t long before TikTok took Gregson-MacLeod’s song and ran with it — first fangirling over its resonance, then remixing it with their own hyper-specific lyrics.

If you’ve been trying to chase down the origin of the many acoustic remixes on your FYP, or are already penning your own “Complex” remix, here’s everything you need to know about Gregson-MacLeod's song "Complex.”

Where Did The “Complex” TikTok Sound Come From?

Gregson-MacLeod first posted “Complex” to TikTok on Aug. 4, 2022, sharing the chorus of the unreleased song. “I’m wearing his boxers, I’m being a good wife / We won’t be together, but maybe the next life,” Gregson-MacLeod sings at the opening of the clip.

Overnight, Gregson-MacLeod’s video racked up 190K views with interactions from the likes of Lennon Stella and Gracie Abrams, who both added their own duets to the song. She shared her reaction to this attention in a follow-up video on Aug. 5. Singer-songwriter Jensen McRae also commented, “there’s something about ‘he turns off the big light’…just genius.”

Now, the original video has over 7.5M views and 1.1M likes — with over 20.9K videos under its associated audio. Riding the virality of the initial snippet, Gregson-MacLeod released a demo of the full song on Spotify, which now has over 9 million listens.

How Did TikTok React To “Complex”?

Other users even compared the song to Olivia Rodrigo’s “Driver’s License” — which also gained popularity after Rodrigo posted a snippet on TikTok and has since broken records including Spotify’s most streams of a song in a single day.

Of course, others reflected on how much more relatable the song likely is for women than it is for men. “I challenge any man to explain what this song means,” wrote TikToker @avatarshawty.

How “Complex” Remixes Started On TikTok

At some point around the blast-off of “Complex” in August 2022, users began tweaking the song’s relatable lyrics to reflect their personal experiences. Gregson-MacLeod encouraged this online collaboration by posting a stripped down recording for fans to sing along or riff over.

“I need her like water. She says I’m a good time,” sings one TikToker, Jade Bennett. Another TikToker, Spencer Jordan, used the song to reflect on a romance with a fraternity brother.

Some even chose to remix the sentiment of the song entirely — with TikTokers like @liliannemusic giving the song a happy ending by reframing it within a healthy relationship.

Of course, some male TikTokers offered their POV twists on the song, a development that Gregson-MacLeod said she’s not the biggest fan of according to the New York Times. Luckily, some more self-aware creators began parodying this trend, offering an extra meta remix of “Complex.” “She cries in my bathroom interrupting my video game,” joked TikToker @sash1e.

If you’re not looking for any more remixes, though, and just want to hear the rest of “Complex,” then you’re in luck. Gregson-MacLeod’s demo of the song is on Spotify for you to cry and project upon as you please.