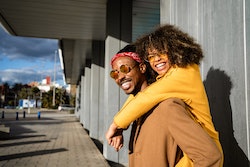 Leo and Scorpio are like night and day. The zodiac’s fiery lion is ruled by the Sun, so they’re energetic, outgoing, confident, and optimistic. Scorpio, on the other hand, is ruled by transformative Pluto, which represents death, rebirth, obsessions, and hidden truths. Because of this, the watery scorpion is intense, secretive, and emotional. It’s a relationship between two signs whose personalities and outlook on life are completely different. Leo and Scorpio compatibility suggests this fire and water pairing might be full of drama.

As Stina Garbis, professional psychic and astrologer, tells Bustle, Leo and Scorpio form a square aspect in astrology, which means they’re 90 degrees apart in the zodiac wheel. “A relationship between these signs can either be riddled with conflict, drama, and power struggles, or they can come together and share their deepest thoughts and secrets, and find renewal and transformation,” Garbis says.

Leo is a fire sign, while Scorpio is a water sign. Since fire and water are natural opposites, fire-water combinations tend to be more challenging than fire and air or earth and water. Despite the potential challenges in their relationship, there are aspects of their personalities that complement each other well. For instance, Leo craves the spotlight, while Scorpio prefers staying behind the scenes. According to astrologer Rebecca M. Farrar, they balance each other out in some ways, and can learn from each other as well.

“A Scorpio's depth and receptivity can teach Leo to care less about the outer world and pay more attention to the inner,” Farrar says. “Although their outer personalities may seem at odds, the differences can pay off in finding a middle between the two. The tension between their different ways of being in the world can create a magnetism with each one craving something in the other they may or may not possess.”

Sexually, Leo and Scorpio compatibility makes a hot combo. According to astrologer Clarisse Monahan, Leo is ruled by the Sun, while Scorpio is ruled by combustible Mars. “Together, they create a lot of fire,” she says.

There can be something intriguing about being with someone who’s completely different from you, and this is what attracts these two in the first place. Leo will love the amount of attention they receive from the intense Scorpio, and Scorpio will be attracted to Leo’s confidence, creativity, and passion. Their differences can also create an interesting type of tension where they seem to hate each other one moment and can’t get their hands off one another the next. They’re both passionate signs, which means their relationship will be filled with spicy interludes and angry sex, Garbis says.

Once they find a middle ground in their relationship, their sex life can be great. According to Garbis, a more open Leo can help liberate Scorpio’s sexuality, and things may get a bit kinky in the bedroom with domination games.

In general, Scorpios are known for being intense. They feel things deeply, give 100% of themselves into their relationships, and have a tendency to become a bit possessive. Leo, on the other hand, is a romantic. They value loyalty, commitment, and they’re known for making grand gestures in love. They’re both fixed zodiac signs, so it will take some time for them to open up to each other emotionally. But once they’ve made a commitment to be together, they’re in it for life.

But the road to happily ever after won’t be smooth for these two. Emotionally, Scorpio and Leo compatibility is that of a pair that could turn toxic quickly. “Whenever Leo says one thing, Scorpio shuts it down immediately, then Leo gets mad and Scorpio sulks,” she says. “It is a constant battle between light and dark, with Leo’s lively Sun being pulled into darkness by Scorpio’s deathly Pluto.” Leo and Scorpio just have a way of easily triggering each other, and the lion may realize they don’t like the person they’ve become in this relationship. Scorpio may feel like their partner doesn’t truly get them.

Unless both partners are willing to take a step back and recognize their unhealthy behaviors, this is a partnership that’s not going to last.

When it comes to communication, Leo and Scorpio compatibility is fairly low. “Both Leo and Scorpio are fixed signs so there will be difficulty compromising while communicating,” astrologer Amy Tripp tells Bustle. “It’ll be difficult for either sign to admit when they’re wrong.” There’s a good chance these two signs may have to deal with power struggles when conflict occurs.

In addition to this, Scorpios tend to be moody and emotional while Leos are more optimistic and go with the flow. According to professional astrologer Frederic Hoffmann, Leos may have to learn to deal with Scorpio’s “deep emotional undercurrents” in order to make their relationship work.

On the plus side, Hoffman says both signs are very passionate and expressive. When things are good, both signs will feel like they have a partner who they can openly share things with.

Leo and Scorpio’s compatibility when it comes to dating isn’t the best. While the relationship can be very sexy and passionate, too much jealousy and stubbornness can sour the connection as time goes on. According to Tripp, the lion and the scorpion can also be pretty dramatic and may have difficulty seeing the bigger picture, which can make fights go on for longer than they should.

“Both signs like power, and without awareness, power struggles could develop and turn bitter or vindictive,” Tripp says. “Watery Scorpio can put out Leo’s fire, and Leo’s fire can make Scorpio boil. These two signs are in incompatible elements making it difficult for them to relate.” They have the type of dynamic that may become toxic if they’re not careful.

If Leo and Scorpio wanted to become friends, they may have better luck than with their love compatibility. According to Tripp, these two tend to make better friends than romantic partners since the expectations they place on each other are much lower. However, it’s still not the easiest match as they have opposite personalities. Leo is very sunny and optimistic, while Scorpios tend to be broody and pessimistic. There’s the possibility that these two would annoy each other if they’re together in one place for too long.

Due to their square aspect, having a successful relationship will take a lot of work. For Leo and Scorpio, one of the biggest issues they may have to deal with is Leo’s love of the spotlight contrasting against Scorpio’s need for privacy.

“Leo's stage presence qualities need a rapt audience in the theatre of love but Scorpios equally need as much devotion, they just prefer to receive it behind closed doors,” Monahan says. “There’s likely to be a standoff due to the amount of attention given to either partner, and both signs may end up feeling frustrated and neglected.”

In order to make a relationship work, both partners need to be willing to compromise. And unfortunately, both Leo and Scorpio can be a bit selfish in relationships. Leo is ruled by the Sun, which represents the ego and the self, and Scorpio likes having things their way. There’s a good chance these two will butt heads a lot. Since neither partner really enjoys giving in, little arguments tend to last longer than they should. Power struggles could be a big relationship-killer here.

Are Leo & Scorpio A Good Match?

Overall, Leo and Scorpio are considered to be an incompatible zodiac match. With different personalities, making things work will require a lot of effort from both partners. But if they manage to put in the work necessary and meet each other in the middle, they have a chance.

“By learning and knowing their partners deepest secrets, motivations, and strengths, this couple could weather any outside storm and accomplish any goal together,” Garbis says.

This article was originally published on Aug. 6, 2021