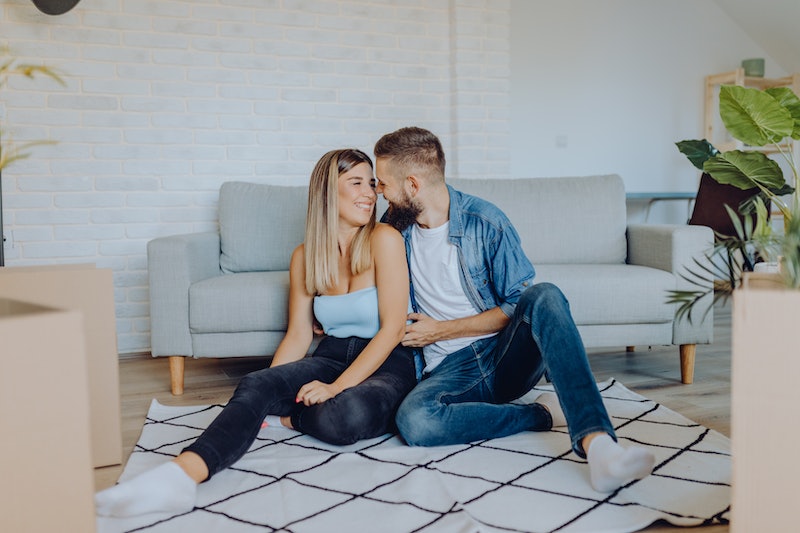 A Libra-Capricorn couple might have a tough time getting a relationship off the ground. For one, Venus-ruled Libra is the sign of partnerships in astrology. They tend to make their relationship the center of their world. Capricorn, on the other hand, is the zodiac’s highly ambitious and hard-working goat. They tend to prioritize career and work over everything else in their life. Even if these two zodiac signs had a strong attraction to each other, making a relationship work may prove too exhausting for either of them. However, there are some things these two can do to improve their connection. Libra and Capricorn’s compatibility shows why this may not be the best relationship for either sign.

“Capricorn, ruled by Saturn, expresses stern rules and restrictions while Libra, ruled by Venus, expresses balance and harmony,” Stina Garbis, professional astrologer and psychic, tells Bustle. “They are both sticklers for the rules, but they go about it in different ways — and for different reasons. Capricorn likes to push their way in and prove their point because this is the way it’s always been done, so this is how it must be,” Garbis says. “Libra, on the other hand, wants everyone to play nice and get along. This couple could definitely battle for power and bicker over who’s right about everything.”

In general, Air and Earth signs don’t always make the best matches because they’re natural opposites. An Air sign like Libra may feel like Capricorn is holding them back at times, while earthy Capricorn may have a hard time dealing with Libra’s indecisiveness. Although there will undoubtedly be quite a few challenges for these two to work through, this can be a relationship that leads to growth for both partners. According to Garbis, “If they stick with it, this relationship could be life-transforming for both of them.”

In astrology, Libra and Capricorn form a square aspect to each other, which means they’re 90 degrees apart in the zodiac wheel. According to astrologer Lisa Kiss, square aspects typically create tension between two signs. One way to release this tension would be through sex. “They both will want to take the lead or initiate what happens,” Kiss says. “This will create great chemistry between the pair.”

When it comes to sex, these two have different tastes. In general, Capricorns tend to be more traditional and reserved in bed, while Libras are into trying new things. Romantics to their core, Libras would love to have candles, music, and wine to set the mood, which is something the more practical Capricorn would only do during special occasions. Capricorns also see sex as something they do to release tension, while Libras view it as a way to connect with their partner. If they’re not on the same page about their sex life and what each other needs, there’s a good chance one or both partners will be left feeling unsatisfied.

It will take some time for Libra and Capricorn to develop a deep emotional bond. According to Garbis, Capricorns tend to have a hard time entering into commitments and may take a while to come around.

“Unfortunately Capricorn may not always be pleasant to deal with, and they express their bad sides in their most intimate relationships,” Garbis says. “They may have a lot of hang ups that only they can manage, and they may push away close people, because sometimes it's hard to deal with their issues close up. However, Capricorn does their most transformational work in relationships.”

The good thing is, Libra is the sign of partnerships, so they may take on the role of “teacher” in the relationship. According to Garbis, Libra will be a great tour guide for Capricorn, if Capricorn is willing to let them in. Once they do, Capricorn will almost be like a whole new person. “This relationship could be awesome for Capricorn who gets to learn about themselves and transform,” Garbis says. However, this all depends on how patient Libra is. If they decide it’s too much effort to wait for Capricorn to open up and be relationship-ready, they may decide to move on.

When it comes to dating, Libra and Capricorn’s compatibility isn’t very high. According to Garbis, fun-loving Libra may find the more serious Capricorn a bit boring, and they may not even get along on their first date. Libra wants romance and affection, which doesn’t come naturally to Capricorn. Libra, on the other hand, is very flirtatious by nature which can make Capricorn feel uneasy. It’s going to take some time for these two to understand each other enough to commit to a relationship. Once they’re in a relationship, it can work. It’s just going to take a lot of effort.

Libra and Capricorn tend to do better as friends. According to Garbis, they’ll be the type of friends who can help each other decode their personal relationships. “They each take a dramatically different approach to love and understand people in different ways,” she says. “ If either of them are having a problem in their relationship, the other can be a great support and translate their significant other’s actions, words, and texts.” There will be a lot of nights staying in, watching a movie, and complaining about exes.

One thing they may have to watch out for is competition, especially at work. “Capricorn wants to appear brilliant and Libra wants to be right,” Garbis says. “Either one of them may throw the other under the bus if they are competing in the same office.”

As far as communication goes, this is a couple that likes to bicker. “Libra will complain while Capricorn will ignore them until finally it comes to a head,” Garbis says. Libra may argue that they don’t feel understood, while Capricorn may shut down, preferring to stay away from drama.

The only thing that can really resolve the issue is space or a cool off period. Capricorn will eventually calm down and will eventually express their feelings about what went wrong after things have simmered down, Garbis says. Libra will feel relieved that they didn’t say the worst things that came to mind.

“When they come back together again they will both lovingly apologize and maybe have some crazy make up sex,” Garbis says. “They both don’t like to fight, but they both love to fight, which may be a reason that these two shouldn’t be together because they fuel each other’s dark sides.”

For Libra and Capricorn, making an actual commitment to each other will be an issue they’ll fight about over and over again. According to Garbis, Capricorns tend to save their serious relationships for later on in life and may not settle down for a long time, which may or may not work for Libra. They tend to fall in love very quickly, and they also get bored just as fast. “Libra likes harmony, and for people to be in love with them, and I think they would rather be the star and center of attention,” she says. If Capricorn isn’t giving Libra the time and commitment they desire, the relationship might not get off the ground.

Additionally, Capricorn is very career-oriented, while Libra is all about relationships. Libra will appreciate Capricorn being the provider, as they enjoy living in luxury. However, that will only last for so long. If Capricorn constantly puts work over the relationship, Libra may decide to look elsewhere.

So, can this relationship last? According to Garbis, it can, especially if there’s an age difference where one partner is more mature than the other. “Capricorn is more likely to settle down later in life after they are more seasoned, while Libra might want to wait a bit on this connection and go with someone a little more happy-go-lucky in the meantime,” she says.

Are Libra & Capricorn A Good Match?

Overall, Capricorn and Libra are considered to be an incompatible match. There will be many bumps in the road for them to navigate, but if they’re committed to making it work and they put in the effort, there’s potential for these two to last.

More like this
Why A Libra & Libra Couple Might Become Codependent
By Kristine Fellizar
Libra & Aquarius Can Be Great Together, As Long As They Do One Thing
By Kristine Fellizar
6 Dating App Tips To Try If You're Looking For A Serious Relationship
By Lexi Inks
Are Quality Time & Gift-Receiving Love Languages Compatible?
By Lexi Inks
Get Even More From Bustle — Sign Up For The Newsletter

This article was originally published on Oct. 12, 2021