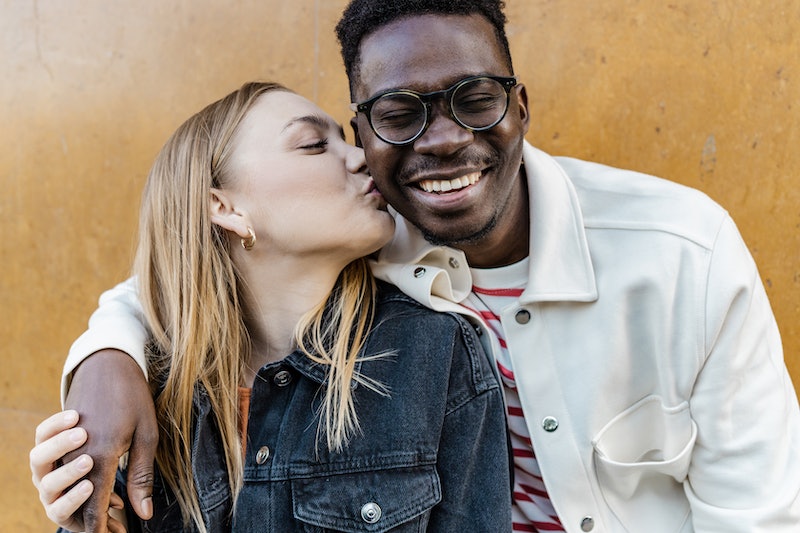 When two people of the same zodiac sign get together, the relationship could go either way. At first, you’ll feel like you have finally met someone who truly gets you. As time goes on, you may realize that your worst traits just so happen to be their worst traits too. That seems to be the case with a Libra and Libra relationship. When these two first start dating, every day will feel like a fairytale, but how long will that honeymoon phase actually last? Libra and Libra’s compatibility shows why two charming Libras make an OK match.

“The vibe between two Libras starts one of two ways: contentious or flirty,” according to Dana DeFranco, astrologer and co-host of the Allegedly Astrology podcast. “If the former, the two are likely to steer clear of each other. If the latter, then this pair will often feel enamored with one another, and the physical chemistry will be off the charts.”

Libra is a cardinal sign, which means they’re the initiators of the zodiac. According to DeFranco, cardinal signs mark the beginning of each season, so they know how to get things started. Libra is also ruled by Venus, the planet of love, beauty, and pleasure. Because of this, they’re very romantic and relationship-oriented.

In fact, there’s nothing Libra loves more than being in a relationship. According to astrologer Sofia Adler, Libras have a natural talent for making the people in their lives — especially their partners — feel seen, heard, and appreciated.

“The potential for this becomes even more potent in a Libra-Libra relationship,” Adler says. “That said, it's important to work on boundaries and know when it's not only OK but needs to be all about you. Harmony in a relationship will never exist if you're afraid to share how you're feeling or what you need because you're so focused on your partner.”

Sexually, two Libras make a solid match. “Venus strives for harmony and Libra knows how to maintain it,” DeFranco says. “The synergy between two Libras in bed flows quite nicely. Libra and Libra will have hot sex.”

Since they’re cardinal signs, they won’t hesitate to make a move, and the relationship could escalate to a physical level quickly — even as soon as the first date. As the sign that rules the Seventh House of Partnerships, Libras are fueled by a desire to please. “Chances are, neither will settle until their partner is completely satisfied,” Adler says.

They tend to have a more romantic approach to sex, especially early in the relationship. For them, setting the mood with lighting and music is essential. As an air sign, communication comes very naturally to them, so verbal foreplay, sexting, and dirty talk tend to be big turn-ons.

Libras love being in love. They’re the serial monogamists of the zodiac and will go from one long-term relationship to the next. Because of this, they tend to fall in love very quickly. Many times, it’s love at first sight. If two Libras find themselves attracted to each other, they won’t waste any time getting together.

“Once dating, the relationship between two Libras is every bit as perfect as it looks on Instagram — a Libra’s dream come true!” DeFranco says. At least, at first. “However, this can lead to their downfall because, as we know, Instagram is not real.”

According to her, Libras don’t like to think about the post-honeymoon phase because for them, it never ends. “Libras are experts at cultivating an eternal paradise within their relationship,” she says. “As the sign of partnerships, they come to know themselves best through their committed partnerships with other people.”

It’s easy for them to get so wrapped up in each other that they lose their sense of identity. Their emotions are tightly tied to each other’s, so if one partner is moody or upset, it will have an outsized effect on the other person as well.

Libras tend to get very in their heads. According to Adler, “A Libra and Libra pair need to watch out for times they’re overanalyzing or talking themselves in circles about a problem in their relationship. Remember to drop back into your body and connect with how you feel.”

Two Libras can make a great love match, especially in the very beginning. As Jennifer Foster, astrologer and life coach, tells Bustle, they share similar values and beliefs, which will allow them to accomplish many things together. They also value commitment and have a “spiritual perspective on love,” meaning there’s a soulmate feel to their relationship.

Neither partner will shy away from love, and may even find themselves falling for the other right away. It’s not uncommon for two Libras to jump into a serious relationship after a few dates. However, since there’s no grounding force in their relationship, it’s very easy for these two to get swept up in their new romance. It can hit them harder than most when they realize their new partner or relationship isn’t as perfect for them as they initially thought.

When it comes to friendship, Libra and Libra’s compatibility is pretty high. Libra is a naturally friendly and outgoing sign and will get along with one another right away. It’s one of those situations where they feel like they’ve known each other their whole lives after meeting for 10 minutes. Libras are fun-loving, open-minded, and adventurous. They’ll happily be each other’s plus-ones at parties or work events, and will somehow make the experience a lot more lively and enjoyable. If two Libras are work friends, they will inspire others around them, says Foster. They will proudly share each other’s work and will always be there to support one another.

Libras are naturally good communicators. According to psychic intuitive Nancy Mello, Libra and Libra will have a lot of “fabulous” conversations. They’ll enjoy getting into friendly debates about movies, TV show theories, and trending topics, among other things. They value justice and fairness and may have lengthy discussions about politics and world events. But more often than not, Libras tend to keep their conversations fun and lighthearted.

One thing to keep in mind, however, is that Libra needs harmony and balance in their relationships. If they’re bothered by something their partner does, they tend to keep their thoughts to themselves just to keep the peace. Naturally, this can lead to resentment and grudge-holding if their feelings aren’t known. Keeping the lines of communication is essential to a harmonious Libra-Libra relationship.

If you know anything about Libra, this shouldn’t come as a surprise. Libras are represented by scales, so they tend to be very indecisive. This is the type of couple that will go back and forth for an hour trying to decide what to eat for dinner. Since they tend to value their partner’s opinions over their own, it can take a while for either of them to come to a definitive conclusion about anything.

“Eventually, someone is going to have to make a decision,” DeFranco says. “Libras don’t struggle with knowing what they want as much as they struggle with verbalizing it to other people. So for the Libra-Libra relationship to last, at least one partner will have to understand this and commit to a path of self-assertion with their partner.”

Codependency is another potential issue these two will have to deal with. Because Libras place so much importance on their romantic relationship, even if they’re unhappy with the way things are going, they may not say anything to avoid causing any inkling of disharmony. According to DeFranco, “As long as Libras cultivate and maintain their boundaries with each other, they can build a lasting relationship and challenge themselves to grow in the process.”

Are Libra & Libra A Good Match?

Overall, two Libras in a relationship make an OK pair. At the end of the day, they get each other and have great sexual chemistry. However, they need to set healthy boundaries and remember that a relationship can’t be their entire world. If they can do that, they can have the lasting partnership they’ve always dreamed of.

Dana DeFranco, astrologer and co-host of the Allegedly Astrology podcast