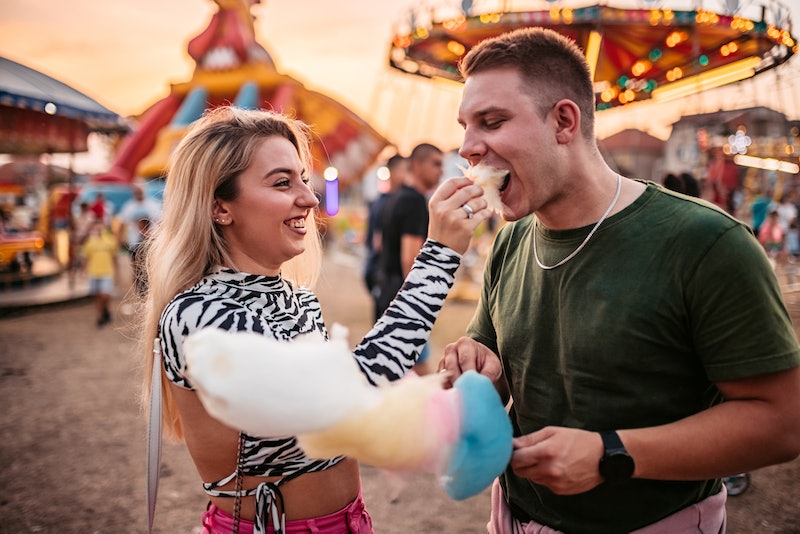 Are Libra & Scorpio Compatible In A Relationship?

When passionate Scorpio meets romantic Libra, sparks are sure to fly. Scorpio will be drawn in by Libra’s charm and grace, while Libra can’t help but be intrigued by Scorpio’s mysterious, “bad boy” energy. These two will have the type of relationship that becomes serious very quickly, but how far can an intense attraction actually go? Libra and Scorpio’s compatibility shows why this air and fire duo make for a hot pair of neighboring signs.

“A relationship between Libra and Scorpio can be a dark prison yard of betrayal and treachery, or it could be a relationship fit for royalty,” Stina Garbis, professional astrologer and psychic, tells Bustle. “Scorpio is ruled by Pluto, who is also known as Hades, God of the Underworld. As the myth goes, Hades abducted the beautiful Persephone and dragged her down into his realm and made her his queen. Like Hades, Scorpio can form an obsession with beautiful Libra, who is ruled by Venus, and will do almost anything to win their affections.”

Libra will be able to provide the moody scorpion with a sense of safety, which will allow them to become more emotionally open. According to Garbis, Libra loves the depth and mysteriousness of Scorpio, and this can be a good match with an interesting balance. “However, if this relationship goes unchecked it could slip into a toxic mess,” she says. Jealousy, anger, and control issues may be key things this couple will have to work through.

Sexually, Libra and Scorpio make a really great match. According to astrologer Lisa Kiss, Scorpio rules over sex and the genital area in astrology and is considered to be the most sexual sign. Paired with the romantic Libra, whose main goal is to please their partner, and you have a perfect match in the bedroom.

Airy Libra is very good at communication, which will benefit them both. They’re kind, patient, and nonjudgmental, and will help Scorpio relax and explore their deeper fantasies. This is one couple who will be willing to try new things together, and may even play around with bondage. As long as Scorpio makes Libra feel cherished in bed, they won’t have any problems.

This is one area of their relationship that may cause problems as they’re very different. Scorpio is a deeply emotional Water sign who stews over their feelings, while Libra is an Air sign who tends to intellectualize theirs. “This wouldn't make much sense to a Scorpio because they feel their emotions in their body,” Kiss says. “They know intuitively what they’re feeling, while Libra might need logic to make sense of what’s going on inside.” Although Libra is a sign who tends to fall in love at first sight, their emotions tend to be on the shallower end of the spectrum. Scorpio may see Libra as someone who isn’t as serious about their relationship as they are, even if that’s not really the case.

Scorpio’s dark moods and need for privacy might also cause tension in the relationship. Libra is the sign of balance and harmony. If Scorpio chooses to keep their feelings inside, which they tend to do frequently, this will frustrate Libra enormously. Scorpio may even lash out if they feel Libra is being too pushy about getting them to open up, which will only result in Libra pulling away.

When it comes to friendship, Libra and Scorpio’s compatibility isn’t the best. “These two may have a hard time being just friends,” Garbis says. “Underneath their friendship, there could be a little bit of jealousy, lust, and a touch of loathing. Libra may be jealous of the vavavoomness of Scorpio, and Scorpio may despise the popularity and know-it-allness of outgoing Libra.” Interestingly enough, these are the qualities that attracts them.

In general neighboring zodiac signs don’t have the easiest relationships, and that’s the case with their friendship. These two were just born to compete, Garbis says. They may end up stepping all over each other to get their way.

Libra is an air sign, which means they’re naturally good at communicating. In fact, Garbis says Libra is one of the best communicators in the zodiac as they have the natural ability to bring people out of their shells. This works really well in the case of Libra and Scorpio because the latter will feel safe enough to share their deepest secrets in the relationship. That’s not something that comes very easily to them. However, establishing a strong foundation of trust at the beginning will be essential for communication to flow smoothly in their relationship. That may take a bit of time as Scorpio is naturally guarded.

A big problem area between these two is jealousy. Libras are naturally charming and are notorious for being one of the most flirty zodiac signs. This isn’t a great match for Scorpio, who’s very protective over what they believe is “theirs.” According to Kiss, Libra would have to do their best to tone down the charm just to please their Scorpio partner, or prepare to do some major reassuring. “Scorpios are one of the most loyal signs and wouldn’t dare to flirt with others,” she says, and they expect the same from their partner.

They may see Libra’s “flirting” as a betrayal and gradually lose their trust in them. Some Scorpios may even try to control who their partner is allowed to see or talk to. Libra may be put off by Scorpio’s possessiveness and decide this isn’t the right relationship for them. However, some Libras may accept Scorpio’s dominating nature, which could potentially lead to a toxic relationship.

Are Libra & Scorpio A Good Match?

Overall, Libra and Scorpio make a decent match. Scorpio will give Libra the love and attention they crave in a relationship, while Libra will bring optimism and balance to Scorpio’s life. According to Garbis, this is one couple that can last as long as they establish some healthy boundaries early on.

This article was originally published on Oct. 5, 2021