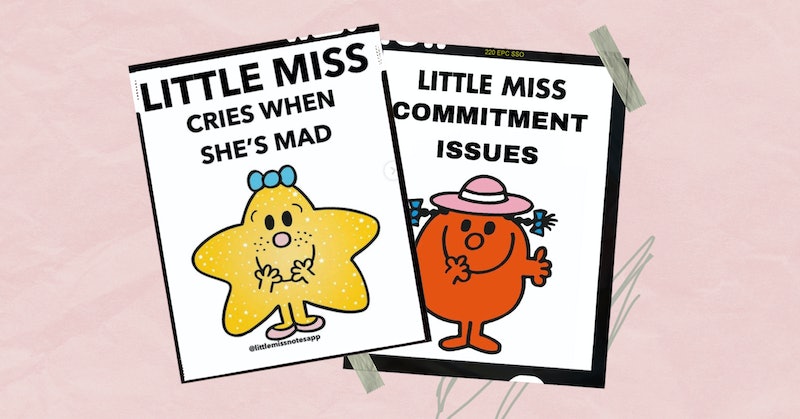 In June 2022, American Girl dolls received the meme treatment. Now, TikTok and Instagram users are associating themselves with a literary character that was consistently found on the shelves of young millennials. Do you remember the colorful, miniature characters wearing nothing but bows in their hair, sometimes a fashionable pair of shoes, or a hat too small for their body? These adorable characters are the internet’s newest form of emotional therapy — using “Mr. Men” and “Little Miss” to call out their own insecurities and personality traits.

What started out as children’s books such as Mr. Grumpy, Little Miss Bossy, and Little Miss Stubborn have now turned into a legitimate Instagram takeover, with Gen Z creating their own Little Miss, followed by a hyper specific quality about themselves. Whether it’s “Little Miss Repressed Childhood Trauma,” “Little Miss Daddy Issues,” or “Little Miss College Dropout,” these colorful, four-fingered, recognizable creatures from childhood are more relatable than ever.

Just like the American Girl trend, the “create your own” Little Miss is essentially a fill in the blank situation. Yes, the wording is a bit outdated — women being associated with “little” and men being tied to “Mr.” For that reason, the gender neutral character “Mx” has commonly replaced the use of “Miss” and “Mr” in order to represent the nonbinary community within this meme.

Users of the trend use it for everything — from calling out their emotional instability or hyping themselves up — the Little Miss possibilities are endless. Take “Little Miss Cries When She’s Mad” for example, because like, same. If you want to expose yourself by using the Little Miss meme, keep reading to understand what, why, and how this trend became a thing.

Where Did Little Miss And Mr. Men Memes Come From?

The Mr. Men book series was created by Roger Hargreaves in 1971 with the birth of “Mr. Tickle” — a squiggly yellow creature sporting a tiny blue hat. Looking to open up to a wider audience, Hargreaves created the Little Miss series in 1981 — introducing his young readers first to “Little Miss Sunshine,” “Little Miss Naughty,” and “Little Miss Bossy.”

The book series took readers through a day in the life of each Mr. Men or Little Miss — showing how their names impacted their traits, personalities, and individual choices. Past the Spice Girls getting their own “Little Misses” and “Little Miss Princess” being created to celebrate the wedding of Prince William and Duchess Kate, the Mr. Men and Little Miss books have taken on a new form and are once again connecting with Gen Z, one of the audiences they helped raise.

On April 19, 2022, Instagram meme creator @juulpuppy, created the first “Little Miss” meme, bringing to life icons like “Little Miss Borderline Personality Disorder,” “Little Miss Neurodivergent Stripper,” and “Little Miss Irritable Bowel Syndrome,” causing over 44,000 fans to be hit with both intense feelings of relatability and nostalgia. From there, the trend outgrew itself, as many memes do, and was quickly adapted on both TikTok and Instagram. Other Instagram accounts like @littlemissnotesapp began to repost @juulpuppy’s creations until they decided to develop their own versions of the memes as traction grew.

The memes started as a way for people to speak candidly about their mental health, physical struggles, and even insecurities. Examples like “Little Miss Homewrecker” and “Little Miss Anxious Attachment” resonated with people and provided laughter toward less lighthearted topics. Instagram users have since started to repost “Little Miss” memes describing themselves to their story in hopes that their followers would find it funny, or possibly even a bit relatable.

This form of emotional expression has now transformed into individuals calling out their own red flags. “Little Miss Wants Her Ex Back,” “Little Miss Former Horse Girl,” “Little Miss Narcissist” and “Little Miss In Love With Her Sneaky Link” were created by @starbucksslayqueen — providing followers with the material to easily torment themselves. No longer are people keeping their insecurities a secret. Sharing is caring in this case. Tag yourself, I’m “Little Miss Cheese Pizza Only” or “Little Miss Can’t Spell Restaurant” because TBH, I’ve been there.

Along with “Little Miss,” @starbucksslayqueen and other creators incorporated “Mr. Men” as well. “Little Miss” isn’t the only one who deserves to be called out. With that, characters like “Mr. Can’t Get It Up,” “Mr. Get On Top,” and “Mr. Doesn’t Use Deodorant” were born — giving people the avenue to reference their ex’s red flags that they otherwise would’ve kept hidden. Hey @starbucksslayqueen, I need a “Mr. Told Me I Was The Only Girl But Was Actually Talking To Three Of My Closest Friends,” please and thank you.

On TikTok, people have started describing themselves, their exes, or their friends as “Little Miss” or “Mr. Men” characters in 30 second long videos — claiming traits they might have been embarrassed about in the past. Starting at the beginning of July 2022, @starbucksslayqueen started sharing their graphics on TikTok, gaining even more attention for characters like “Little Miss Forgets To Eat” and “Little Miss Depression Nap.” The hashtag #LittleMiss now has over 41.4 million views and is overtaking the TikTok FYPs and Instagram Discover pages of Gen Z’ers everywhere.

“Little Miss” is attacking the internet — some are here for it, some are scared at how accurate the memes are. One commenter on @lyssavibe_’s “Little Miss” video said “realizing me, you, and the comments got a lot in common.” “Little Miss hitting too close to home” read another comment on a TikTok video from @titt1fuchalasgna. It’s obvious most of us have never had an original experience or thought in our lives.