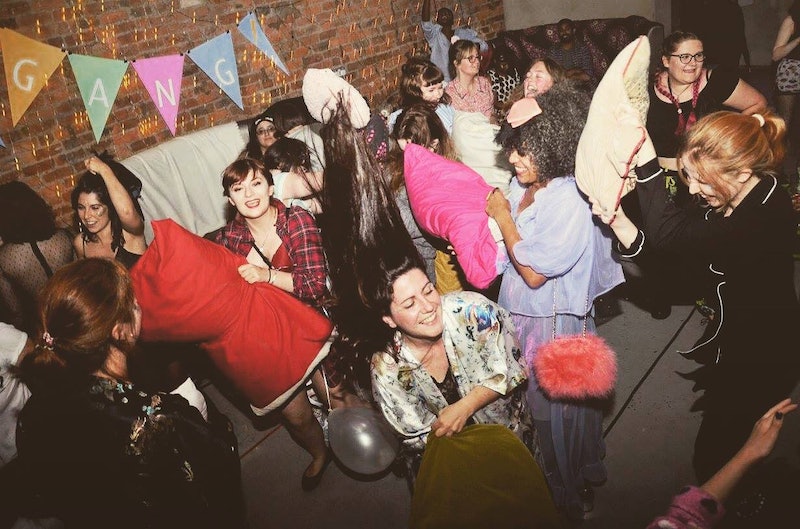 If there is ever a time to rally your girls around you and celebrate how truly awesome you all are then it is International Women’s Day. The girl power high priestess’ themselves, the Spice Girls weren’t kidding when they said "friendship never ends." However, adult friendship can also be a really complicated thing. When you've left uni and spend most of your life at work it begs the question how are you supposed to make new friends? For International Women’s Day I spoke to the Girl Gang who are combating urban loneliness by making friendship activism. If you are in need of a serious dose of girl power or want to get involved in a women’s movement that is all about bringing new people together then this is the gang you want to be in.

Cult classic movies, glitter clad nights out, and creative spaces full of inspiring, talented, smart women — it sounds like heaven, right? As otherworldly as it all sounds, Girl Gang has been bringing each of these things to a city near you for years. I caught up with the Head of Girl Gang Manchester, Megan Griffith and she says, “we are a collective of female artists, activists, academics, and party organisers. We put on events which are designed to build community and connection using creativity and collaboration.” She continued:

“We are all about celebrating the talents of women and bringing women together to celebrate their existing friendships, form new ones, rally around important causes, look at the talent in their cities, and create really authentic live experiences where people are empowered to be the best versions of themselves.”

Putting on creative club nights, performances, immersive film screenings, and skill sharing sessions to bring women together across four different cities is an awesome thing. So how did Girl Gang begin? Griffith explains:

“Girl Gang Sheffield was the first Girl Gang and that was founded by my best friend of 18 years. She came together with another girl to create an event. Through that they realised that there was a gap in the market and Sheffield was a bit of a boys club. They wanted to create something where women could take up space and have a space where they could really push what they were working on creatively without feeling like they were in competition with anybody else.”

After moving away from Sheffield to Manchester in 2016, Griffith started Girl Gang Manchester and, unsurprisingly, their empowering message and knack for bringing people together caught on. With collectives now in Sheffield, Manchester, Leeds, and Edinburgh, Girl Gang is a force to be reckoned with.

But the dilemma still stands, making friends as an adult can be really awkward. Girl Gang’s speed mating sessions may be the antidote to that. “Speed mating is like tinder but for friends in real life,” Griffith laughs. And she isn’t wrong. Set up in a similar way to speed dating with conversational prompts, Girl Gang are combating urban loneliness one awkward introduction at a time.

She says, “it is about encouraging radical vulnerability. Everybody has booked a ticket to an event called speed mating so they recognise that they want to expand their social circle and are feeling a bit lonely. But everyone there is in the same boat and is really receptive to one another.”

“We are about creating the nicest, most welcoming easy environment possible which will enable you to be the most comfortable, at ease natural version of yourself and then people don’t even notice that you’re stepping out of your comfort zone.”

There is nothing more invigorating and comforting than meeting like minded, ambitious, opinionated women — especially when you’re feeling lonely. Finding an appropriate structure for the organisation was also key. “I love bringing people together to create and share something. I feel like what is really important about Girl Gang is that it is a non-hierarchical creative space in which everyone is an artist and everyone feels part of it. We always say even if you have just attended an event rather than helped organise it, you are part of the gang.”

Things aren’t about to slow down for the Girl Gang that has spent the last four years bringing women together under creativity, fun, and feminism. Griffith tells me that from April 2 to April 11 Girl Gang Manchester will be airing an all-female cast version of Hamlet. She explains it isn’t a “comment on anything or about people playing men or it becoming a lesbian story line. It was just about giving women the opportunity to play the parts that they would never normally have the opportunity to play. People played them relatively gender neutral.”

If this International Women’s Day has got you feeling like you need to extend your Girl Gang just a little bit more — because who wouldn’t want that — then get yourself down to a speed mating session near you. Girl Gang Manchester will be running their next one on March. 11. Girl Gang Leeds will be celebrating International Women’s Day in a big way with a whole day of workshops, and Girl Gang Sheffield are serving all of the girl power vibes at their Wild Women DJ night on March.22. Promising “female DJ’s spinning female fronted babe music,” this is going to be a true celebration of the wild women of music.

It is hard not to come away from talking to Griffith about Girl Gang without feeling really inspired. I love the idea of women coming together to create things, take up space and have fun. At the core of it she tells me, “for me it is about solidarity and sisterhood and that wellness, resilience and happiness.”