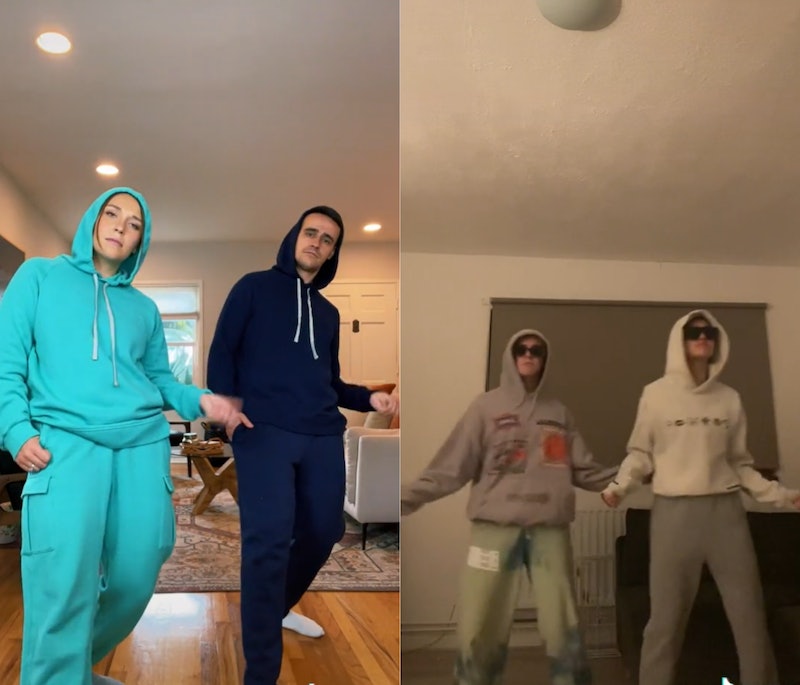 On a fine day in late March, Jack Harlow came to the internet to tease his new song “First Class,” featuring a sample of Fergie’s “Glamorous.” The comment section buzzed with sentiments like, “song of the summer” and “bop”, but then came New Music Friday. Fans were left slightly unimpressed by Harlow’s single and since then, TikTok has a new song with its unusual lyrics, “My money don’t jiggle jiggle, it folds,” as the song of the summer. Its unexpected vocalist? British-American journalist and voice behind the Grounded with Louis Theroux podcast, Louis Theroux.

The sound comes from one of the internet’s favorite series, Chicken Shop Date with Amelia Dimoldenberg, in which Dimoldenberg brings famous people to a fried chicken shop in England and asks them questions under the guise of a first date. Notable guests include Finneas, Jack Harlow, Charli XCX, and of course, Louis Theroux. In the viral clip, Theroux reflects on the time he wrote an original rap for an episode of his docuseries, Louis Theroux's Weird Weekends, in 2000.

His chicken shop performance went viral in March, when music producers @DukeandJones uploaded an auto tuned version of the clip to TikTok as part of their “adding autotune to random videos” series, giving the internet its presumed song of the summer. The original TikTok has 4.5M likes and 31.1M views, and the sound has been reshared in over 579,000 videos on the app.

The most contagious TikTok sound on the app right now goes like this:

I like to see you wiggle, wiggle, for sure /

It makes me want to dribble, dribble, you know /

Riding in my Fiat, you really have to see it /

Six feet two in a compact, no slack /

But luckily the seats go back /

I got a knack to relax in my mind/

On April 5, a dancing pair entered the stage with a choreographed routine to “My money don’t jiggle jiggle,” simple enough to be recreated thousands of times by the amateur dancers of the internet. The video gained so much traction that they created a new shared account, @brookeandjess_, and started calling themselves “The Jiggle Jiggle Girls,” with their bio alluding to the tune that helped them go viral, simply stating: “it folds.” Their original video has 3.8M likes and 25.9M views.

Soon after, one of TikTok’s most popular dancing couples, Austin and Marideth Telenko of @cost_n_mayor, uploaded their take on the “My money don’t jiggle jiggle” sound, cementing it as a certified bop. Their video, posted on April 16, now has 3.3M likes and 24M views.

TikTok’s new anthem doesn’t strictly apply to dancing videos. On the app, users are overlaying a variety of videos to the sound. One user, @catstocking, used the irresistible song to review the bounciness of her Squishmallow collection. Before you think, that’s niche, notice that the video currently has 4.5M likes and 23.1M views.

Now that the song is permanently implanted into your mind, you can actually stream it on Spotify. There are a number versions of “My money don’t jiggle jiggle” remixes on Spotify, though none come from the original creators, Duke & Jones. That said, you can join Duke & Jones’ half a million monthly Spotify listeners and stream some of their real bops, “This Could Be - Chill Mix” or “OK Not To Be OK - Duke & Jones Remix.”

Of course, if you simply want more of Louis Theroux rapping, BBC Two tweeted a clip of Theroux’s unreleased second verse in 2020. As they say, “It’s just as awkward as the first.”

More like this
Why TikTok Is Flooded With Controversial Videos About "Pick Me Girls"
By Courtney Young
Why Everyone Is "Soft Tagging" Friends On Instagram Right Now
By Alexis Morillo
This TikTok Song About An Unrequited Romance Has FYPs In Shambles
By Emma Carey
On TikTok, Tinned Fish Date Night Is The Latest Viral Food Obsession
By Emma Carey
Get Even More From Bustle — Sign Up For The Newsletter