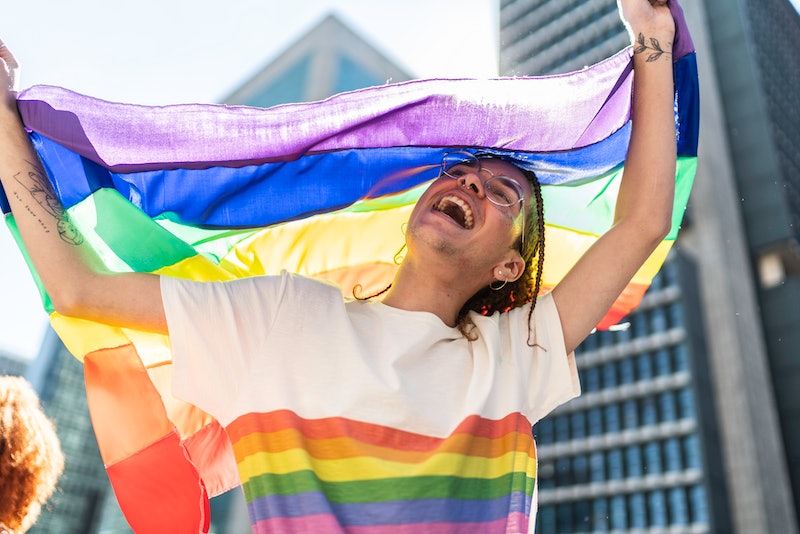 It's officially Pride Month, which means you're going to spend the next 29 days surrounded by all things rainbow. The rainbow pride flag, created in 1978 by gay activist Gilbert Baker, has occasionally gone through some cosmetic changes — including a petition to add black and brown to the flag to uplift queer people of color — but it is still the single most unifying and identifiable symbol of the LGBTQ+ community. The rainbow flag, however, is not the only queer pride flag around. To get prepared for Pride, here's 10 pride flags whose symbolism everyone should know.

In 2017, a month before his death, Baker spoke with ABC7, a local San Francisco news channel, explaining that gay rights activist Harvey Milk had been the one to approach him about creating the original rainbow flag, seeking a symbol under which the LGBTQ+ community could unite, something that "would take the place of the dreaded pink triangle used decades ago by the Nazis to identify homosexuals."

Baker told ABC7 he wanted to make a flag because "[f]lags are about power. Flags say something. You put a rainbow flag on your windshield and you're saying something." Baker ended up saying something with each color he chose to put on the flag: "Pink is for sex, red for life, orange for healing, yellow for sun, [...] green for nature, turquoise for magic, blue for serenity and purple for the spirit.”

“The point of the rainbow flag was that we were all together — all colors, types, and sexualities were represented,” Jonathan David Katz, Ph.D., an associate professor of Global Gender and Sexuality Studies at the University of Buffalo, previously told Bustle. “[Baker’s] initial thinking of the rainbow flag was that it would serve as an absolute marker of inclusiveness.” But over the years, Baker's original flag has since inspired dozens of other pride flags, representing a vast array of sexual orientations, romantic orientations, and gender identities. Chances are, if you go to Pride this year, you're going to spot quite a few of these 10 flags amongst the crowd.

This article was originally published on June 5, 2018