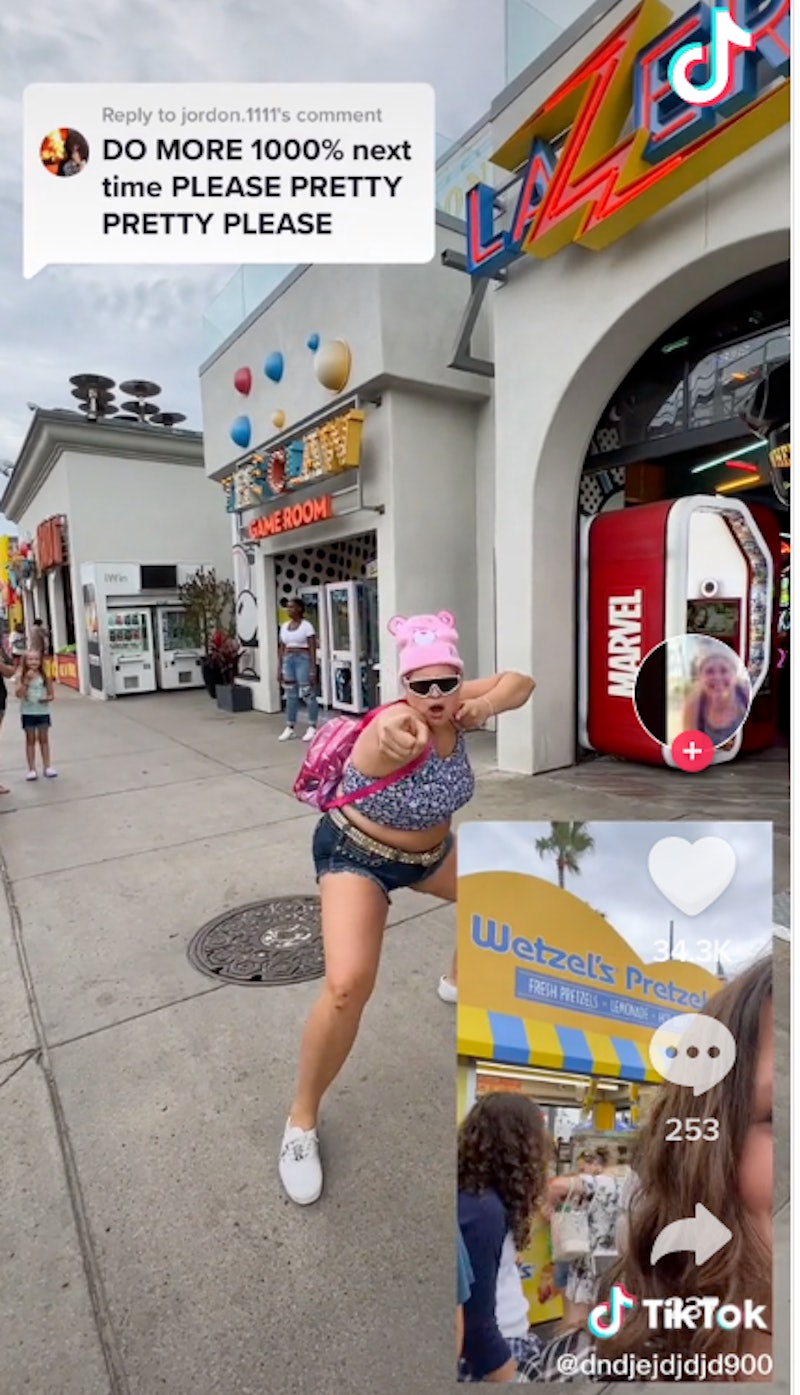 What would you do if while on your daily #HotGirlWalk or while shopping at Walmart, someone came up to you and said, “Can you hold my phone for a quick TikTok video?” Well, you should probably start asking yourself that question because you could very likely be the next to be included in the “Record Me” trend.

Since early April 2022, TikTok creators have gone up to random people while out in public and asked them if they could record whatever chaotic behavior they’ve concocted. Whether they start doing cringey dances at maximum energy, they scream “stop filming me” at the person they literally just handed their phone to, or start galloping around like a horse, TikTokers are taking this opportunity to channel their most chaotic selves and bring some quirky energy to the lives of complete strangers. Some people think it’s the most hilarious thing. Others are terrified and run away screaming. Honestly, I’d probably burst out laughing.

People aren’t quite sure where the trend came from, but there are some trailblazers that are taking initiative and keeping this trend alive for the fourth month in a row. Keep reading to understand where the trend came from, how people are connecting with the peculiarity of it, and even how to jump on the trend yourself. Basically, all you have to do is start doing everything you normally wouldn’t do in public. Some might know it as the “can you hold my phone” trend, but since April, the hashtag #RecordMe has been identified as the trend’s new name, with over 60.8 million views.

Where Did The #RecordMe Trend Come From?

One of the pioneers of this bizarre trend, @dndjejdjdjd900 on TikTok, started creating their “record me” content back in December of 2021. Their first video from December 16, 2021 showed the creator in a Walmart, prepared to unleash their tumultuous energy onto two shoppers just trying to checkout in peace. Once the phone is handed off to the two innocent bystanders, @dndjejdjdjd900 begins they skit — in which they found it quite hilarious that they brought their own water bottle to Walmart. After 23 full seconds of rambunctious behavior, the creator grabs their phone back and continues to cackle as they walk away from the two very confused participants. Chaotic, right? This original video now has over 3.2 million views.

The videos were only getting started from there. User @dndjejdjdjd900 continued to post “can you record me” content, whether they were sledding into a group of children, singing all the wrong words in “Don’t Cry For Me Argentina” in front of an expensive restaurant, or dressing up as Karen and crawling on the floor of a Walmart toward the person filming.

Their videos quickly went viral, with some getting upwards of 24.8 million views. They quickly began taking requests on their videos. One commenter told @dndjejdjdjd900 to sing the “Goofy Goober” song from “Spongebob Squarepants,” so they did just that. Dressed up as Squarepants himself, complete with the red tie and a yellow crop top, they went up to people in Target and children in a grocery store, and put on a show. A weird show, but a show nonetheless.

User @dndjejdjdjd900 has now been making “can you record me” videos for over six months — it’s kind of their shtick and those videos are even inspiring the young. TikTokers of all ages, especially younger children, are filling the creator’s DMs with their own takes on the trend of acting oddly in public while being recorded.

Since @dndjejdjdjd900 started a movement, creators have started creating their own complex storylines all to participate in the #RecordMe trend — needing to send a video to their mom, filming a school project, and more. @BigGuyJon, a video creator, has been making #RecordMe content since March 2022 — most likely inspired by @dndjejdjdjd900.

On July 22, 2022, Jon went up to a couple taking a relaxing boardwalk stroll and asked if they would hold his camera so he could send a video to his mom. Little did that innocent couple know that “his mom” was actually Jon’s 520.6K followers on TikTok. He quickly began trotting around like a horse while speaking in an unidentifiable accent. Jon’s followers were confused, but quite obsessed with his absurdity. One commenter said, “when I tell you I was not prepared, I WAS NOT PREPARED.” Another commenter shared, “you would’ve heard me cackling in the background to match the energy.” Other TikTokers, like @mufastamo, are participating in the trend by going up to strangers in store aisles.

Jon has been sharing #RecordMe content for over four months now and it’s clear that his followers are big fans. This incredibly strange trend feels achievable for many people just trying to bring some laughter to the lives of others. You don’t need to learn choreography, make a graphic, have 1.5 million followers, or share a ton of information about yourself online to participate in the #RecordMe trend. All you need to do is take your innermost intrusive, unconventional traits and showcase them to the world. At the heart of this unusual trend is authenticity.

TikTok creators like @dndjejdjdjd900 and @BigGuyJon are showing people how easy it is to be yourself, however quirky you may be. TikTok is a judgment-free zone and the #RecordMe trend just further proves that. So grab your phone, go to your nearest Walmart, Target, or movie theater, ask that everyday person to record you and don’t be afraid to unleash the beast within. Bring some laughter to complete strangers. I’m sure they could use some. Just maybe try not to give anyone a heart attack or make children run away from you.