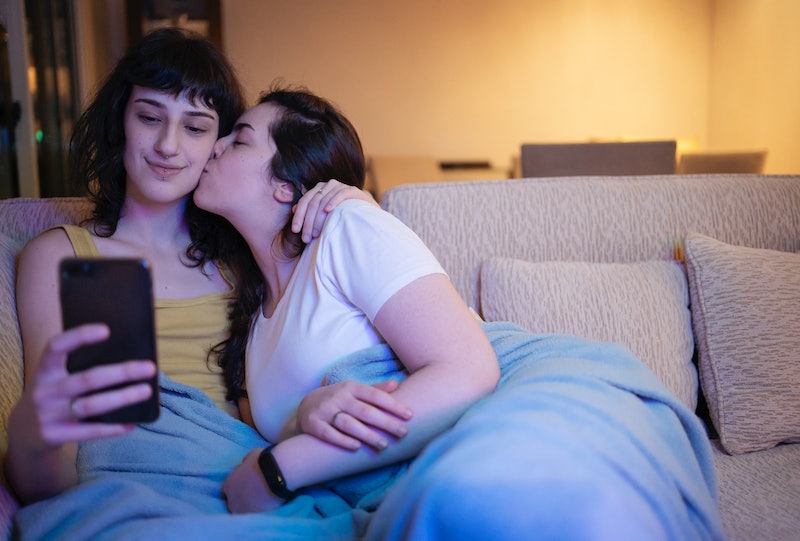 Opposites may attract, but that doesn’t mean that they’re meant to stay together. That’s the case with Taurus and Scorpio’s compatibility. When the zodiac’s bull and scorpion first meet, sparks are sure to fly. Scorpio’s opposite sign Taurus will be drawn to the water sign’s mysterious sensual appeal, while Scorpio will be highly intrigued by the bull’s ability to meet their intense gaze without backing down. But once the initial heat cools off, what you have left are two notoriously stubborn fixed signs who may be too different to make a relationship last.

Taurus and Scorpio differ from other opposite sign couples because they both have strong personalities. They both love hard, are set in their ways, and neither will back down from a fight. So when their relationship is good, it’s really good. When it’s bad, it’s really bad.

“Their relationship can be volatile, hostile, and emotionally draining,” Dr. Veroshk Williams, PsyD, certified astrologer and spiritual advisor, tells Bustle. “It might be a constant emotional and intellectual struggle. It also has the potential to bring a lot of self-doubts, which might lead to a debilitated sense of self for both.”

On the bright side, Taurus and Scorpio are fixed signs. As a result, they’re both loyal in relationships, so infidelity shouldn’t be an issue in this pairing. Plus, because they’re both highly protective and have a bit of a possessive streak, neither partner will feel smothered or get turned off by it.

Taurus and Scorpio’s sexual chemistry is off the charts. In fact, a strong sexual connection is most likely going to be the foundation of their relationship. As astrologer Arriana Fox tells Bustle, they’re very dynamic in the bedroom, kitchen, or wherever they choose to hook up. “This is not an area that will be an issue, as they tend to know how to share their sensual side,” she says. The Venus-ruled Taurus will love having a partner who’s so attentive and focused on pleasuring them, while Scorpio can relax and enjoy being with someone who isn’t afraid of their intensity.

Unfortunately, great physical chemistry can’t always keep a relationship together long-term. Emotionally, expect a lot of drama as both Taurus and Scorpio are very proud signs. “There’s a tendency to expect telepathy or mind reading capabilities in terms of who is feeling what and when,” Williams says. “Also, they tend to show each other emotional unavailability and detachment.” For these two, it’s like a battle of who can get the other to crack first.

When it comes to dating, Taurus and Scorpio make a challenging match due to their fixed stubborn nature. “They’re both determined to fulfill their own desires, which can make them compatible if they're both fighting on the same side or make them super incompatible if their desires clash with one another,” Inbaal Honigman, celebrity psychic and astrologer, tells Bustle.

Taurus is an earth sign so they enjoy being in familiar surroundings, and watery Scorpio tends to be the same way. If they’re on the same page and make the decision to commit each other, they can build a nice home and family life that lasts a lifetime.

A friendship between those two could be “a solid affair,” Honigman says. Both Taurus and Scorpio are very dependable signs, who can rely on each other to be present when times are hard. Both Taurus and Scorpio tend to be more guarded when it comes to romantic relationships but are more open when it comes to friendship. As long as the connection isn't romantic, those two can pull together and create a wonderful, lasting companionship.

“Both are very strong and determined signs, and they can help each other achieve their goals,” Honigman says. “Taurus Gigi Hadid and Scorpio Kendall Jenner are a pair who share more than their youth and gorgeousness. They are friends who are both ambitious and popular.”

Potential Problems In A Taurus-Scorpio Relationship

One of the biggest problems areas in a Taurus-Scorpio relationship is communication. There are a lot of “roadblocks and no exit alleys” with these two. “This can happen because they’re both stubborn, difficult, and can be unwilling to show repentance or even utter the words, ‘I’m sorry,’” Williams says. Scorpio has a tendency to behave like a “know it all” in relationships, which can lead to Taurus becoming very defensive. They may develop the type of connection where they’re always looking for ways to challenge each other — but not in the healthy way that allows each partner to grow.

Honigman adds their stubborn personalities can also get in the way. If they’re on opposite ends of an issue, it’ll be hard for them to find a middle ground. “Neither sign will be keen to listen to the other one, so they'll just talk at each other,” Honigman says. “The Taurus might be a bit more pleasant when talking, the Scorpio might be a little sarcastic, but it doesn't really matter, since nobody is listening.”

Are Taurus & Scorpio A Good Match?

Overall, Taurus and Scorpio are a challenging pair. But as with all zodiac pairings, no couple is doomed to fail. “A great deal of work will need to be done to keep a balance as both are potent signs and indeed opposite of each other,” Fox says. “So keep that in mind when trying to balance this relationship as the true balance is needed for a good long-term union.”