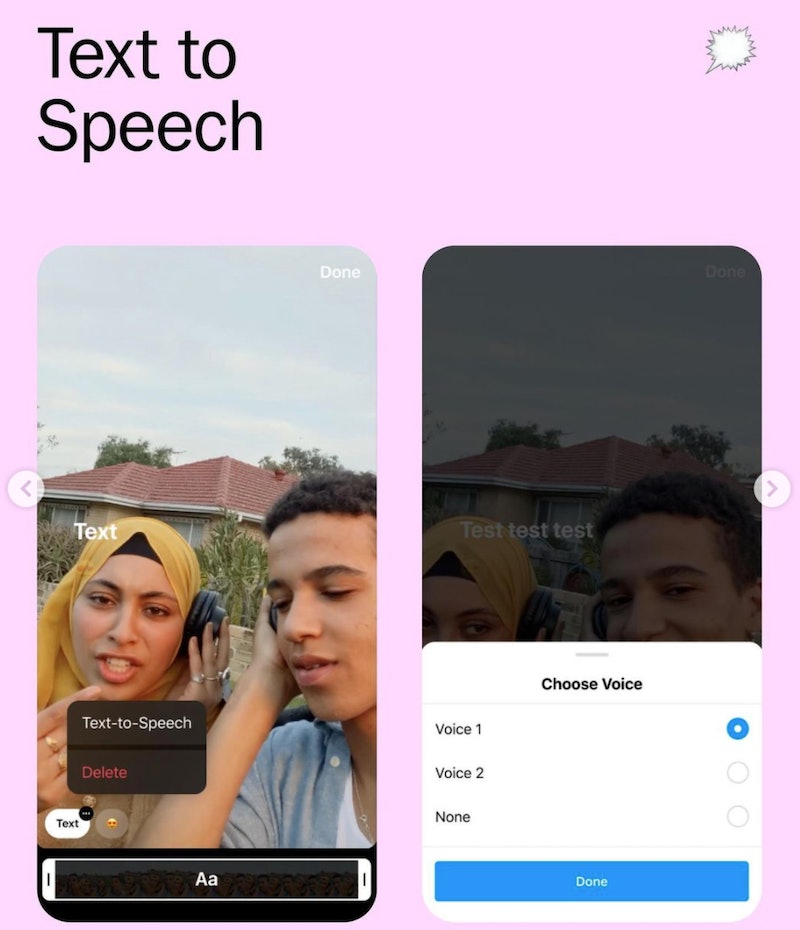 You still don’t have the courage to leave a voicemail on your best friend’s answering machine, so the chances of you using your own voice to narrate a video on social media are, well, non-existent. But if TikTok has shown us anything, it’s that a story time can sometimes be even more impactful when a cheeky automated voice recounts it. Reels users will likely get a lot of mileage out of a new text-to-speech and voice effect update on Instagram Reels that debuted November 12.

The text-to-speech feature allows you to use an automated voice to share your captions on your behalf, without ever opening your mouth. The new voice effect options for Instagram Reels bring your own recording to life, covering up your voice and replacing it with a special effect that makes it more interesting.

Here’s how to zhuzh up your Reels with animated voiceovers that don’t require you to overcome with stage fright.

Start a Reel the way you normally would. Tap the Reels icon in the center of the lower menu bar, then the camera button on the upper right corner. Record a video or upload one from your camera roll. Tap the text tool, and type out what you’d like the voiceover tool to read. Tap done, and then tap the three little dots on the text bubble to open up the two voice options. Tape done to seal the deal.

Other than not wanting to hear or immortalize your own voice, this feature allows you to quickly and discretely tell a story. If you’re not in an environment where you can record sound clearly, leaning on this automated feature takes the pressure off of recording the perfect audio.

You were brave enough to record your own voice, but the playback is making you cringe. To cover up your earnest attempt at speaking directly to your followers with a more playful effort, tap the music note after filming or uploading your video to open up audio controls. From there, you’ll be able to pick from helium, giant, vocalist, announcer, and robot effects — you can test them out in preview mode. Tap done to share.

Why Don’t I Have Text-To-Speech Or Voice Effects On Reels?

If you’re unable to find either of these features, fret not. Per Instagram, the roll out of text-to-speech or voice effects on Reels is ongoing. While the feature launched on Nov. 12, Instagram doesn’t make the update available to everyone all at once. Make sure you’re using the latest version of the app (and if you’re not, download it). To see if you’ve gotten text-to-speech or voice effects on Reels, just keep trying to use them by following the above instructions. Otherwise, be patient, and know your story time is coming soon.

More like this
The Real Reason Your Instagram Story Viewers Show Up In That Order
By Emma Carey
Behind The Hilarity Of The "POV: You Walk Into My Room" TikTok Trend
By Lexi Inks
How To Turn Off Night Mode On Your iPhone Camera
By Emma Carey
26 Ghost Story Podcasts To Get You Ready For Halloween
By Jessica Booth, Mia Mercado, JR Thorpe and Emma Carey
Get Even More From Bustle — Sign Up For The Newsletter