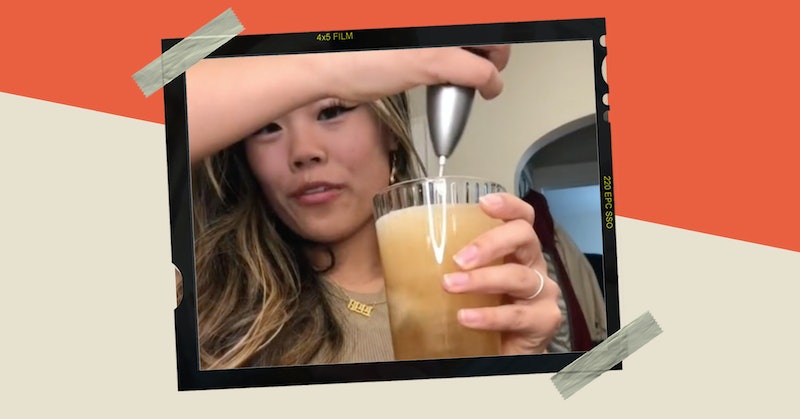 Even if you’re giving a new drink a try this summer — like a French 75 or a whiskey-based cocktail — sometimes the occasion calls for a hard seltzer. Think long weekends by the beach, day drinking by the pool, or enjoying a beveragino or two at the park with some friends. In those cases, you might be reaching for a pack of boozy seltzers and TikTok has a way to make enjoying them and all of their carbonation a little bit easier.

The video sharing app is full of hacks for making easy recipes or upgrading familiar foods, and hard seltzer is the latest to get the TikTok treatment. According to several users on the app, if you aren’t a fan of super bubbly or carbonated seltzers, having a milk frother could come in handy. Yes, I’m talking about that tiny kitchen tool you used to whip your coffee all 2020. Users are pouring the hard seltzer of their choice into a glass and taking a milk frother to it while being careful not to spill. After several seconds, the process is supposed to mellow out the bubbles and make the hard seltzer easier to drink and a little more sensitive on the stomach. It’s a great tip for people looking to enjoy a seltzer (or multiple) this season.

One user @taylor_unfiltered shared the tip on TikTok and received over 458,000 likes and 2,000 comments. On the video of her drinking a seltzer she added the caption “hack of the summer... ibs girlys froth your white claws no bloat but be careful it tastes like flavored water.” When people in the comments were asking how she did it, she said “yes froth it for like 30 secs and then it’s carbonation free.”

Another TikTok from @alanafischer98 shared the same hack, explaining that she uses a frother on her hard seltzers because while she likes the flavor, she doesn’t love the bubbles. “I hate drinking seltzers just because I feel so full [afterward],” she says in the video, before taking a swig after it’s been frothed. There’s no strict method to the hack, and Fischer simply frothed it “as much as she wanted” so you can try it out for yourself using a trial and error approach. Froth for a little bit, then take a taste to see if you want to mix it up even more for better results.

To try out this viral hack for yourself, all you need is a can of seltzer — boozy or not — and a handheld milk frother like the one you might use for coffee. If you don’t have a frother, this best seller on Amazon is $20, available for Prime two-day shipping, and has thousands of five star reviews. Get your hands on one of these simple gadgets and happy frothing.

Zulay Original Handheld Frother
Amazon
Zulay original handheld frother
More like this
I Tried The $20 TikTok Viral Oishii Strawberries — Here's What I Thought
By Sophie Hanson
On TikTok, A ‘Snackle Box’ Is The Best Way To Pack Charcuterie On-The-Go
By Meguire Hennes
Trust Me, Pickle Martinis Are The New It Drink Of The Season
By Emma Carey
The Finger Lickin’ Good KFC x HYPE Collab Serves A Bucket Bag For Chicken
By Darshita Goyal
Get Even More From Bustle — Sign Up For The Newsletter

This article was originally published on June 30, 2022